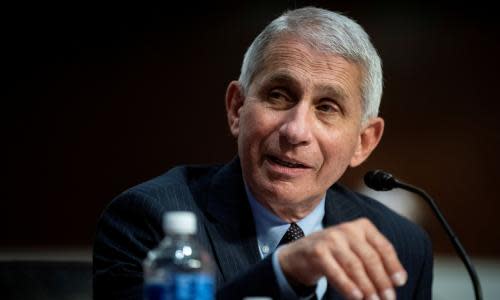 Top US public health expert Anthony Fauci warned on Tuesday that the global coronavirus outbreak could be as bad as the 1918 flu pandemic, calling that catastrophe “the mother of all pandemics”, which killed more than 50 million people worldwide.

Facing increasing attacks from Donald Trump and White House officials, Fauci spoke to Georgetown University students in Washington on Tuesday about the coronavirus pandemic and its risks to young people.

Related: ‘A slap in the face’: how racial bias dogs US coronavirus response at every level

“We have a serious situation here in the United States,” Fauci, director of the National Institutes of Allergy and Infectious Disease, said at the online event.

The US has so far witnessed more than 3.4m cases of Covid-19 and more than 136,000 deaths, with cases now rising in 37 states; record numbers of new cases in Florida, Arizona and Texas; and California shutting down many businesses statewide after recent reopenings.

Fauci warned students at Georgetown that young people must not be “part of the problem”.

“There is an understandable situation where a young person could say, ‘You know, statistically the chances of my getting into trouble by getting infected are much smaller than an elderly person,’” he said.

Many young people, he said, might feel they would “rather be there sipping a margarita in a crowd”, but “to get it under control means you don’t let yourself get infected, and you don’t spread to anybody else”, Fauci said.

It was another instance of the senior public health official, who has been barred from major media appearances in recent weeks, finding other ways to address the public.

In another talk on Monday with Stanford University’s medical school, for example, Fauci, America’s leading infectious disease expert, called for a “step back” in state reopening efforts as cases and deaths continue to rise.

According to researchers at Johns Hopkins University in Maryland, the US has recorded more than 3.3m cases of Covid-19, and more than 135,000 deaths.

“We haven’t even begun to see the end of it yet,” Fauci said.

Last week, Fauci told the Financial Times he had “a reputation of speaking the truth at all times and not sugar-coating things”, which he said he thought might complicate his relationship with the president and other White House officials.

He also said he had not briefed Trump in months and had not seen the president since the beginning of June.

The White House then turned on Fauci, attempting to discredit him by disseminating a list of statements made to media outlets which it said were in error.

According to ABC News, Fauci, 79, has been referred by top Trump aides as “Dr Gloom and Doom”. On Monday, Trump insisted he liked Fauci “personally”, and said: “I find him to be a very nice person. I don’t always agree with him.”

“There are a number of scientists who are experts in various issues,” McEnany said, “and various specialties, but the president takes the full opinions of the taskforce and the varying opinions sometimes and moves forward in the way he thinks is best for the country.”

McEnany did not deny the White House sent the material, however, saying instead it was a response to an inquiry from the Washington Post.

A majority of states are seeing increases in coronavirus cases and deaths. On Monday, the US reported 61,492 new cases, the second-highest day on record. Republican-led states such as Texas, Florida and Georgia have reported record daily totals. Montana, North Dakota, Hawaii, Alaska and Idaho are among states seeing the fastest daily increases.

Trump supporters and anti-government groups have accused Fauci, who has served under every president since Ronald Reagan, of being part of a “Deep State” conspiracy, working against the president.

Nonetheless, Fauci has maintain a higher approval rating among the public than members of the administration. A New York Times poll, for example, found that 67% of respondents trusted Fauci’s handling of the coronavirus outbreak compared with only 26% who trusted Trump.

Recent polling indicates that three in five Americans think that the “worst is yet to come”.

COVID-19 vaccine passports sound innocuous till you consider the implications