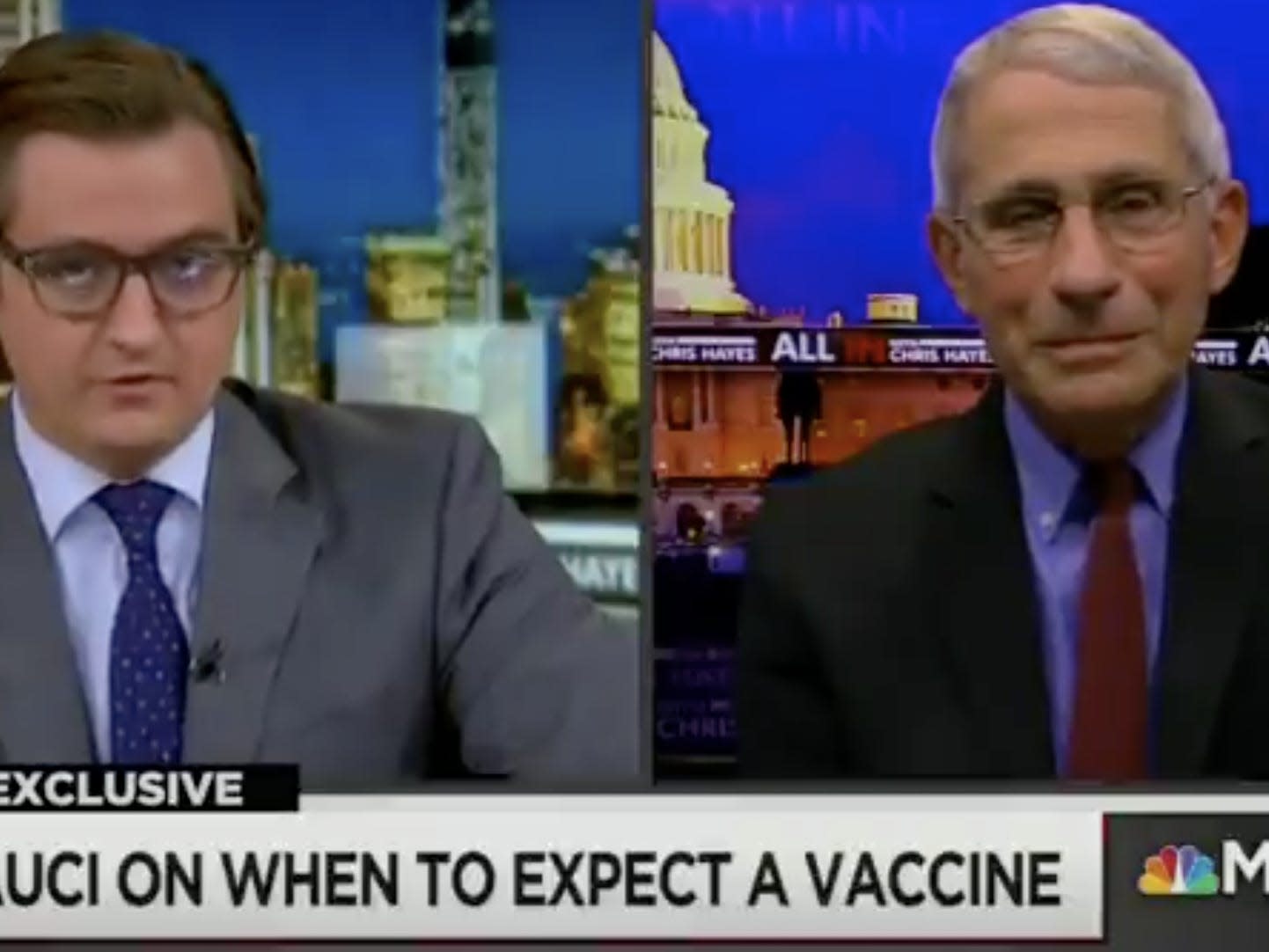 Dr. Anthony Fauci replied in the affirmative on Thursday when asked by MSNBC’s Chris Hayes whether he would “take the heat” for any problems with a vaccine.

This week, CDC Director Robert Redfield and President Donald Trump clashed over the timing of a vaccine.

Redfield projected that a vaccine wouldn’t be widely available until the new year — a sentiment largely echoed by health experts — but Trump argued one could come sooner.

Dr. Anthony Fauci, the leading US infectious-disease expert, has pledged to “take the heat” for any problems with a vaccine for COVID-19.

“Do you assure all of us that if the corners have been cut, if there is something sideways or wrong with the process, that you will tell us and take the heat for that?” MSNBC’s Chris Hayes asked Fauci during an interview Thursday.

He responded: “The answer, Chris, is yes.”

Fauci’s comments come amid concern that President Donald Trump is politicizing public-health departments and may seek to rush through a vaccine in time for November’s presidential election.

In an interview published Thursday with Business Insider’s Hilary Brueck, Fauci said he was confident there would be a “safe and effective vaccine” available by the end of 2020.

He told Brueck: “I said November, December — others say October. I think it’s unlikely in October, but maybe, you never know. But let’s say a safe bet will be the end of this calendar year.”

The timeline is more cautious than the preelection forecasts given by Trump. Fauci also noted that it would take until sometime in 2021 for most people to actually receive a vaccine even if some doses were ready earlier.

But, in common with his MSNBC interview, Fauci has emphasized that any vaccine rolled out will be safe.

Not everyone is so confident. A former top official on the White House coronavirus task force, Olivia Troye, this week told The Washington Post that she would not trust a vaccine rolled out before the election.

“I would not tell anyone I care about to take a vaccine that launches prior to the election,” she said. “I would listen to the experts and the unity in pharma. And I would wait to make sure that this vaccine is safe and not a prop tied to an election.”

Trump has suggested, including in a Fox News interview this week, that a vaccine will be widely available ahead of November 3.

He has signaled a fast vaccine despite statements to the contrary from his own administration’s top public-health officials.

In testimony to Congress this week, the Centers for Disease Control and Prevention’s director, Robert Redfield, said a vaccine would not be able to usher in a return to “regular life” in the US before late 2021.

“If you’re asking me when is it going to be generally available to the American public, so we can begin to take advantage of vaccine to get back to our regular life, I think we’re probably looking at third, late second quarter, third quarter 2021,” Redfield told the Senate Appropriations Committee on Wednesday.

Trump rejected Redfield’s claims at a White House press briefing, claiming that Redfield was “confused” and that the vaccine would be made widely available sooner.

In an interview with the Washington, DC, outlet WTOP on Thursday, Fauci refused to take a side in the dispute, telling the network “in many respects, they were both right.”

His subsequent comments to the network, however, were more closely aligned with Redfield’s projection.

Don't Miss it Idaho pastor who known as himself ‘no-masker’ in intensive care with Covid-19
Up Next Coronavirus: White Home targets US illness chief Dr Anthony Fauci – BBC Information