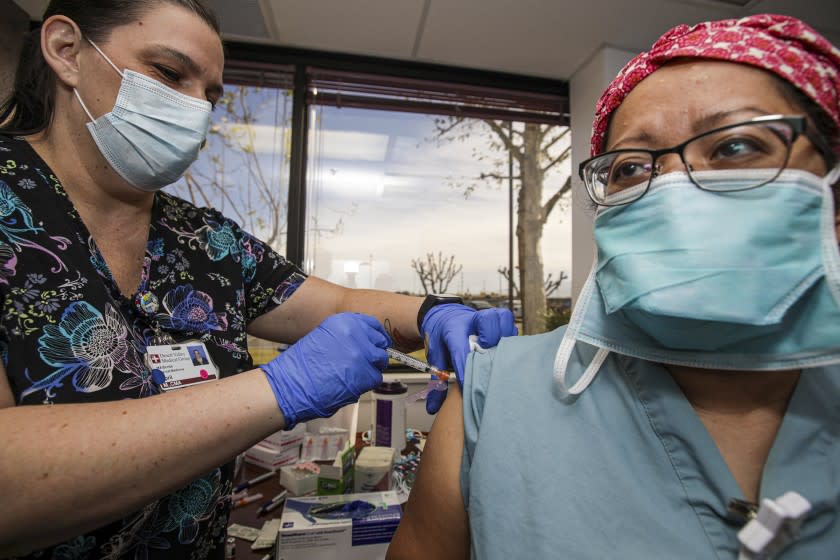 Severe allergic reactions to the COVID-19 vaccine made by Pfizer and BioNTech were “rare” in the first 10 days of its rollout across the country, according to a new report from the Centers for Disease Control and Prevention.

A total of 21 cases of anaphylaxis — none of them fatal — has been confirmed among nearly 1.9 million doses administered, CDC researchers wrote Wednesday in the Morbidity and Mortality Weekly Report. That works out to 11.1 cases per 1 million doses.

Anaphylaxis is a severe allergic reaction that can be triggered by a vaccine, as well as by food, medication, insect stings and latex. The reaction can be fatal if not treated immediately, typically with an injection of epinephrine to open airways in the lungs.

The reports of anaphylaxis and other side effects to the Pfizer-BioNTech vaccine were made to the Vaccine Adverse Event Reporting System (VAERS), which is maintained by the CDC and the Food and Drug Administration to keep track of safety issues once a vaccine is made available to the public.

Pfizer-BioNTech’s COVID-19 vaccine was the first to receive emergency use authorization from U.S. regulators, and the first doses went into the arms of frontline healthcare workers Dec. 14. The new CDC report is based on 1,893,360 doses administered through Dec. 23.

Among the 21 people who suffered anaphylaxis, 17 had a history of allergies, including seven people who’d had anaphylactic reactions before.

Seventeen of the 21 patients were treated in emergency rooms and four patients were admitted to a hospital. Three of those hospitalized patients required intensive care.

Twenty of the patients had recovered by the time their cases were reported to the Vaccine Adverse Event Reporting System. Details about the 21st patient weren’t known, but the CDC researchers noted that there have been no reports of anaphylaxis-related deaths linked to the Pfizer-BioNTech vaccine.

The 21 patients ranged in age from 27 to 60, with a median age of 40. Nineteen of them — or 90% — were women. The report authors noted that among cases where the sex of a vaccine recipient was known, 64% were women. They also pointed out that women were more likely to have an “immediate hypersensitivity” to the H1N1 influenza vaccine during the 2009 flu pandemic.

After receiving the COVID-19 vaccine, the fastest anaphylactic reaction came on after just two minutes, and the slowest appeared after 150 minutes. The overwhelming majority of reactions came quickly, with 15 happening within the first 15 minutes of the injection and three more occurring between 15 and 30 minutes.

Nineteen of the patients were treated with epinephrine.

The 21 cases were not clustered in any single geographic area, and they were tied to doses from multiple lots of the vaccine.

Among the other cases of allergic reactions, more than four out of five were considered “nonserious.” The most common reactions reported to VAERS were rash or itchy skin, an itchy or scratchy throat, and mild respiratory symptoms. Half of these reactions occurred within 12 minutes of receiving the vaccine, and 90% of those who suffered them were women.

Overall, VAERS received 4,393 reports of adverse events of any kind during the first 10 days of the Pfizer-BioNTech vaccine rollout, according to the report. That’s a rate of 0.2%.

The CDC has already updated its guidelines for administering the vaccine and a similar one developed by Moderna and the National Institutes of Health, which received emergency use authorization a week after the Pfizer-BioNTech product. That guidance includes:

• Make sure epinephrine is on hand and ready to use at vaccination sites.

• Ask potential vaccine recipients about their history of allergic reactions to identify those at high risk.

• Keep people under observation for up to 30 minutes after they receive the vaccine so that cases of anaphylaxis can be treated quickly.

• Make sure that healthcare providers giving out the vaccine are trained to recognize the early signs of anaphylaxis.

• Give an intramuscular injection of epinephrine immediately if anaphylaxis is suspected.

The first doses of the Moderna vaccine were administered Dec. 21, and fewer than 225,000 doses had been given out during the 10-day period of this study. A separate report on its side effects is in the works, the CDC researchers said.

Don't Miss it Extreme allergic reactions reported within the US after getting COVID-19 vaccine, however CDC says instances are uncommon
Up Next Wave Compact Cool Mist Vaporizer Set [Includes Accessories and Carry Bag, Suitable for Home or Travel Use]