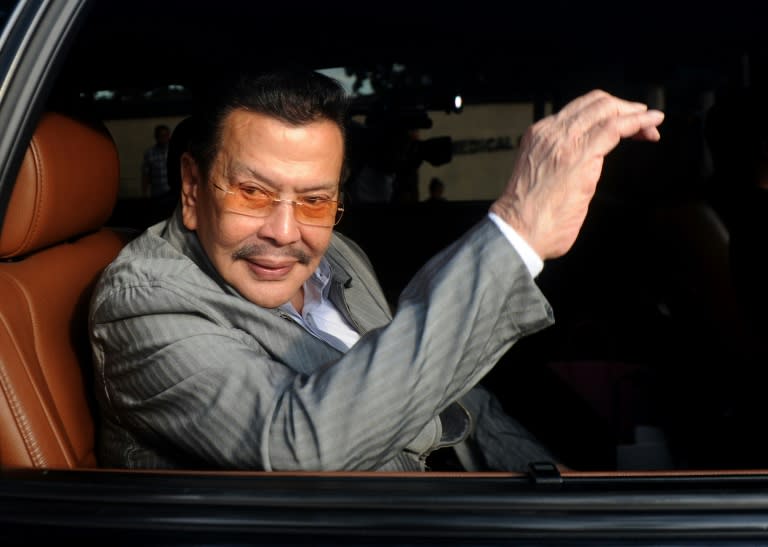 MANILA, Philippines (AP) — Former Philippine President Joseph Estrada has been put on a ventilator in a hospital to help him breathe after being infected by the coronavirus, his son said Tuesday.

The 83-year-old Estrada, the most prominent Filipino politician to test positive for COVID-19, was hospitalized more than a week ago and initially was recovering well, said his son, former Sen. Jinggoy Estrada.

But on Monday, “my father’s condition suffered a setback,” he said in a medical bulletin posted on Facebook, adding that doctors decided to put the former president on a ventilator “to improve oxygen delivery as well as to prevent the tiring of his respiratory mechanism.”

“My father has always been a fighter and I hope that with the help of your prayers, he will win this battle,” he said.

Another Estrada son, former Sen. JV Ejercito, also appealed for prayers, saying in a tweet that “COVID is unpredictable.”

Estrada, a former action film star and long-time politician, won the presidency in 1998 with one of the largest margins in Philippine electoral history. But his six-year term was cut short after he faced allegations of plunder and was ousted in January 2001 during massive protests. He denied the charges, which he said were fabricated by his opponents.

A special anti-graft court convicted him of plunder in 2007. His successor, Gloria Macapagal Arroyo, pardoned him in a move that restored his civil and political rights and allowed him to make an unsuccessful second run for the presidency in 2010. He won election as mayor of Manila in 2013 and has been out of politics since his term ended in 2019.

Separately, Defense Secretary Delfin Lorenzana, who is leading efforts to deal with the pandemic in the Philippines, said he tested positive for the coronavirus Tuesday and would go into isolation. The 72-year-old retired army general, who said he is experiencing no symptoms, is one of several members of President Rodrigo Duterte’s Cabinet who have contracted the disease. Lorenzana’s Cabinet colleagues have all recovered.

Duterte has placed the Manila metropolis and four outlying provinces, a region of more than 25 million people, back under lockdown amid an alarming spike in infections. The Philippines has reported more than 812,000 COVID-19 cases, including 13,817 deaths, the second highest totals in Southeast Asia after Indonesia.

WHO official lavishes praise on China for coronavirus response