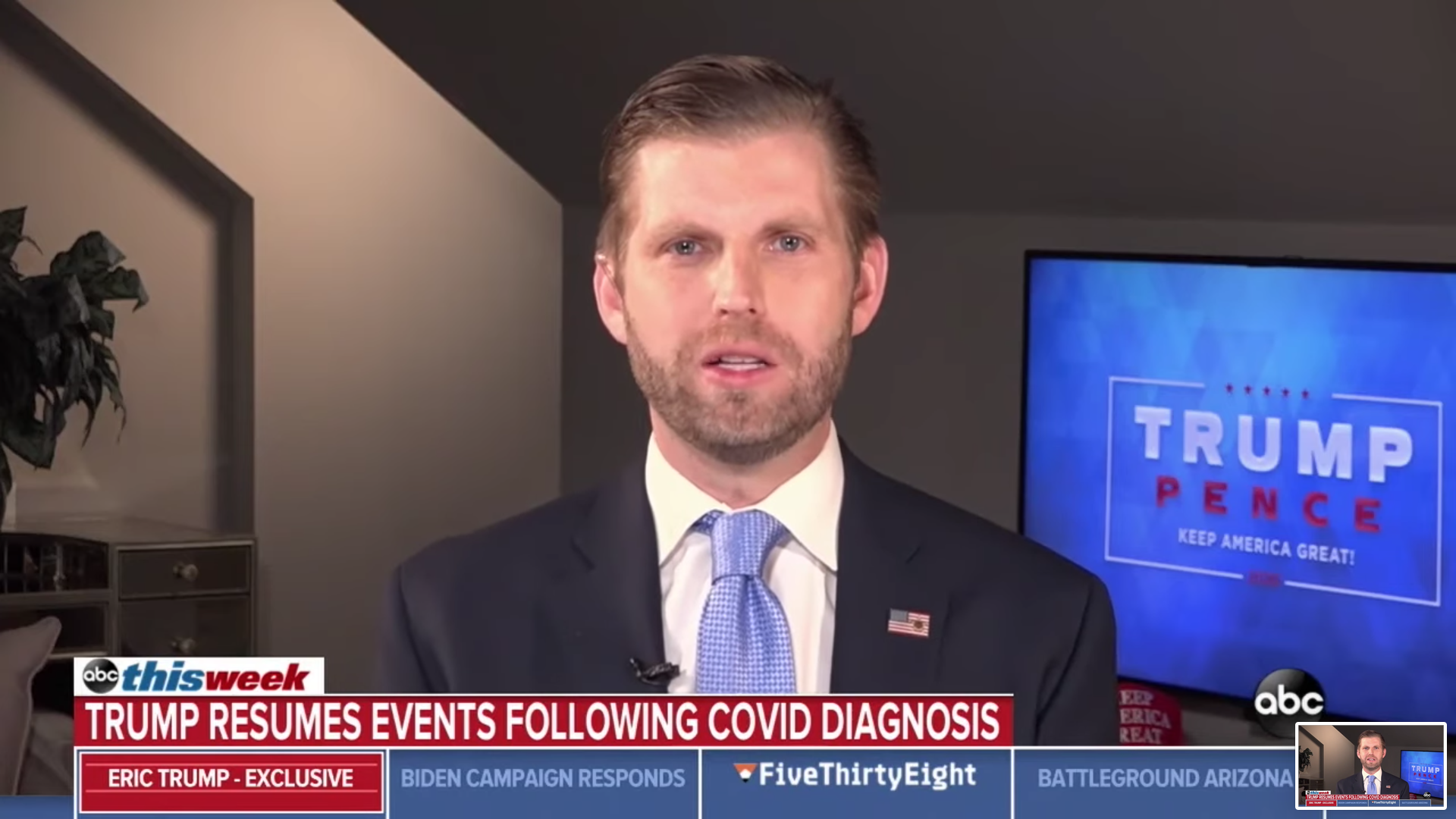 Eric Trump appeared on ABC’s The Week on Sunday (ABC)

Eric Trump has been mocked online for claiming that Donald Trump has taken a vaccine for Covid-19 – a vaccination that does not yet exist.

Eric, 36, appeared on ABC’s This Week on Sunday morning.

He was asked about his father’s recovery following his October 1 positive test and his three nights at Walter Reed, returning to the White House on October 5.

Eric said his father’s progress had been “amazing”.

“I’ll tell you, it was amazing,” Eric said. “It actually probably goes to speak to how good some of these vaccines are being created are.

“My father literally started day one creating this vaccine. He worked to push this vaccine and now my father just took it! And you see how well he got over it and I think it’s an inspiration. As Americans, we should be very proud of that.”

The host, Jonathan Karl, responded: “Can you clarify that? You say your father just took a vaccine?”

Eric replied: “Meaning, when he was in Walter Reed. The medicines that he was taking.”

Eric concluded: “I think it goes to show the power of medicine in this country and how far we’ve come on Covid.”

Eric was asked how serious his 74-year-old father’s condition was.

“That first day he got hit hard,” Eric replied. “I can tell you as a son. It’s never fun watching your father fly up to Walter Reed on Marine One, right? That’s a day that no son wants remember.”

Eric’s claim that his father had been given a vaccine – still considered many months away – was mocked on social media.

A healthcare worker tweeted: “Will someone please try to explain to dumbass Eric Trump what a vaccine is?”

One described it as “a painful reminder that there is still no vaccine for stupidity.”

Another, more generously, tried to give Eric the benefit of the doubt.

“Did Trump actually take a vaccine, or does Eric not know the difference between a therapeutic and a vaccine?” she asked.

Andrew Kaczynski, reporter with CNN’s K File, pointed out that Eric had made the claim before.

On Wednesday Eric told a radio station that his father had received “a vaccine”.

Will someone please try to explain to dumbass Eric Trump what a vaccine is?

Eric Trump’s hot takes on how drug development works this morning are a painful reminder that there is still no vaccine for stupidity.

Did Trump actually take a vaccine, or does Eric not know the difference between a therapeutic and a vaccine?

? Eric Trump in this local VA interview from Wednesday says his father was on a COVID vaccine that “knocked it out in 24 hours.”

“There’s never been vaccines that were created so quickly, my father was just on one of them…it knocked it out in 24 hours.”https://t.co/GkVncJqbl6