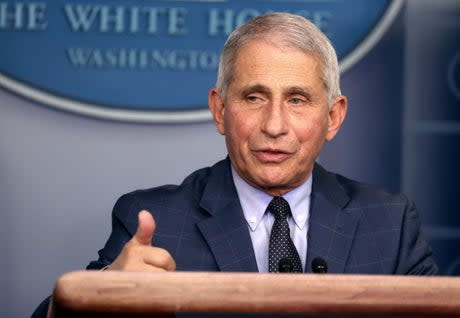 Dr Anthony Fauci said on Thursday it is ‘liberating’ to work for Biden instead of Trump. (Getty Images)

Dr Anthony Fauci, the director of the National Institute for Allergy and Infectious Diseases, is opening up about his experiences as a scientist under the Donald Trump administration, calling the president’s pressure campaigns “chilling.”

Dr Fauci appeared on MSNBC’s ‘The Rachel Maddow Show’ and recalled scientists working with the White House who felt they could not tell the truth because Mr Trump and his officials wanted to project an image of the pandemic that suggested everything was under control and improving.

“I didn’t want to be at odds with the president because I have a lot of respect for the office of the presidency, but there was conflict at different levels with different people and different organizations and a lot of pressure being put on to do things that just are not compatible with the science,” Dr Fauci said.

He said he – and other scientists – were pressed into “a situation where science was distorted and/or rejected,” and said the experience was unique to Mr Trump’s administration.

“It’s a real aberrancy,” he said. “This is my seventh administration, Rachel, and I’ve been advising administrations and presidents on both sides of the aisle, Republicans and Democrats, people with different ideologies, and even with differences in ideology, there never was this real affront on science. So it really was an aberrancy that I haven’t seen in almost 40 years that I’ve been doing this. So it’s just one of those things that is chilling when you see it happen.”

Dr Fauci has re-emerged as the face of the government’s response to the coronavirus following what was essentially a banishment under the Trump administration. At the onset of the pandemic, Dr Fauci was a very visible member of the White House response and frequently appeared at press briefings and on cable news.

As an image of Dr Fauci as an “adult in the room” emerged and he began to contradict Mr Trump’s rosy predictions and attempts to hawk questionable cures, he was sidelined. At one point Mr Trump openly considering replacing Dr Fauci.

The doctor told Rachel Maddow he had been banned from appearing on her show under Mr Trump’s administration.

He said under the Joe Biden administration he expects more transparency.

During a press briefing earlier this week, Dr Fauci told reporters he felt more free to speak openly and to let science stand on its own.

“I can tell you I take no pleasure at all in being in a situation of contradicting the president, so it was really something that you didn’t feel you could actually say something and there wouldn’t be any repercussions about it,” Dr Fauci said. “The idea that you can get up here and talk about what you know, what the evidence and science is, and know that’s it — let the science speak — it is somewhat of a liberating feeling.”

Fauci says ‘liberating’ to be able to talk about science now

Fauci: Biden admin to be ‘honest’ on Covid – unlike Trump regime

Syrian refugees need our support now more than ever

With COVID-19 and delta variant surging, Missouri must masks up once more

Specialists Supply Suggestions for Protected Intercourse in Occasions of Covid-19