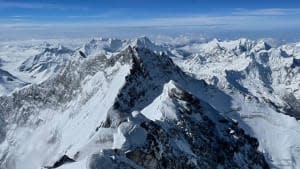 COVID-19 did what many climbers have been unable to do — the virus made it to the top of Mount Everest.

After speaking with Sherpa guides, expedition companies, and climbers, The New York Times estimates that by the end of climbing season in early June, at least 59 people infected with COVID-19 had been on Mount Everest. If you ask Nepal’s tourism officials who oversee Everest expeditions, however, they say that no one with COVID-19 was ever on the mountain, explaining the illnesses away as pneumonia or coughing due to the dry air.

It’s likely that Jangbu Sherpa, 38, was the first person with COVID-19 to reach the top of Mount Everest, the Times reports. He was hired to help a Bahraini prince climb the mountain, and in April, became sick at base camp. After his fever and cough got worse, the company that hired him airlifted Sherpa to a Kathmandu hospital, where he tested positive for coronavirus.

He spent nearly two weeks in the hospital and recovering at home, but returned to work because experienced guides were hard to find, and the expedition company did not want to lose thousands of dollars. Still fighting the virus, he led the prince and 15 others to the summit on May 11.

Nepal, one of the poorest countries in the world, depends on billions of tourism dollars from climbing and treks. Expeditions were called off in 2020 because of the pandemic, and Nepal needed the money this year, the Times reports. In Nepal, not even 3 percent of the population is fully vaccinated against COVID-19, and few Sherpas were inoculated when the climbing season began.

To climb, people had to test negative for the coronavirus, and there was more testing, mask wearing, and social distancing on the mountain. Still, people were becoming sick from the virus, and many were pressured to hide their infections, climbers and expedition companies told the Times. There were 408 foreign climbers this year, and almost half bowed out due to COVID-19 infections and snowstorms caused by a cyclone.

After four years of training, Mario Celinic of Croatia made it to Mount Everest then tested positive for COVID-19 at base camp. He told the Times he didn’t have symptoms, so decided to still climb, likening Mount Everest to “a beautiful flower that will kill you anytime.” Read more at The New York Times.

When Pride is filibustered