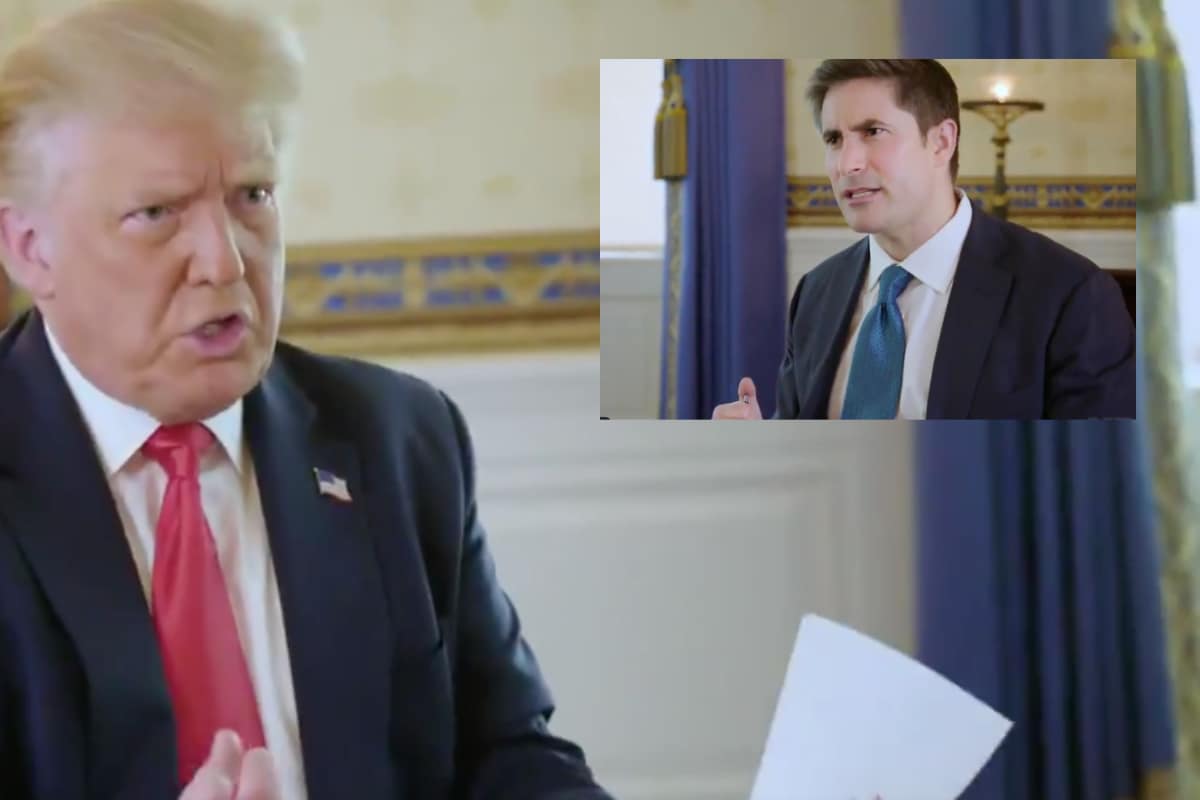 Donald Trump was once agains seen arguing with a journalist during an Axios video for HBO | Image credit: Twitter

Donald Trump tried to argue that the US was doing better than the world when it came to deaths in proportion to cases but could not answer why deaths were higher in proportion to the US population.

The United States President Donald Trump is no stranger to arguing with journalists. This time he has done it again during an Axios interview aired on HBO in which he tried to claim that the US was doing better than the rest of the world in terms of coronavirus.

In an interview with journalist Jonathan Swan, a visibly tense and stressed out Trump can be seen sitting hunched with a sheaf of graphs in his hands, trying to convince the journalist about the US’s stellar performance in containing coronavirus.

When the journalist asked Trump what the category the US was lowest in, he handed him a graph.

Rattled at the question, Trump lashed out saying, “You can’t do that”.

At first, he refused to understand the question and when Swan chose to quote the example of South Korea which he said had 300 deaths in proportion to its 51 million population, Trump refused to believe that number.

He went on to stress that the only reason the United States had a higher number of cases was that it had higher testing.

“You don’t know that,” Trump told the journalist.

The video has been going viral on the internet with several people leaving disbelieving comments about the President’s lack of sound information and his attempts to whitewash the situation in the US which has so far recorded over 1 lakh 58,000 deaths due to the virus and over 4.7 million confirmed cases.

Not one ounce of sympathy for the sick and dying. No regrets, no shame.Just number crunching.As always it’s only about him, he always has to be right. Always in denial.He is one sick psychopath https://t.co/8hntFPl7zB

Many praised Swan for holding his cool while Trump desperately tried to rattle him with statistics and even question his journalistic skills. Other non-American Twitter users wondered if such questioning of the head of the nation with a will to hold him accountable was indeed commendable and much needed in other parts of the world as well.

One user wrote, “Journalism. It can be a beautiful thing”.

Jonathan Swan handles this so well. This both hilarious and horrifying. Trump is a desperate idiot. He is such a trainwreck here. It would be pathetic to defend him here. He is just incredibly wrong. This is a complete meltdown. WOW. https://t.co/F1eiqGRzCp

Coming at a when the US recorded a quarter of the global total of cases, Trump’s comments were widely critiqued. Despite Trump’s claims of all being well and under control, data recorded by the New York Times showed a spike in deaths in 30 states across the US.

Again to highschool? Most main colleges are heading towards on-line class as COVID-19 instances spike

An individual who knowingly went to work whereas sick probably led to the COVID-19 deaths of seven individuals and compelled greater than 300 individuals into quarantine, well being officers say