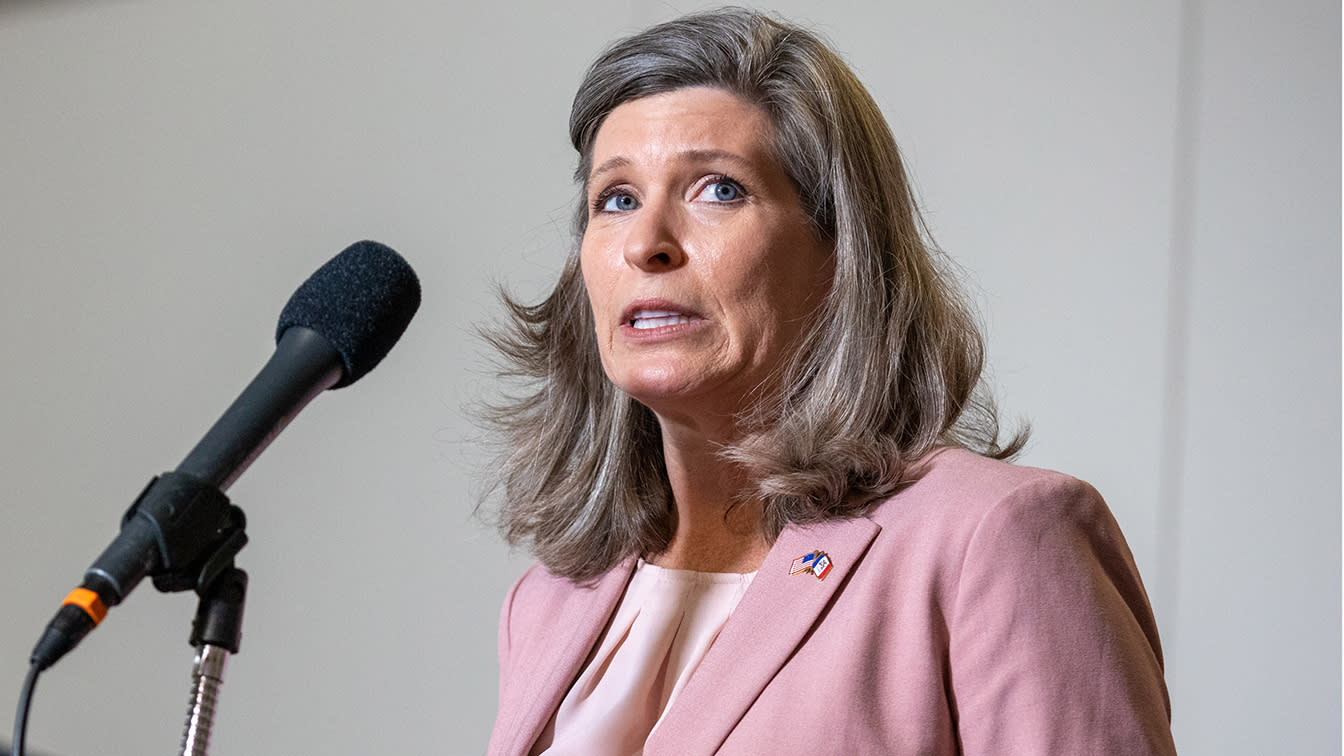 Earlier this week, Iowa Republican Sen. Joni Ernst became the first member of “the world’s greatest deliberative body” to embrace a false online conspiracy theory that seeks to minimize the danger of COVID-19 by claiming only a few thousand Americans have died from the virus — not the 185,000 reported by state and local health agencies and hospitals.

Ernst, who described herself as “so skeptical” of the official death toll, even went so far as to echo the nonsense argument spread by QAnon and other right-wing conspiracy-mongers that medical professionals who have risked their own lives and health to treat COVID-19 patients have been attributing non-COVID deaths to the virus to rake in extra cash from the federal government.

“These health-care providers and others are reimbursed at a higher rate if COVID is tied to it, so what do you think they’re doing?” Ernst, who is facing a tight reelection race, said Monday at a campaign stop near Waterloo, Iowa, according to a report by the Waterloo-Cedar Falls Courier.

“They’re thinking there may be 10,000 or less deaths that were actually singularly COVID-19,” Ernst added in an interview with the paper. “I’m just really curious. It would be interesting to know that.”

Since Ernst is “really curious,” here are the facts.

Yes, Medicare pays hospitals more for treating COVID-19 patients — 20 percent more than its designated rate, to be exact. Incidentally, this additional payment was approved 96-0 in the U.S. Senate — including by Joni Ernst. The reason Ernst (and all of her Senate colleagues) voted for it is simple: It helped keep U.S. hospitals open and operating during a worldwide emergency.

“This is no scandal,” Joseph Antos, a scholar in health care at the conservative American Enterprise Institute, explained in a recent PolitiFact fact-check. “The 20 percent was added by Congress because hospitals have lost revenue from routine care and elective surgeries that they can’t provide during this crisis, and because the cost of providing even routine services to COVID patients has jumped.”

In other words, no one is getting rich by misclassifying COVID-19 deaths.

It’s also fair to say that fewer than 185,000 Americans have died “singularly,” as Ernst put it, from COVID-19. According to a recent update by the Centers for Disease Control and Prevention, 94 percent of patients whose primary cause of death was listed as COVID-19 were also judged to have comorbidities — secondary conditions like diabetes that often exacerbate the virus’s effects. For the remaining 6 percent, COVID-19 was the only cause listed in conjunction with their deaths.

On Sunday, President Trump retweeted a QAnon backer who falsely claimed this meant that only 6 percent of reported COVID-19 deaths — that is, 10,000 or so — were actually caused by the virus. Perhaps this “report” is what Ernst was referring to when she agreed Monday with an audience member who theorized that COVID-19 deaths had been overcounted. “I heard the same thing on the news,” she said.

Despite all the innuendo, there’s nothing unusual about the way the government is counting coronavirus deaths, as we have previously explained. In any crisis — whether it’s a pandemic or a hurricane — people with preexisting conditions will die. The standard for attributing such deaths to the pandemic is to determine whether those people would have died when they did if the current crisis had never happened.

When it comes to the coronavirus, the data is clear: COVID-19 is much more likely to kill you if your system has already been compromised by some other ailment, such as asthma, HIV, diabetes mellitus, chronic lung disease or cardiovascular disease. But that doesn’t mean patients with those health problems would have died this week (or last week, or next month) no matter what. The vast majority of them probably wouldn’t have. COVID-19 was the cause of death — the disease that killed them now, and not later.

Feverishly creating a baseless fiction from two threads of unrelated information — the additional Medicare payments and the CDC update about comorbidities — is a classic conspiracy-theorist move. But that doesn’t make it true.

“The point that the CDC was trying to make was that a certain percentage of [deaths] had nothing else but COVID,” Fauci continued. “That does not mean that someone who has hypertension or diabetes who dies of COVID didn’t die of COVID-19. They did.”

In reality, it’s more likely that the U.S. is undercounting rather than overcounting COVID-19 deaths. According to a recent New York Times analysis of CDC estimates, at least 200,000 more people than usual died in the U.S. between March and early August — meaning that the official COVID-19 death count, which hit 140,000 over the same period, is probably too low.

In the Hawkeye State, COVID-19 had killed at least 1,125 as of Wednesday afternoon. Over the past week, the state has reported an average of 1,177 cases per day, an increase of 124 percent from the average two weeks earlier. Its positive testing rate has risen from 10 percent to 18.5 percent since then.

So while Republican lawmakers such as Ernst seek to downplay the lethality of the virus, Theresa Greenfield, Iowa’s Democratic Senate candidate, seized on her opponent’s baseless claim to underscore the gravity of the situation in one of the only states in America where the pandemic is getting worse.

“It’s appalling for you to say you’re ‘so skeptical’ of the toll this pandemic has on our families and communities across Iowa,” Greenfield tweeted Tuesday, addressing the senator. “We need leaders who will take this seriously.”