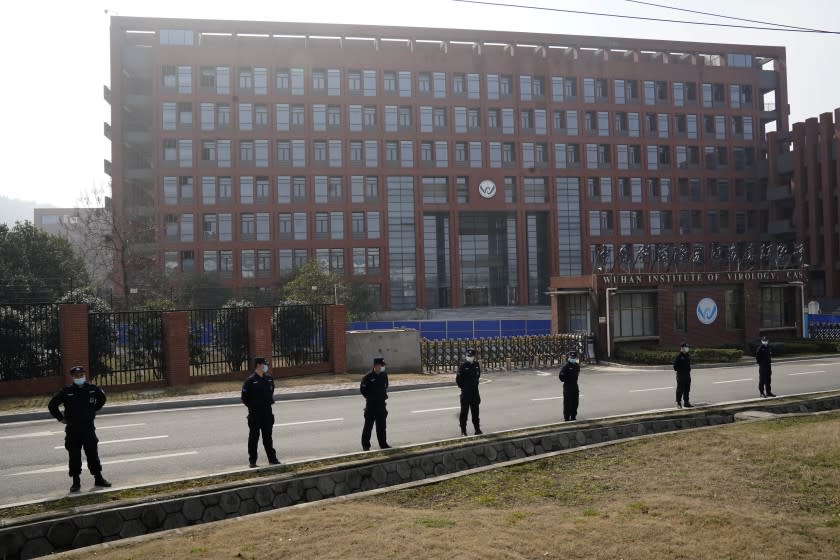 Security personnel gather near the entrance to the Wuhan Institute of Virology during a visit by a team from the World Health Organization in February 2021. (Ng Han Guan / Associated Press)

Eighteen scientists from some of the world’s most prestigious research institutions are urging their colleagues to dig deeper into the origins of the coronavirus responsible for the global pandemic.

In a letter published Thursday in the journal Science, they argue that there is not yet enough evidence to rule out the possibility that the SARS-CoV-2 virus escaped from a lab in China, and they call for a “proper investigation” into the matter.

“We believe this question deserves a fair and thorough science-based investigation, and that any subsequent judgment should be made on the data available,” said Dr. David Relman, professor of microbiology and immunology at Stanford University who helped pen the letter.

The brief letter was prompted in part by the March 30 publication of a report commissioned by the World Health Organization that sought to discover the origin of the virus that has resulted in the deaths of more than 3.3 million people across the globe.

The authors of that report, which is credited to both the WHO and China, ranked each of four possible scenarios on a scale from “extremely unlikely” to “very likely.”

After considering information, data and samples presented by the Chinese members of the team, the authors concluded the likelihood that the virus jumped from a source animal to an intermediary species and then to humans was “likely to very likely,” while an introduction due to an accidental laboratory leak was deemed “extremely unlikely.”

Other potential pathways the investigators considered were a direct jump from animal to human without an intermediate host (“possible to likely”) and transmission from the surface of frozen food products (“possible”).

But Relman and his co-authors said their colleagues who worked on the WHO investigation did not have access to enough information to draw these conclusions.

“We’re reasonable scientists with expertise in relevant areas,” Relman said, “and we don’t see the data that says this must be of natural origin.”

Ravindra Gupta, a professor of clinical microbiology at the University of Cambridge who signed the letter, said he would like to review lab notes from scientists working at the Wuhan Institute of Virology, a research center where coronaviruses are studied. He’d also like to see a list of viruses that have been used at the institute over a five-year period.

The WHO report documents a meeting between its investigators and several members of the institute, including lab director Yuan Zhiming, who gave the joint team a tour of the facility.

At the meeting, representatives of WIV refuted the possibility that the coronavirus that causes COVID-19 could have leaked from the lab, noting that none of the three SARS-like viruses cultured in the laboratory are closely related to SARS-CoV-2.

They also pointed out that blood samples obtained from workers and students in a research group led by Shi Zhengli, a WIV virologist who studies SARS-like coronaviruses that originate in bats, contained no SARS-CoV-2 antibodies, which would indicate a current or past infection.

But Relman said that, as a scientist, he needed more than this thirdhand account to rule out the chance of an accidental laboratory leak. (He and his colleagues did not suggest any potential leak was intentional.)

“Show us the test you used: What was the method? What were the results and the names of the people tested? Did you test a control population?” Relman said. “On all accounts, it was not an adequate, detailed kind of presentation of data that would allow an outside scientist to arrive at an independent conclusion.”

Tedros Adhanom Ghebreyesus, the director general of the WHO, expressed a similar opinion when the report was first released.

“Although the team has concluded that a laboratory leak is the least likely hypothesis, this requires further investigation, potentially with additional missions involving specialist experts, which I am ready to deploy,” he said in an address to WHO member states on March 30. “Let me say clearly that, as far as WHO is concerned, all hypotheses remain on the table.”

Members of the WHO-China joint study team discuss their investigation into the origins of the SARS-CoV-2 virus at a Feb. 9 news conference in Wuhan. (Ng Han Guan / Associated Press)

Michael Worobey, who studies viruses at the University of Arizona to understand the origin, emergence and control of pandemics, also signed the letter. Since the start of the pandemic, he had entertained two possibilities for how it might have begun — either as an escape from a lab or natural transmission from animal to human.

“There just hasn’t been enough definitive evidence either way,” he said, “so both of those remain on the table for me.”

In his own lab, Worobey works with a grad student who collects viruses from bats in the wild, and he’s thought a lot about how this research could create an ecological avenue to introduce a new pathogen to humans.

“As someone who does this, I’m very aware of the opening that creates for new viruses to get close to humans, and so I think that’s another reason I take this seriously,” he said. “I’m concerned about it in my own work.”

Other scientists have convincingly shown that SARS-CoV-2 was not a laboratory construct genetically modified to make it more transmissible to humans, Worobey said. But that does not eliminate the possibility that an unmodified virus collected by scientists in the field and brought into a lab could have moved into humans.

“I’ve seen no evidence that I can look at and say, ‘Oh, OK, this certainly refutes the accidental lab origin and makes it virtually 100% certain that it was a natural event,’” he said. “Until we’re at the stage, both possibilities are viable.”

Scientists said there was one piece of conclusive evidence that would indicate the virus had indeed spread to humans through a natural event — the discovery of the wild animals in whom the virus originated.

Akiko Iwasaki, a professor of immunobiology and epidemiology at Yale University, noted that the WHO report mentioned the testing of more than 80,000 wildlife, livestock and poultry samples collected from 31 provinces in China. None of those tests turned up a SARS-CoV-2 antibody or snippet of the virus’ genetic material before or after the SARS-CoV-2 outbreak in China.

“However, it is possible that an animal reservoir was missed and further investigation may reveal such evidence,” said Iwasaki, who also signed the letter.

David Robertson, the head of viral genomics and bioinformatics at the University of Glasgow, was not among the letter’s signatories. He said he didn’t understand the point.

“Nobody is saying that a lab accident isn’t possible — there’s just no evidence for this beyond the Wuhan Institute of Virology being in Wuhan,” he said.

Robertson said viruses naturally migrate from animals to humans all the time, and SARS-CoV-2 could have been one of them.

Although he agreed with the authors of the letter that it was essential to find the origins of SARS-CoV-2 to prepare for the next pandemic, “wasting time investigating labs is a distraction from this,” he said.

Relman doesn’t see it that way.

“If it turns out to be of natural origin, we’ll have a little bit more information about where that natural reservoir is, and how to be more careful around it in the future,” he said. “And if it’s a laboratory, then we’re talking about thinking much more seriously about what kinds of experiments we do and why.”

The authors of the letter noted that in this time of anti-Asian sentiment in some countries, it was Chinese doctors, scientists, journalists and citizens who shared with the world crucial information about the spread of the virus.

“We should show the same determination in promoting a dispassionate, science-based discourse on this difficult but important issue,” they wrote.

Some Republicans say they bungled their struggle in opposition to Biden’s COVID-19 invoice. However they nonetheless have lawsuits.