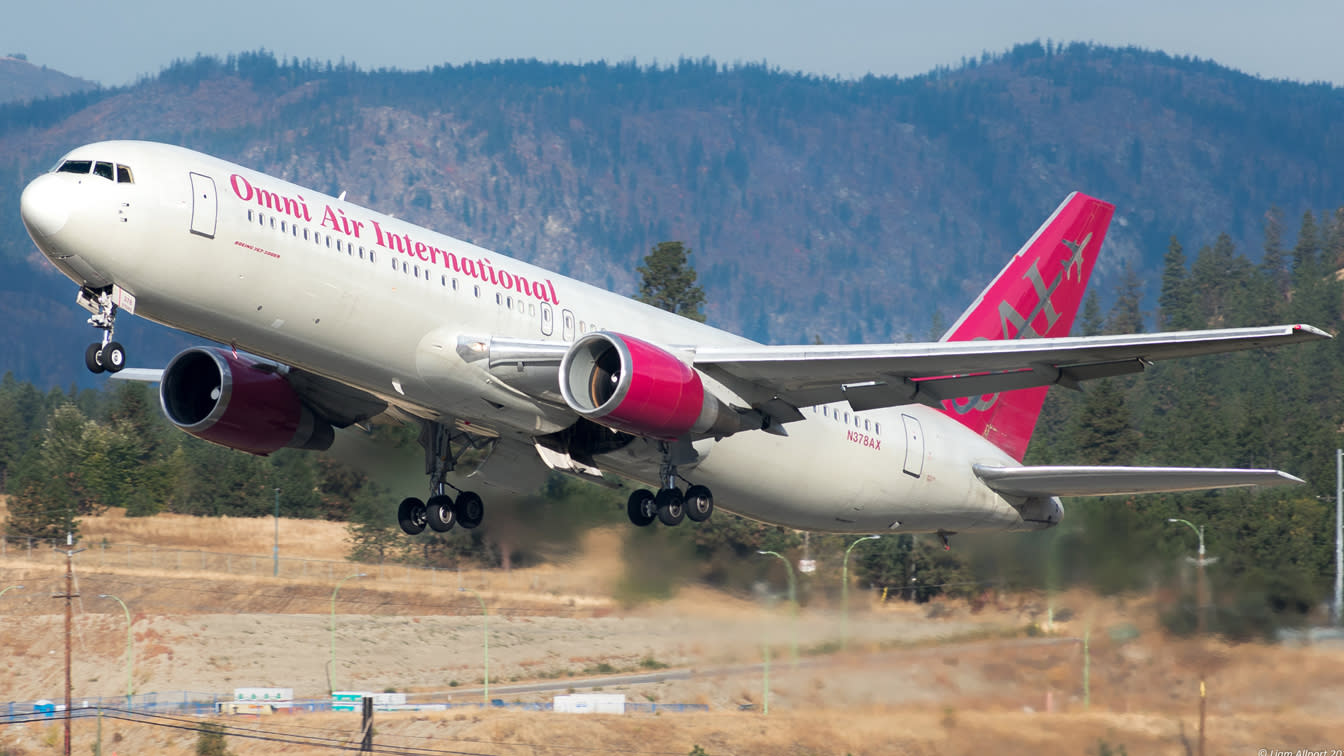 WASHINGTON — Four days before the 2016 presidential election, Republican candidate Donald Trump arrived for a campaign rally at an airplane hangar in Wilmington, Ohio, that belonged to an aviation company called Air Transport Services Group, or ATSG. The company’s chief executive at the time, Joe Hete, was a reliable supporter of the Republican Party.

In his speech, Trump promised to “drain the swamp” and spoke at length about the deleted emails of Hillary Clinton, a favorite topic.

Trump has not been back to Wilmington since then. But his administration has not forgotten about ATSG. Last month, an ATSG-owned charter airline company, Omni Air, secured a $67 million bailout as part of the congressional coronavirus relief package. That came on the heels of a $77.65 million contract with the Department of Defense for “international charter airlift services.”

In addition, Omni Air has charged the federal government exorbitant prices for “high risk” deportation flights for Immigration and Customs Enforcement, the federal agency tasked with addressing the plight of millions who live within the United States without proper documentation. The expense was related to the unwillingness of airlines other than Omni Air to conduct such flights.

The case of Omni Air illustrates what the president’s critics have feared would happen with the CARES Act, the $2 trillion relief package passed by Congress in March.

Passenger airlines were devastated by the coronavirus pandemic, which essentially stopped all global travel for several months. Sympathy for airlines did not run especially high, though, in part because Americans were chronically frustrated by the discomfort of flying amid relentless cost cutting and seat shrinking. And in recent years the major carriers had used their profits for stock buybacks, which benefit investors but not employees.

The language of the coronavirus relief bill affords Treasury Secretary Steven Mnuchin a high degree of discretion in the airline-assistance effort, for which Congress allotted $32 billion. “The amount to be received by each air carrier or contractor is based on its payroll expenses” from 2019, the Treasury Department explains on its website.

There are limited details about how those funding determinations were made. The main conditions stipulated by Congress were that airlines receiving coronavirus relief funds could not engage in share buybacks or lay off employees until the end of the current fiscal year on Sept. 30.

“Treasury has not released any details on the process of how they determined award amounts for the airline companies,” says Sean Moulton, a senior policy analyst with the nonpartisan Project on Government Oversight. (After this article was published, a Treasury spokesperson emailed to say that Moulton’s assertion “has no grounding in fact,” noting that Treasury has, in fact, issued a guidance to airlines.)

So far, 427 aviation companies have received coronavirus-related support from the Treasury. Recipients include well-known giants like Southwest ($3.2 billion) and many much smaller companies like Catalina Flying Boats ($569,176). Of those 427 companies, 407 received less money than Omni Air. And of those that did receive more, most are large passenger carriers. And even some of those, including JetBlue, Alaska Airlines and Spirit, received less per aircraft than Omni, which operates only 15 airplanes (it does not appear that fleet size figured into Treasury’s calculation, with a spokesperson telling Yahoo News that the $67 million award was based on $88 million of salary and benefit expenditures reported by Omni Air for the relevant period).

Among nonpassenger airlines, the largest grant went to Atlas Air, a cargo carrier that like Omni Air works closely with the Pentagon. It received $406 million from the Treasury Department, even though it also appears not to have lost any business during the pandemic.

“The Trump administration’s idea of saving the economy is giving tens of millions in free tax money to a private airline [like Omni] that already profits massively from doing ICE’s deportation dirty work,” said Kyle Herrig, president of the progressive government watchdog group Accountable.US, which has been tracking how the administration spends coronavirus funds.

“Every dollar wasted like this is a dollar not being spent to help small businesses and workers struggling to make ends meet,” Herrig added. “The White House has reached a new low in their disastrous response to this crisis.”

Donald Trump speaks in front of his plane during a campaign event at an Air Transport Services Group hangar in Wilmington, Ohio, on Nov. 4, 2016. (Jabin Botsford/The Washington Post via Getty Images)

“I cannot answer questions related to flights or customers,” Cunningham wrote. He also declined to answer questions about the company’s finances, in particular whether Omni Air was experiencing hardship at the time of its request to the Treasury Department.

No aviation expert contacted by Yahoo News had any insight into why Omni Air did so much better than significantly bigger counterparts that employ many more people.

ATSG donates exclusively to Republican candidates through its political action committee. One of its lobbyists is Kevin DeWine, formerly the head of the Ohio chapter of the GOP and second cousin to Ohio Gov. Mike DeWine, a Republican.

The Trump administration has repeatedly vowed that politics has played no part in either this or any other coronavirus-related funding decision. “Political affiliation has absolutely no bearing on the Payroll Support Program, including applicant eligibility, the amount of assistance provided or use of funds,” a Treasury spokesperson told Yahoo News.

Democrats were infuriated by Mnuchin’s recent refusal to reveal who has benefited from a $600 billion small-business loan program (Mnuchin eventually relented and said he would make the information public). Like the airline bailout, the small-business loan program is part of the CARES Act, a complexly cobbled-together set of grants and loans meant to stimulate spending by consumers and keep businesses from laying workers off.

Democrats worry that Trump and his Republican allies on Capitol Hill have used the coronavirus crisis to justify the transfer of millions of taxpayer dollars to well-connected companies like Omni. Republicans, meanwhile, have argued that distributing money as quickly as possible was their sole objective. What their Democratic opponents see as instances of corruption, Republicans regard as nothing more than the natural outcome of an immense effort to rescue the American economy.

But even though the Omni grant may have adhered to the Treasury’s opaque guidelines, the airline and other coronavirus-bailout recipients have faced scrutiny from Congress, in particular the Democratic-controlled House. “It’s troubling, if not surprising, to see a company behave this way,” Jennifer Ahearn of the watchdog group Citizens for Responsibility and Ethics in Washington told Yahoo News. “This kind of behavior is the reason Congress built oversight into the structure of the CARES Act.”

In addition to disputing suggestions of political influence, the Treasury Department spokesperson explained that the “standard for determining air carrier eligibility was set by Congress on a bipartisan basis, and each applicant’s eligibility is verified by the Department of Transportation before any funds are disbursed.”

A Transportation Department spokesperson said his agency only verified that “carrier applicants” had the proper federal credentials to apply for relief funds, and referred questions back to the Treasury Department. “DOT reported its findings to Treasury, which is responsible for administering the financial assistance provisions of the CARES Act,” the spokesperson told Yahoo News.

Omni Air is hardly a stranger to government funding. The Pentagon contracts the airline to fly uniformed personnel around the world. Omni is also part of the Civil Reserve Air Fleet, whose participants — including major civilian airlines like American and Delta — agree to work with the federal government as needed. During the war in Iraq, Omni was one of several airlines to benefit from the constant movement of people and cargo between the United States and the Middle East.

To this day, Omni Air continues to benefit from Defense Department contracts. Last fall, the Pentagon awarded Omni a contract for $77.7 million, which was to go toward “airlift services.”

The airline’s more controversial operations, however, have involved deportation of immigrants.

In March 2018, Omni flew 110 Kenyan, Somali and South Sudanese immigrants from the United States to Nairobi, Kenya, according to press reports from that time. Later that year, Omni earned the ire of the Cambodian-American community when it participated in the expulsion of 46 Cambodian immigrants from the United States. At the time, the Asian Pacific American Labor Alliance called that “the largest deportation flight of Southeast Asian refugees in United States history.” In August 2019, Omni flew 40 deported Ghanaians back to their native country, on the western coast of Africa.

According to documents obtained by news outlet Quartz, Omni specializes in “special high-risk charter” flights. The passengers on those flights are immigrants who potentially have significant criminal records.

Other airlines have refused to engage in such transports because outrage over Trump’s hard-line immigration policies has resulted in boycotts of companies that contract with ICE.

Because of this effective monopoly, Omni Air has been able to charge astonishingly high prices, according to reporting by Quartz, which obtained internal ICE records to that effect. Last year, a single Omni flight carrying 163 “high risk” deportees back to Asia cost the federal government $1.8 million, Quartz reported. In May, Omni flew 167 Indian immigrants from the United States to Amritsar, a city in the northern region of Punjab.

ICE did not respond to a request for comment about its work with Omni.

News of Omni’s coronavirus relief package outraged Asian-American organizations, some of which had denounced the airline when it deported the Cambodian immigrants in 2018. “It’s shameful that funds are being diverted from frontline communities on the ground to businesses, like Omni Air International, who are profiting from separating families,” said Aarti Kohli, executive director of the Asian Law Caucus.

But with a low public profile and few disclosures about its operations, the “murky” airline — as Omni has been described by the Center for Human Rights at the University of Washington — has suffered no ill effects from participating in one of the most controversial policies of the Trump administration.

To the contrary, Omni has proved a profitable entity for ATSG. When the parent company released its first-quarter earnings in May, it noted that “revenues were up 12 percent, or $41.1 million, to $389.3 million.” The increased revenue was the result “mainly from growth in Omni Air” and another subsidiary, Air Transport International.

Two weeks later, ATSG got more good news when the Treasury Department announced that Omni Air would be awarded its $67 million grant. That means that in the last eight months it has received more than $140 million from Washington, not counting the millions it continues to charge for deportation flights no other airline is apparently willing to conduct.