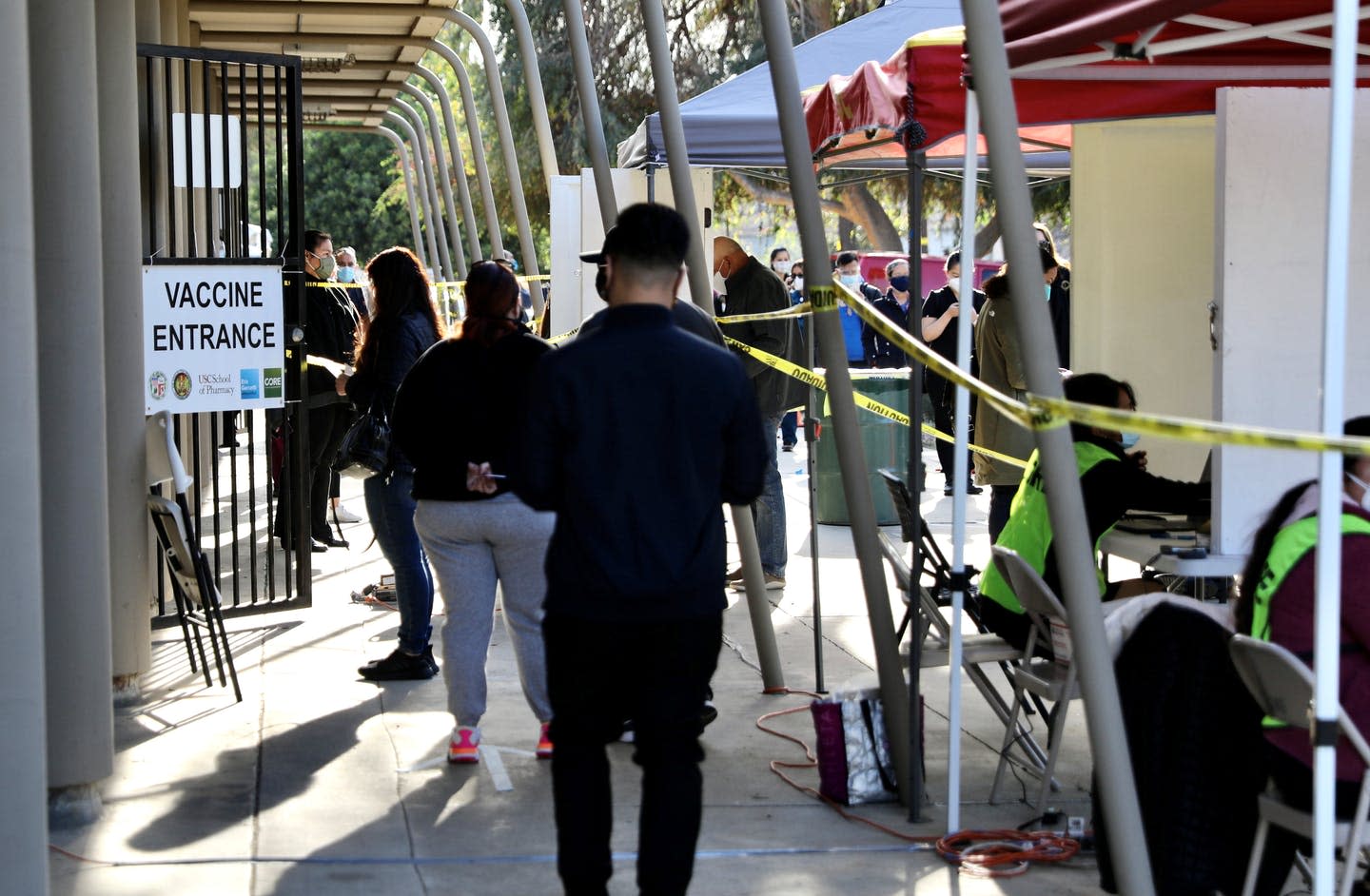 Health care workers wait in line for vaccinations at a site in Los Angeles. Xinhua News Agency via Getty Images

Drugmakers are facing challenges in manufacturing vaccines and building supply chains to meet the demand for COVID-19 vaccines. Pfizer has even lowered production targets. Scarcity of vaccines has prompted calls for a Band-Aid-like strategy to stretch the precarious supply.

To protect as many people as possible from COVID-19, the U.K.‘s medical officers have chosen to prioritize distribution of a first vaccine dose to as many people as possible – by delaying the second doses of the Pfizer/BioNTech COVID vaccine up to 12 weeks from the recommended 3-4. President-elect Biden wants to release all vaccine doses to speed up the vaccination program – but the risk is that vaccine makers won’t be able to replenish the supply to make sure that the second dose is delivered on time.

These decisions have opened up a rift between experts because some support giving a single vaccine dose to as many people as possible, while others want to vaccinate according to the protocol used during the clinical trials. In the U.S. only around a 10th of the 300 million doses promised by January under Operation Warp Speed are actually available. Nevertheless, the Food and Drug Administration has reminded the medical community of the importance of receiving both doses of COVID-19 vaccines in line with the way they were tested in clinical trials. The FDA says there is no data that demonstrates vaccine efficacy if the second dose is delayed.

I’m interested in this debate because I coordinate an international registry of patients with cancer who have been diagnosed with COVID-19. Patients with current or prior cancers are twice as likely to die from COVID-19 than those without cancer. The Centers for Disease Control and Prevention has not included current or surviving cancer patients for inclusion in the first group of COVID-19 vaccine recipents. Altering vaccine doses seems an easy fix to stretch limited supplies and provide vaccines for more vulnerable populations. But is it the right thing to do?

What is a vaccine?

A vaccine gives the human body a glimpse of the disease-causing virus. This preview trains the immune system for exposure to the real virus. Early vaccines, like the oral poliovirus vaccines, contained live but weakened viruses. These provide robust immunity but carry a small risk of illness because even a weakened virus can become active and cause disease in rare cases.

Modern vaccines are safer because they increasingly rely on only parts of the virus, called antigens. In the case of COVID-19, the antigen is the spike protein that enables the SARS-CoV-2 virus to enter cells. Various COVID-19 vaccines under development are based on a synthetic spike protein or its genetic code.

The FDA has so far given emergency use authorization to two mRNA-based COVID-19 vaccines; from Moderna and Pfizer-BioNTech. In the U.K., a DNA vaccine created by AstraZeneca is also authorized. These three vaccines supply the genetic material that encodes the viral spike protein. After injection in the upper arm, the muscle cells read the genetic instructions and use them to make the viral spike protein directly in the body.

The downside to these safer, newer vaccines is that a single dose triggers a less effective immune response than a weakened virus vaccine and often requires repeated vaccinations to get more complete immunity. Many current human vaccines, such as against tetanus, hepatitis B, measles, polio and HPV, require two doses: the first to prime the immune system and the second to boost the immune response.

In clinical trials, the two doses of the Pfizer/BioNTech vaccine were taken three weeks apart. This led to 95% efficacy against the COVID-19 virus. iStock/Getty Images PlusWhat happens after vaccination?

An effective vaccine should produce immunological memory similar to or better than what is acquired by exposure to the natural disease – but without causing the disease. To do so, after the first exposure, from a vaccine or a natural infection, a class of white blood cells called the naïve B cells produce antibodies as the first line of defense against infection.

After the first exposure, some B cells and another type of white blood cell called T cells become “memory” cells that remember the antigen – in this case the spike protein. On second and subsequent booster exposures, these memory cells quickly reactivate to produce more potent antibodies that are able to recognize and bind to the target virus tightly. The antibodies produced by memory cells after the booster dose rise rapidly at tens to hundreds-fold higher protective levels and persist longer.

Why is the timing of the second dose important?

Both mRNA vaccines, even after the first dose, offer protection well above the 50% minimum threshold set for emergency use authorization criteria for COVID-19 vaccines based on the clinical trials. But the efficacy of these vaccines was tested in a two-dose regimen.

In clinical trials the volunteers received two doses of the vaccine 3-4 weeks apart. Will immunity be complete if the second dose is delayed? Jose A. Bernat Bacete/Moment/Getty Images

During Pfizer-BioNTech’s vaccine trial, one vaccinated participant and nine who received a placebo developed a severe case of COVID-19 after the first dose. This suggests that participants developed partial protection as early as 12 days after the first dose. However, all vaccine recipients eventually received their second dose just nine days later, so the data does not exist for how long the protection from the single dose would have lasted.

Similarly, for Moderna’s vaccine trial, there appeared to be some protection against COVID-19 following one dose; but the limited data does not provide sufficient information about longer-term protection beyond 28 days after the single dose.

In the absence of supporting evidence, nothing definitive can be concluded about the depth or duration of protection after just a single dose of currently authorized vaccines, or choosing between the studied and longer gaps between doses.

While the efficacy of the mRNA COVID-19 vaccines against symptomatic COVID-19 has exceeded expectations, researchers still do not know how long that protection lasts. In the follow-up of the phase 1 trial of Moderna’s vaccine during the 119 days after the first dose, the antibodies declined in all participants and the neutralizing antibodies – which not only bind the virus but also block infection – fell 50% to 75% in the people older than 56.

What can happen if vaccination is incomplete?

Viruses naturally mutate because of copying errors in their genetic code as they multiply in the host’s body, or due to swapping of genetic codes between different viruses co-infecting the same host.

But they also evolve to evade the immunity of the host, specially if competing against weak but sustained immune response. SARS-CoV-2 can already lie low in infected individuals, and approximately 40% to 45% of those infected display no symptoms at all. In an immunocompromised patient – using therapies to fight autoimmune disease or cancer – the virus has been found to be present for up to 154 days. In such situations there are increased odds that a virus variant can emerge that can escape the immune response and spread fast. Indeed, it is suspected that the new highly infectious U.K. variant, which is also spreading in the U.S., could have originated in a chronically infected individual.

Although evolution of vaccine resistance is considered very rare because of effective and rigorously developed vaccines, mathematical modeling suggests that a resistant virus can readily arise if immune response is too weak to destroy all the viruses in the host.

Rushed and ineffective vaccines can produce antibodies that fail to recognize and bind viruses poorly, which can do more harm than good.

Changing the dosing to overcome supply shortages is a contentious and ongoing debate. However, making wrong decisions without adequate scientific evidence could be counterproductive.

This article is republished from The Conversation, a nonprofit news site dedicated to sharing ideas from academic experts. It was written by: Sanjay Mishra, Vanderbilt University.

How Love Blossomed in Times of Coronavirus Pandemic