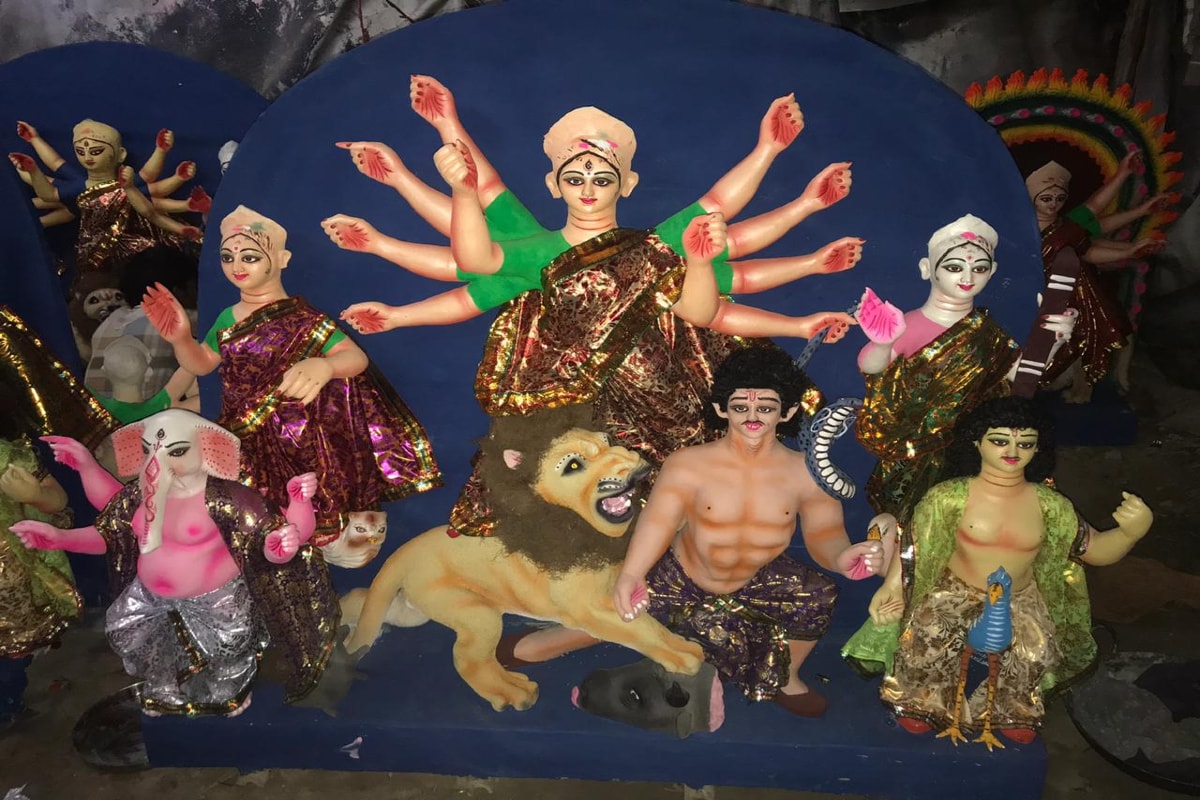 The Hindu deity Vishwakarma, known as the divine architect, is the patron god of all artisans, architects, industrial, and sundry blue-collar workers in India. The deity is said to have fashioned all the best weapons for other gods and goddesses of the Hindu pantheon, often in the nick of time. But inside a damp artist’s studio in Delhi carrying the same name as the deity’s, the coronavirus pandemic has brought work to a standstill.

The sweet fragrance of jasmine blossoms seeps through the breeze, heralding the five-day Hindu festival of Durga Puja next week. But for idol makers in the Capital, the year has brought nothing but bitterness.

While the ban on large-scale gatherings has been relaxed for Durga Puja pandals and Ramleela celebrations, the Delhi government has issued strict guidelines for organisers to cut down on excesses. This means smaller pandals, a cap on the number of people in enclosed spaces, and shorter or no idols.

“Most puja pandals this year want 4-5 feet idols because they want to keep it a low-key affair,” said Chittaranjan Park-based idol maker Govinda Nath. The third-generation sculptor and owner of ‘Vishwakarma Shilpayan’ says coronavirus has dealt a huge blow to him and others in his profession.

What is usually a bustling time for idol makers has turned into a grim reminder of the economic impact of the pandemic, especially on seasonal artisans like Nath whose sole income depends on the annual Hindu idol-worship festivals.

“We get requests for about 40-50 idols every year. Some of them are as tall as 30 feet,” Nath says. But this year, demand has been bleak. He has just managed to sell nine idols and is hoping to deliver another by the end of the week.

“Many committees were either not given permission or are themselves resisting celebrations due to the strict restrictions,” Nath says, adding while it was good that the government was concerned about controlling Covid-19 spread, it also needed to ensure the livelihoods of artisans.

“The government in West Bengal has also laid down restrictions. But pujas are still happening. It’s an election year and the government has to keep everyone happy,” Nath says. “But since Bengalis are not such a big population here and there are no elections coming, the Delhi government does not care.”

The 47-year-old artisan’s hands are nevertheless full due to the absence of his workers. Studios like Nath’s usually employ 10-15 migrant artisans from Bengal and other states ahead of the festive season who stay till the end of Diwali (Kali Puja) before finishing off their annual quota of work. This year, due to the coronavirus lockdown and lack of demand, many of the artisans have been forced to stay back in Bengal.

31-year-old Swapan from Hooghly district usually travels to Delhi during Puja to work as a contractual worker for Delhi-based artisans like Nath. “I called my employer about work but he said he wouldn’t be able to pay me as there was no demand,” Swapan tells News18.

The father of two says he has reached the end of his savings and is having to rely on odd-jobs to make ends meet.

It isn’t just low demand keeping migrants at home. As per a statement given by the idol-makers’ body Mritshilpo Sanskriti Samiti (KMSS) to PTI, a majority of workers were also scared to migrate to other states again, fearing coronavirus or another lockdown.

Back in Delhi, the discontent of idol-makers is not just limited to Covid-19 restrictions. In August last year, the Delhi Pollution Control Committee (DPCC) had issued a 5-ft cap on idols and implemented the rule to immerse these idols in designated pits or makeshift ponds instead of the Yamuna. While the cap was later lifted, city-based idol-maker Arabinda Das from Rani Garden feels the National Green Tribunal’s ban on idol immersions in the Yamuna has sparked concerns about tall idols.

“Not everyone has that much space to bury idols in their backyards. So they want shorter idols,” Das said. “Shorter idols mean lower prices,” he adds.

But unlike Nath who caters mostly to Delhi-based pandals, Das has managed to mitigate some losses by taking up requests from Noida and Gurugram-based pandals instead. “The regulations in these places are much more relaxed so I have tried to focus on these Pujas this year instead,” he says.

Meanwhile, Puja committees and organisers across the city have promised to adhere to the government’s rules. Pandals in each area will be allowed to operate only after the Deputy Commissioner of Police (DCP) or the District Magistrate gives the required approval.

Organisers have been asked to submit video evidence to authorities to prove that the pandal or festivities are not flouting Covid-19 regulations.

Don't Miss it Folks With ‘O’ Blood Group Might Be Much less Weak to Covid-19 An infection, New Research Suggests
Up Next London will return into coronavirus lockdown from midnight Friday, with indoor family mixing banned