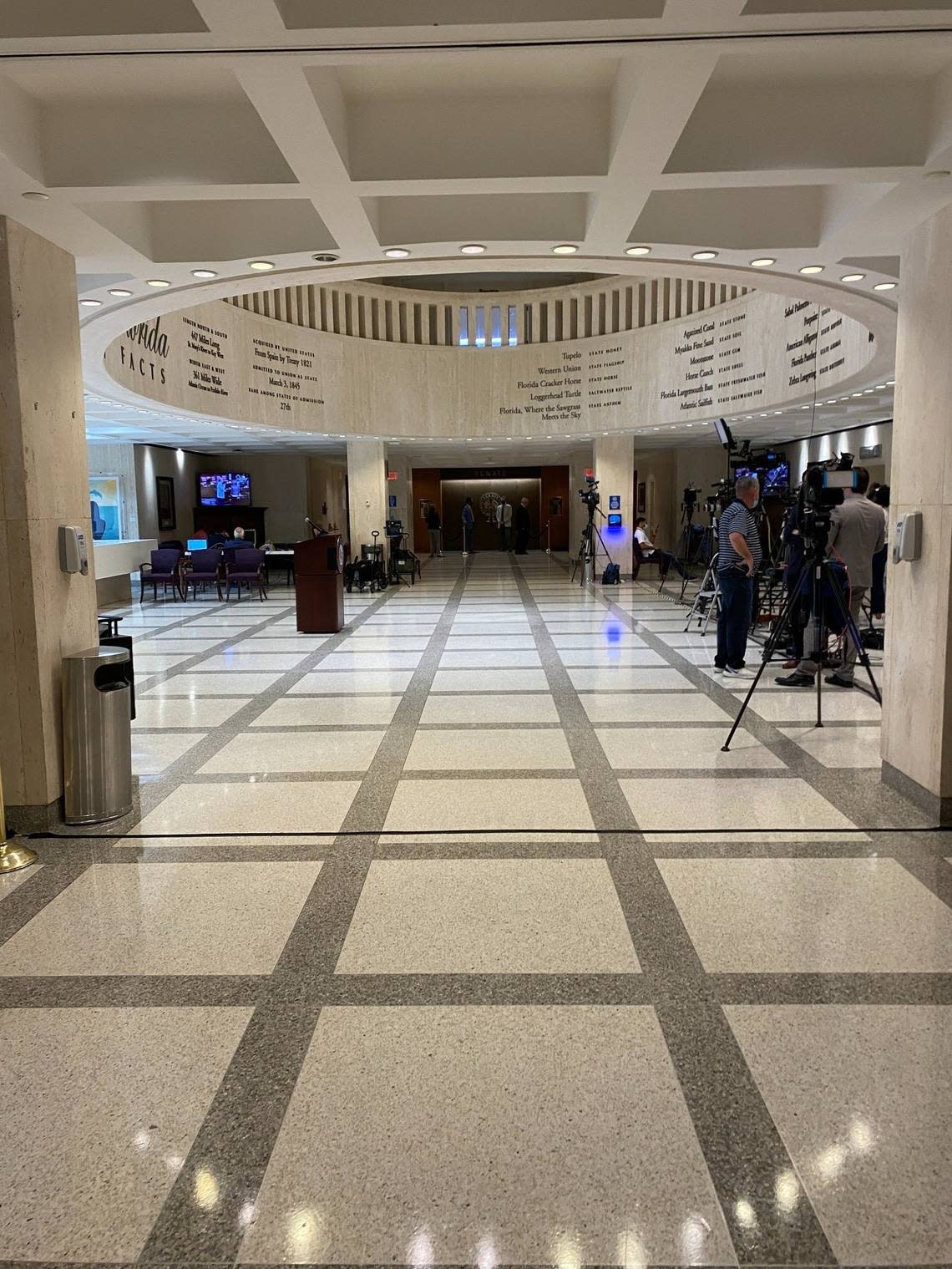 It’s Monday, May 3, and it’s over. The 2021 legislative session is behind us, and you’re not going to find too many denizens of the Florida Capitol who are going to suggest that’s a bad thing. Here’s what you need to know:

It was a session like no other. The public was banned from most of the Capitol to prevent the session from becoming a COVID-19 super-spreader. Staff, legislators, and the media were allowed inside, but only if they agreed to undergo weekly coronavirus tests. There were few lobbyists in the building even on the scramble of the final day, and the real public played a fraction of the role it has in a normal year.

Federal lubricant: Add to the mix $10 billion in federal stimulus money and $13 billion in COVID education relief funds, and you have irony. Money from the Joe Biden administration provided an unprecedented stream of revenue to loosen up other state funds to be used by Florida’s GOP leaders to deliver hometown projects — in exchange for votes from both parties on nearly all their controversial issues.

WHAT WE’RE TALKING ABOUT

Small successes for Dems: There were some small Democratic victories — such as the police reform bill that set minimum statewide use-of-force standards for Florida law enforcement officers and the repeal of three toll roads approved by legislators two years ago on a dubious construction plan. And House Democrats were so pleased with the record $101.5 billion spending plan they unanimously voted for the budget and even gave it a standing ovation.

Big wins for DeSantis: But it was Gov. Ron DeSantis who walked away the biggest victor from his third session. He underscored his priorities by holding press conferences calling for action on a host of culture war issues: penalizing social media companies that remove users, restricting mail-in voting, prohibiting so-called “vaccine passports,” and passing “anti-riot” legislation.

Legislators delivered it all, plus a ban on transgender girls competing in school athletics.

Campaign starts now: The agenda leaves DeSantis well-positioned to announce his re-election bid soon for 2022 and continue to toy with the idea of running for president in 2024. We expect some news after the May 17 special session on gambling.

Former Gov. Charlie Crist announces that he is running for Congress, Oct. 20, 2015, in St. Petersburg.

Crist to launch first: Democratic Congressman and former Gov. Charlie Crist is expected to make his announcement Tuesday to challenge DeSantis for governor next year. Congresswoman Val Demings of Orlando is also expected to announce she is running soon. And Agriculture Commissioner Nikki Fried is also positioning herself for the Democratic primary.

Growing list for Hastings seat: The race to replace the late Congressman Alcee Hastings continues to draw a crowd. Last week West Palm Beach state Rep. Omari Hardy became the fifth politician to announce he plans to run for the seat. DeSantis has yet to announce a special election for the seat as speculation mounts that he intends to replace any open seats with Republicans. One candidate for the race has filed a lawsuit demanding he stop the delay.

Census surprise: The district, which spans both Broward and Palm Beach counties, however, could get some creative reconstruction in redistricting next year, especially with the news that Florida will only get one — not two — additional seats in Congress as expected.

Fixes needed: There already are signs that some of the bills legislators fast-tracked will face a stream of lawsuits, and even Republicans are conceded they will need some fixes next year. Take the voting reforms passed by lawmakers, for example. The president of the Florida Supervisors of Elections said the measure will make it harder to request and return vote-by-mail ballots and Okaloosa County Elections Supervisor Paul Lux said he looks “forward to continuing to work with the Legislature next session to make needed improvements before the mid-term elections.”

NPA candidate limits: Also on Friday, legislators agreed to address the only example of voter fraud they had last year — in which Republican Frank Artiles is accused of recruiting a no-party candidate to siphon votes from the Democratic incumbent in Senate District 37. After resisting the change all session, legislative leaders came to a last-minute agreement to require a person be registered to vote without a party affiliation for a year before running for office as an NPA candidate.

On ballot – from Sweden: Intriguing developments emerged in the case last week of the Central Florida woman who ran as an independent for the state Senate seat. The Miami Herald collaborated with Swedish daily newspaper Dagens Nyheter and found Jestine Iannotti in a Stockholm suburb. She had applied for residency in Sweden before filing to run in the November 2020 election.

NCAA tangle: Legislators corrected one big mistake on the final day of session. In their haste to revive and pass the transgender bill, which had been declared dead last week, they also attempted to fend off a threat from the NCAA to pull its events from Florida. They offered to delay a bill set to take effect in July that allows college athletes to get paid for things like autographs, commercials and social media posts. But backlash from Florida’s top coaches and star quarterbacks was immediate, so legislators scrambled to use another bill to restore the effective date of the law.

Florida lawmakers continued Wednesday to narrow an effort to overturn a decision by Key West voters last year that placed restrictions on cruise ships docking at the city’s port.

Cruise conflict: Early in the week, it appeared that the move to preempt Key West’s voter-approved referedum was in trouble after the Miami Herald reported that Mark Walsh, the business developer who operates the Key West pier which gets most of the city’s cruise ship traffic, donated nearly $1 million to DeSantis’ political committee through 11 of his companies days before the legislative session began.

But by the next day, the sponsors revived the preemption bill, rewrote the section they thought could be declared unconstitutional, and sent it to the governor.

Vaccine proof: Meanwhile, the governor’s ban on businesses, schools and government from requiring people to show proof of vaccination is already running into conflicts. Two days before the legislators passed the bill banning the so-called “vaccine passports,” the CDC told the cruise ship industry they can speed up the timeline for cruises to restart — but only if ships can show most passengers and crew are vaccinated against COVID-19.

Vaccines incentives: Legislators made no attempt to focus on how to close the vaccine gap so that effort again will be left to local governments. Miami Beach Mayor Dan Gelber noted the low demand for vaccines at the recently opened state site across from his city hall and he suggested that businesses offer deals to those who show proof of vaccination.

Vaccine conspiracies: Legislators remained silent when news broke last week that Centner Academy, a private school in Miami, sent an email warning staff not to take the coronavirus vaccine and thend spread misinformation about the drugs’ safety. Democratic state Sen. Jason Pizzo proposed an amendment Thursday that would outlaw companies, governments and educational institutions from preventing people from getting vaccines. The measure failed on a tie vote.

Voucher expansion: Despite the uneven record of some private schools, and the state’s spotty oversight of them, legislators passed a sweeping $200 million school-choice proposal that would expand the state’s voucher programs that help families pay for private schooling. If DeSantis signs it into law, the legislation would pave the way for about 61,000 new students to qualify for taxpayer-funded vouchers, a push that Democrats fought.

Book ended Farmer’s rein: Long-simmering intra-party conflict within the Senate Demcratic caucus same to a head last week when they voted to replace Senate Minority Leader Gary Farmer of Lighthouse Point with Sen. Lauren Book of Plantation days before the end of the legislative session. Frustration with Farmer had been mounting since he failed to unite his caucus on several bills this year. Democrats make up just 16 of the 40 senators, making them powerless to stop the vast majority of Republican bills.

Worforce reforms: Lawmakers also passed an overhaul of Florida’s workforce system, giving it more flexibility to respond to the labor needs of an ever-changing state. Oversight is shifted to the governor’s office..

Auto insurance remake: Florida motorists are one step closer to no longer having “no-fault” auto insurance, after lawmakers Friday approved ditching the decades-old system and its requirement of carrying personal-injury protection coverage.

Jayme O’Connell, with her daughter Ivy, who is in the NICA program, at a legislative committee meeting in Tallahassee on Monday, said she is grateful for NICA but that it needs to be fixed.

Gun preemption expands: Florida law already restricts municipalities from enacting their own gun laws, but legislators passed new provisions to add “unwritten” policies to the prohibition and to discourage local governments from changing their policies in the middle of a lawsuit.

Bright Futures cuts: Legislators backed off from massive cuts to the state’s university system but agreed to cut a $600 stipend to Bright Futures’ top-level recipients. They also passed legislation to shield private and public universities from COVID-19-related lawsuits seeking tuition and fee reimbursements as a result of pandemic-related school disruption.

Data privacy dies: What might have been a landmark proposal, a bill to require companies that collect and sell the electronic data of their clients to allow customers to opt out died on the final day of the session.

Legal notice compromise: After weeks of negotiations between Republican lawmakers and lobbyists for the state’s newspaper industry, legislators backed off measures that would have stripped many Florida news organizations of a key source of advertising revenue and ended with a compromise that will change the way governments publish legally required public notices.

Finder’s not keepers: In the age of SpaceX and its reusable spacecraft and parts, legislators also passed a bill to make it a crime to keep any space debris that people may find.

Runcie resigns: Hours after releasing a video statement saying he will be vindicated following his arrest and grand jury indictment earlier this month, Broward County Public Schools Superintendent Robert Runcie told the School Board that he would resign. He said that it was not specifically the felony perjury charge that led him to resign, but rather the continued blame he’s received for the events leading up to the mass shooting at Marjory Stoneman Douglas High School. He has entered a written plea of not guilty to the charge.

We’ll be taking a break until after the May 17 special session. Stay well! Miami Herald Capitol Bureau Chief Mary Ellen Klas curated this newsletter. If you have any ideas or suggestions, please drop me a note at meklas@miamiherald.com.

Special offer: The Miami Herald needs your support if we are to continue to supply the meaningful local journalism you count on during these unprecedented times. We’ve lowered our monthly rate for unlimited digital access to $.99 a month. Check it out!

Know someone who’d like to get this? Send this to a friend to receive our weekly newsletter on politics and policy.