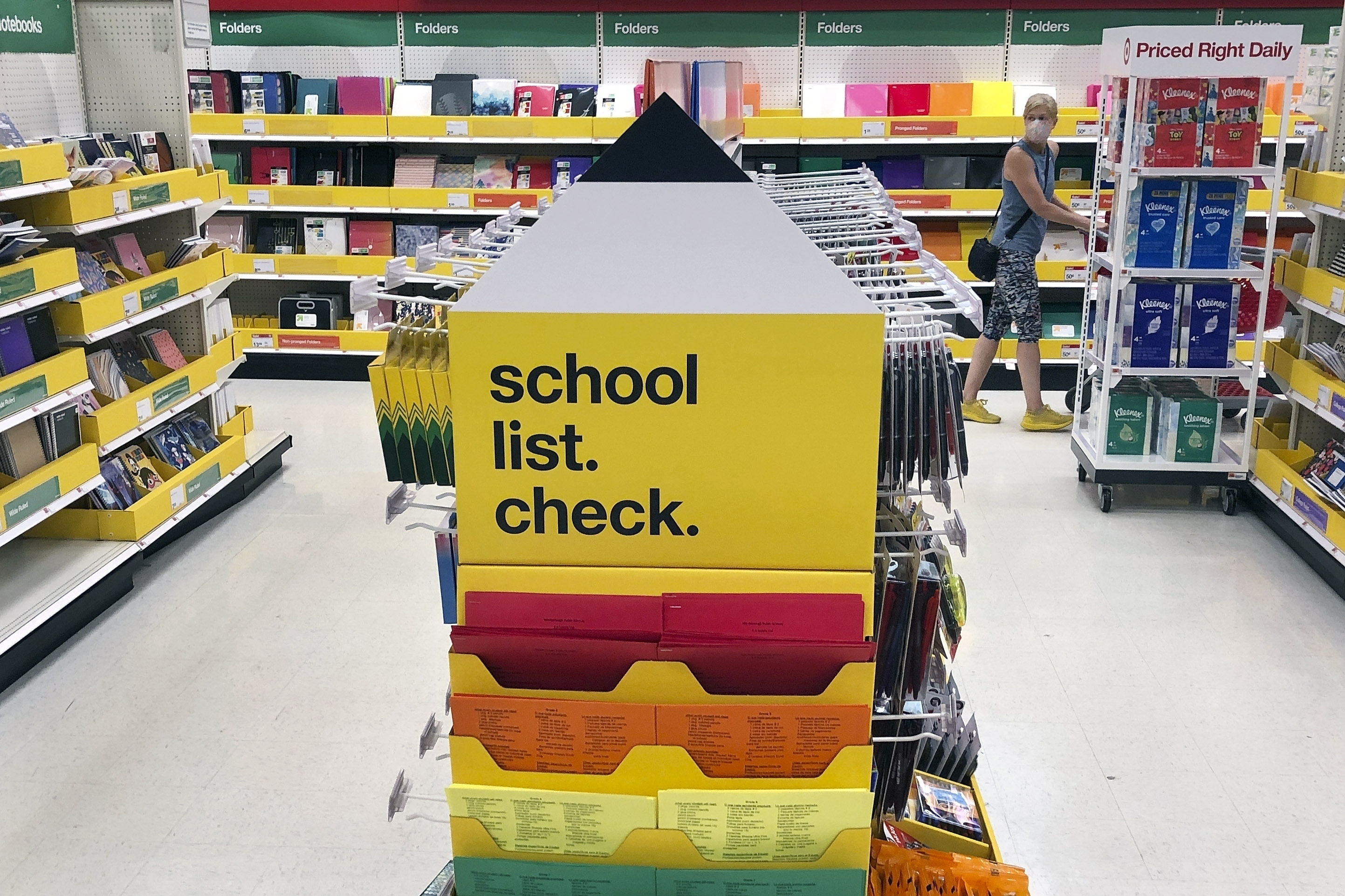 NEW YORK (AP) — For Michelle Lynn England, back-to-school shopping always meant heading to Target and the local mall with her two girls and dropping about $500 on each of them for trendy outfits.

The Charlotte, North Carolina, woman cut her spending on clothing in half for her 10-year-old and 14-year-old and instead spent more on masks and other supplies as a surge in coronavirus cases forced her school district to extend online learning through the fall.

“The kids always looked forward to getting something new,” said England, who spent $500 in total this time around. “It didn’t make any sense to buy any extra clothes that won’t be worn.”

As the pandemic drags into the new school year, it is wreaking havoc on reopening plans and the back-to-school shopping season, the second most important period for retailers behind the holidays.

Parents are buying less dressy clothing and more basics for their kids, while stepping up purchases of masks and other protective equipment as well as electronics. They’re also holding back on spending amid uncertainty over what the school year will look like. The back-to-school season typically kicks off in mid-July and peaks in mid-August. This year, experts predict the peak will hit in late August and spill into most of September.

“We are definitely seeing a delay,” said Jill Renslow, senior vice president of the Bloomington, Minnesota-based Mall of America, which reopened in mid-June with social-distancing protocols. “People just don’t know what they need.”

Renslow said the most popular purchases are electronics like laptops and headphones. For clothing, shoppers are focusing on comfortable items like yoga pants. She’s also seeing increased sales of home decor for kids’ rooms as they spend more time doing online learning.

The National Retail Federation, the nation’s largest retail trade group, is pinning its hopes on parents who splurge on pricey items such as computers and other electronics to help their kids learn from home. The trade group predicts that parents of elementary and high school students will spend a total of $33.9 billion this year. That’s up from $26.2 billion last year and would break the record of $30.3 billion set in 2012.

College students and their families are expected to spend a total of $67.7 billion, up from $54.5 billion last year and potentially breaking the record of $55.3 billion set in 2018, according to the trade group.

But others foresee a weak season for retailers.

Neil Saunders, managing director of research firm GlobalData PLC’s retail division, projects $26.4 billion in spending for elementary and high school, down 6.4% from 2019. Back-to-college spending should fall even more, with sales down 37.8% from last year as many students will be living at home and not buying dorm furnishings, he said.

“It’s going to be a difficult back-to-school season,” Saunders said. “It’s retailers’ first big test. I don’t think the outcome is going to be good at all.”

Another factor depressing sales: Amazon’s Prime Day, which for five years was in mid-July, has been postponed until the fall. Marshal Cohen, chief industry adviser of market research firm The NPD Group, said that the shopping event helped jump-start back-to-school sales.

John Fleming, interim CEO at Warrendale, Pennsylvania-based Rue21, says sales now look like a “COVID map.” Stores in states that have experienced surges in new coronavirus cases report sales declines, while the Northeast, where infections have flattened or declined, has seen sales increases.

As more schools shift to virtual lesson plans, retailers are pivoting too. Walmart Inc. has developed designated areas for teachers and virtual learning tools on its website. The discounter’s Sam’s Club division is offering webcams and more headphones and adding lap desks for kids learning at home. Best Buy, the nation’s largest consumer electronics chain, is adding new services, including a tool called Parent Hub, which provides tips and resources to parents to help with distance learning.

J.C. Penney, which filed for Chapter 11 bankruptcy in May, is marketing room decor aimed at students who aren’t decorating dorm rooms but can decorate their bedrooms instead. Kohl’s, whose message on its website reads, “Heading back, or logging in,” is promoting educational toys and desk accessories as part of its back-to-school campaign.

Andrea Tortora said her sons, ages 14 and 11, have everything they need for hybrid learning in the fall after she loaded up on school supplies last spring. She said she will probably just buy two pairs of shorts, but she’s not in any rush.

“I am not planning any specific shopping trips for back-to-school,” the Peoria, Illinois, woman said. “We have enough.”

How to stay protected from the BA.5 Omicron subvariant of the coronavirus