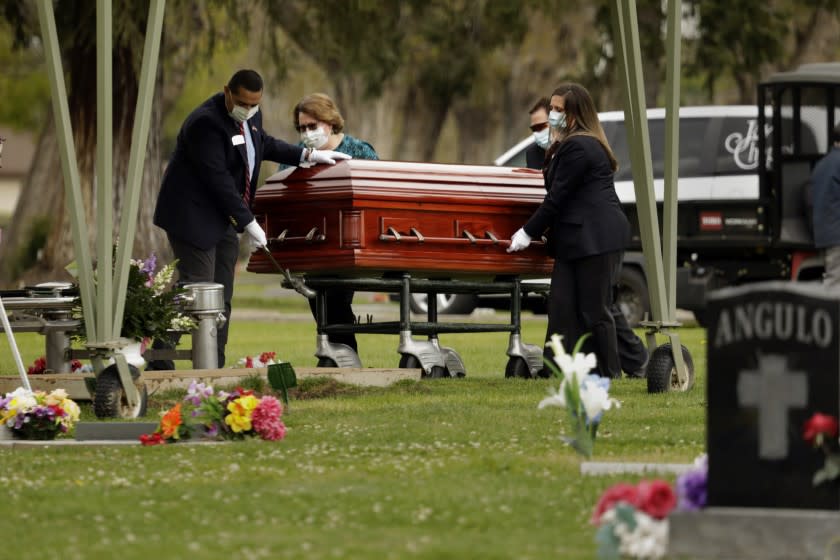 Wanda DeSelle, a victim of COVID-19, is laid to rest in Madera, Calif. A new study says the official count of coronavirus-related deaths in the U.S. may be off by 28%. (Carolyn Cole / Los Angeles Times)

As if the death toll of COVID-19 weren’t bad enough, a new study estimates that the true number of U.S. fatalities linked to the pandemic is up to 28% higher than the official tally.

That means that for every 3.5 known victims of COVID-19, another American lost his or her life as a result of the coronavirus outbreak.

“Official tallies likely undercount deaths due to the virus,” researchers reported Wednesday in JAMA Internal Medicine. The extent of this undercount varies “markedly between states,” they added.

Between March 1 and May 31, the number of COVID-19 deaths reported to the National Center for Health Statistics was 95,235. But there are good reasons to suspect that figure is an undercount, the study authors explained.

The country didn’t have enough coronavirus test kits to make a definitive diagnosis for everyone suspected of having COVID-19, especially in the early days of the pandemic, they wrote. Furthermore, the tests that were available were sometimes wrong, causing people who were actually infected with the coronavirus to be told that they didn’t have it. And some states haven’t compiled their death certificate data as promptly as others.

To get a more reliable count of coronavirus-related deaths, a team led by Yale epidemiologist Daniel Weinberger set out to determine the number of “excess deaths” that occurred in the U.S. in March, April and May.

They started by gathering weekly death counts for each state, starting with January 2015 and ending in January 2020. Then they used that data to project what the weekly death counts would have been through the end of May 2020 if the pandemic hadn’t happened. That gave them a baseline figure of expected deaths for 48 of the 50 states, along with the District of Columbia. (North Carolina and Connecticut were not included because some of their mortality data was missing.)

Next, the researchers tallied the actual number of reported deaths in each state between March 1 and May 30. The difference between the expected deaths and the actual deaths gave them the number of excess deaths.

Actual deaths exceeded the expected deaths in all but seven of the states they analyzed. In other words, 41 states and the District of Columbia all had at least some excess deaths.

In California, for instance, the historical trend suggested the state would have about 65,600 deaths in March, April and May. In reality, there were 72,407 — a difference of just over 6,800 deaths. Yet the state attributed only 4,406 deaths to COVID-19 during that period, suggesting the official count did not capture the true toll of the pandemic in the Golden State.

Looking at the California data week by week, the study authors noted that the excess deaths began to appear several weeks before the state initiated widespread coronavirus testing. That could help explain the shortfall in the official count, they wrote.

The researchers also calculated that for every 100,000 California residents, there were 17.2 excess deaths in the March-to-May period. That put the Golden State well below the nationwide figure of 37.3 excess deaths per 100,000 people.

The seven states that bucked the trend by having fewer deaths than expected were North Dakota, Wyoming, West Virginia, Alaska, South Dakota, Hawaii and Maine.

The longer the pandemic goes on, the smaller the gap between excess deaths and official COVID-19 deaths becomes, the study authors wrote. That’s probably the result of many factors, including more widespread testing.

Not all of the excess deaths are a direct result of coronavirus infection, the researchers wrote. Some people suffered indirectly by staying away from — or being turned away by — overwhelmed hospitals and doctor’s offices, even though they needed care.

Indeed, a report published last week by researchers from the Centers for Disease Control and Prevention found that the number of patients coming to emergency rooms seeking treatment for a heart attack fell by 23% in the 10 weeks after the U.S. declared a national emergency on March 13. ER visits for strokes declined by 20%, and visits by diabetes patients who were in the midst of a life-threatening hyperglycemic crisis dropped by 10%, according to a study in the CDC’s Morbidity and Mortality Weekly Report.

“Even in situations of ample testing, deaths due to viral pathogens, including SARS-CoV-2, can occur indirectly,” Weinberger and his colleagues wrote. “Monitoring excess mortality provides a key tool in evaluating the effects of an ongoing pandemic.”

How dangerous is the second wave of CORONA mutant variety