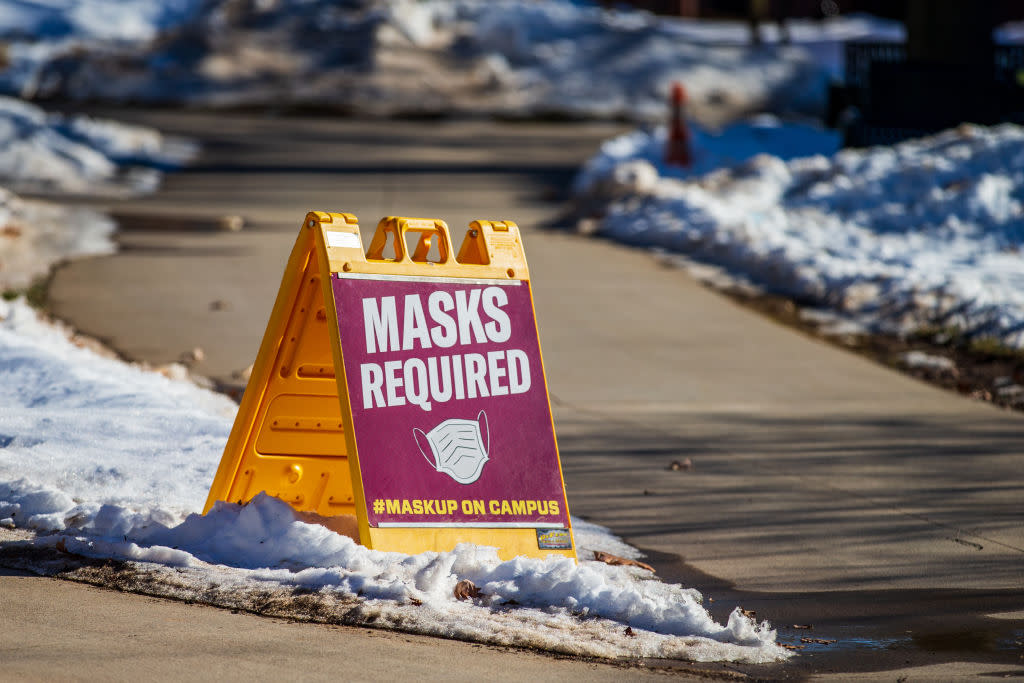 A sign alerting people that masks are required on campus

From the end of 2020 into early 2021, the U.S. was locked on a pathway of continually breaking and re-breaking COVID-19 records. In December, more than 200,000 new infections in a single day were reported for the first time. Only about a month later, the country hit a somber new record: 300,000 diagnoses in a single day.

After months near those dizzyingly high marks, daily case numbers have fallen dramatically. On Feb. 9, there were 92,666 new diagnoses, the third day in a row the tally was below 100,000—which last happened on Dec. 25.

Hospitalization and death counts, while still high, are also falling. About 80,000 people in the U.S. were hospitalized with COVID-19 on Feb. 9, compared to a mid-January average of about 130,000. And while more than 3,000 people died on Feb. 9, seven-day averages of death counts are also far below their January peak.

Those are promising signs, experts say—but the progress could be reversed, given the threats of post-Super Bowl infections and fast-spreading new viral variants.

It’s tempting to attribute lower case counts to COVID-19 vaccines. But while the pace of vaccine rollout has picked up since the campaign’s earliest days, vaccine coverage probably isn’t yet widespread enough to have a strong impact on case counts, says Dr. Eric Topol, founder of the Scripps Research Translational Institute.

About 10% of the U.S. population has received at least one dose of a COVID-19 vaccine. While those individuals are less likely to become sick with COVID-19, which certainly helps slow the virus, experts estimate upward of 70% of the population would need to be immune to COVID-19 to stamp out its spread.

“We’re nowhere near where you need to be for herd immunity, even with the combination of vaccination and the number of people who had the disease,” says Dr. Mark Roberts, director of the Public Health Dynamics lab at the University of Pittsburgh. Each vaccination helps, but it may take months for immunizations to have a dramatic effect on case counts. (Death rates may actually decrease faster than case counts, says Caitlin Rivers, senior scholar at the Johns Hopkins Center for Health Security, because the people most likely to develop severe COVID-19 are first in line for shots.)

Rather, the recent downturn likely represents a return to pre-holiday levels of viral transmission.

As many experts warned, COVID-19 cases surged in the U.S. after the winter holidays, due to the combination of heavier-than-usual travel and indoor gatherings. We may now be coming back down from the crest of that curve, Topol says. Rivers adds that the winter surge may have encouraged some people to be more careful. Some data suggest more people are regularly wearing masks in public now compared to a few months ago, for example.

But some experts fear Super Bowl celebrations may lead to yet another (albeit probably smaller) winter spike in cases. That’s especially worrisome with new, extra-contagious viral variants beginning to spread in the U.S. When one mutated strain took root in the U.K., it led to such a massive surge in infections that the health care system essentially collapsed. Topol fears something similar could happen in the U.S., especially if elected officials ease up on policies like mask mandates and indoor dining bans.

Lower case counts can be a false friend. They suggest the situation is improving, which may prompt authorities to loosen up on precautions, in turn ushering in a new wave of infections and potentially exposing people to fast-spreading new variants.

“Spread begets spread,” Topol says. “It’s the worst possible scenario to take the downturn and, instead of capitalizing on it,” begin re-introducing risky activities. To avoid another surge, Topol says he’d like to see a massive scale-up in the availability and use of at-home rapid tests, which could help identify infected individuals before they expose anyone else. Ideally, he says the government would supply each household with such tests, as well as high-quality masks. The U.S. should also be doing more genomic surveillance to look for case clusters associated with new variants and respond with targeted containment efforts, Topol adds.

Without such tools, though, precautions like masking and social distancing will remain important. The future, Roberts says, will depend on “the combination of the virus and our response to it.”