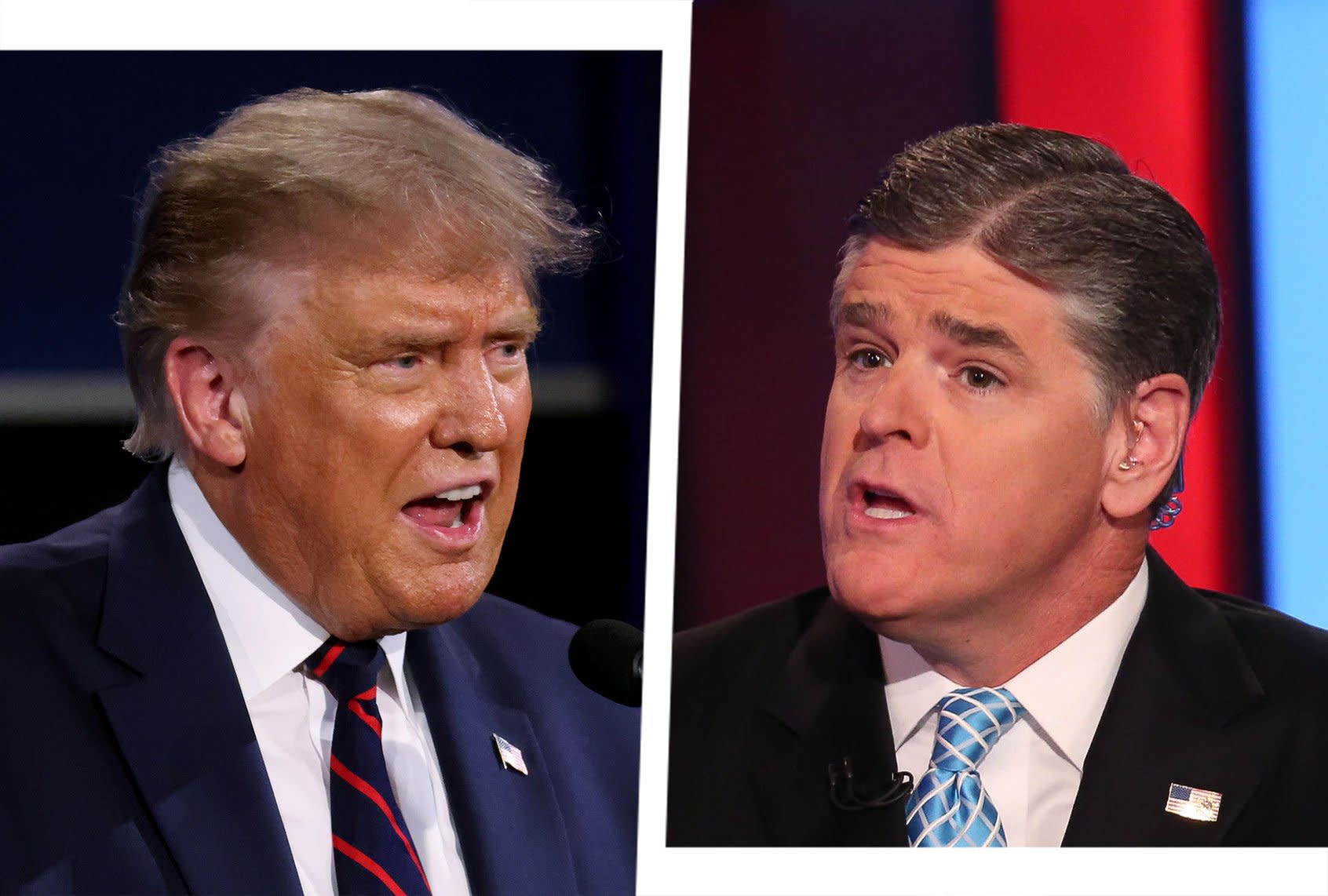 President Donald Trump, who continues to recover from symptoms of COVID-19 in the wake of his recent hospitalization, repeatedly dodged questions about whether he had recently tested positive for the disease during a lengthy Thursday phone interview with Fox News host Sean Hannity.

At one point, the president stopped speaking as he attempted to stifle his cough mid-rant about his former Democratic rival Hillary Clinton. Trump publicly mocked Clinton for contracting pneumonia on the 2016 campaign trail.

“Have you been tested recently?” Hannity asked the president.

“Did you test negative?” Hannity pressed.

“I’ll tell you I took this Regeneron. It’s phenomenal. Eli Lilly has something very comparable, and its phenomenal,” Trump responded, referencing the manufacturer of the experimental antibody cocktail he was given at the White House several hours before being flown to Walter Reed Medical Center.

“It’s a whole new day. If you go back a few months, nobody ever thought about this stuff. We came up with it. I’m going to have it delivered to every hospital. We have sick people with COVID — with the China virus, as we call it,” Trump said, invoking a xenophobic term for the virus which causes the COVID-19 disease. “It actually made me better. I went in. I could have left a day later. I’m telling you, Sean, it was incredible.”

But the president, who was one of the first 10 patients to receive the treatment under a special “compassionate use” agreement, cannot actually have it “delivered to every hospital.” Such a feat would currently be impossible when considering supplies, logistics and economics. It would also interfere with the federal process for clinical trials.

“That’s Regeneron,” Trump reminded the Fox News host, with whom he is known to engage in pillow talk. Regeneron is run by a member of one of the president’s private golf clubs — who donated more than $55,000 to groups supporting Hillary Clinton’s 2016 campaign — and its stock went soaring following a viral Twitter video posted by the president on Wednesday.

In that video, Trump falsely hailed the experimental therapeutic from the drug maker as a “cure” and falsely promised to provide it to hospitalized COVID-19 patients “for free.” The president appeared to not remember the day of the week, referencing his release as having happened “yesterday.” In fact, it was actually two days prior.

Trump also appeared to not recall that he had been given the antibody infusion prior to his hospital trip — not while he was in the hospital, as he claimed. The president may also possibly be mistaking it with at least two other experimental treatments received during his hospitalization: the antiviral Remdesivir and the steroid dexamethasone. The effects of the steroid, in particular, would likely have been felt more immediately than the antibody treatment, one expert told Salon.

“Have you had a test since your diagnosis a week ago?” Hannity repeated.

“Probably, the test will be tomorrow — the actual test,” Trump said, again not answering Hannity’s question. “Because there’s no reason to test all the time. They found very little infection or virus, if any. I don’t know if they found any. I didn’t go into it greatly with the doctors.”

The president also withheld information from Hannity in a phone interview conducted one week prior, when he did not disclose his own positive test. During that interview, Trump also blamed soldiers and law enforcement for infecting his top aide Hope Hicks, citing the uniformed men’s desire to “hug” and “kiss.”

The White House and Trump’s physician have repeatedly refused to answer when the president last had a negative test. At least 34 people who work at or for the White House have tested positive for COVID-19 in the last two weeks, according to an internal administration memo. When Salon reached out this week with questions about other top officials, a White House spokesperson declined to answer and indicated they would no longer reveal that information to the public.

Trump went on to praise the care he had received at Walter Reed, telling Hannity that he believed he was “the most analyzed human being in the world right now.” The president also boasted that his doctors “are amazed at how quickly this went, frankly.”

Trump’s personal physician, Dr. Sean Conley, has been criticized for offering an incomplete picture of the president’s health and repeatedly refusing to disclose key medical information, such as the timeline of the president’s diagnosis and whether lung scans showed signs of pneumonia. In his first briefing from Walter Reed on Saturday, Conley lied about whether the president had received supplemental oxygen the previous day; he apologized the following day.

Later in the Hannity interview, Trump, whose voice sounded raspy, stopped speaking to suppress a cough and clear his throat. That was not the only place in the interview where his voice showed signs of struggle. Earlier this week, Conley released a memo claiming that Trump had “reported no symptoms.”

Fox News announced Friday that the network would host Trump’s his first live video interview following his hospitalization on “Tucker Carlson Tonight.” Dr. Marc Siegel, one of the network’s medical contributors, “will conduct a medical evaluation and interview during the program.”

Don't Miss it Not less than 12,000 mink useless as coronavirus spreads amongst fur farms in Utah and Wisconsin
Up Next Indians are Utilizing Therapeutic Powers of Writing to Deal with Covid-19 Stress