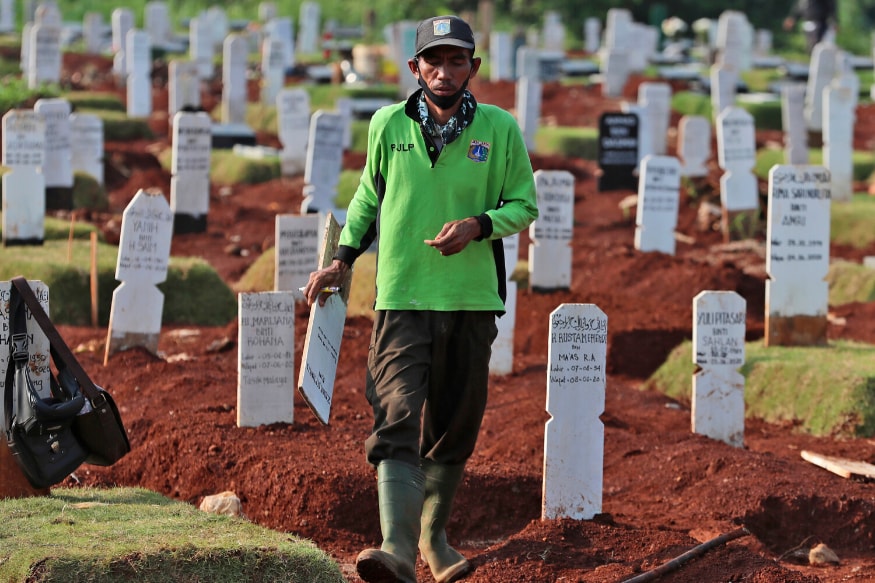 A worker walks among graves at a special cemetery for people who presumably died of COVID-19 at a cemetery in Jakarta, Indonesia Friday, June 12, 2020. As Indonesia’s virus death toll rises, the world’s most populous Muslim country finds itself at odds with protocols put in place by the government to handle the bodies of victims of the pandemic. This has led to increasing incidents of bodies being taken from hospitals, rejection of COVID-19 health and safety procedures, and what some experts say is a lack of communication from the government. (AP Photo/Achmad Ibrahim)

As Indonesia’s virus death toll rises, the world’s most populous Muslim country finds itself at odds with protocols put in place by the government to handle the bodies of victims of the pandemic.

Jakarta, Indonesia: The mob of over 150 people who forcefully took Muhammad Yunus’ cadaver from a hospital in eastern Indonesia thought it was impossible that the 49-year-old Islamic preacher could have died from the coronavirus. He had always washed his hands, worn a mask and followed health protocols issued by the government, according to local residents.

So when he died the day after going to the hospital on Sulawesi island with chest pains and having trouble breathing, his followers were determined to retrieve his body for what they considered a proper Muslim burial. Over 100 people broke into the hospital, threatened nurses and eventually carried Yunus’ corpse away less than 30 minutes after his death.

“What we have done is noble in God’s eyes, but despicable in the eyes of the law,” said a community member identified by the police only as Ramli.

As Indonesia’s virus death toll rises, the world’s most populous Muslim country finds itself at odds with protocols put in place by the government to handle the bodies of victims of the pandemic. This has led to increasing incidents of bodies being taken from hospitals, rejection of COVID-19 health and safety procedures, and what some experts say is a lack of communication from the government.

With over 87% of the country identifying as Muslim, Islamic rituals are commonplace in Indonesia when someone dies. Religion dictates that those practicing must usually bury their dead within 24 hours, the bodies interred without a casket so bodies can lie on their right side facing the holy city of Mecca.

Before the burial, the body is washed by family with soap and scented water, then wrapped in a seamless cloth that is tied at the head and feet. Cremation and embalming are forbidden. A wake is usually not held because prayers for the forgiveness of the dead are said at the gravesite.

But with corpses of coronavirus victims thought to possibly be contagious, government protocols for handling bodies have meant that rituals typically performed by families have fallen on the shoulders of those handling the country’s dead.

Corpse handling officer Sahrul Ridha said his job has changed since the outbreak. Hours are longer, more people are required on shift to handle the bodies, and he’s begun administering religious procedures to the dead because family are unable to.

“Even though it is an emergency situation, we should wash the bodies, do the ablution and shroud the infectious bodies properly,” said Ridha.

Indonesia has confirmed more than 68,000 cases of the coronavirus, including over 3,350 deaths, the most infections and fatalities in Southeast Asia.

At a graveyard in Jakarta, Indonesia’s capital, gravediggers such as Imang Maulana work from early morning into the night as ambulances carrying the bodies of COVID-19 victims arrive throughout the day.

While graves are dug, families must keep their distance, preventing them from performing burial rituals.

Maulana said that if families ask him to perform final prayers, he usually does, as long as he has time to clean himself and prepare for the next burial.

“I think it is one of the ways to deliver my sympathy to the family,” he said. “I feel very sad when I see the family cannot come closer while we bury the bodies. I wonder that if it happens to me or my relatives, we will only be able to pray from a distance.”

Daisy Indira Yasmine, a sociologist at the University of Indonesia, said that while rituals regarding death have traditionally been a private matter in Indonesia, the pandemic has caused the government to intervene with health and safety procedures.

Another issue, she said, is that there is a communication divide between the government and society. The government is urging people to follow health protocols for coronavirus patients, but without the participation of local authorities, messaging if often disregarded.

The time between coronavirus testing and results is also a problem in Indonesia, which has one of the lowest testing rates in the world. Residents in rural areas said that results can take up to a week to come back.

The lack of trust and clear information has become systematic in Indonesia’s fight against the virus. While neighboring countries shut their borders and began lockdowns early in the year, Indonesian officials attributed prayer to the country’s then-low number of virus cases.

This information gap can have serious health consequences. In the city of Makassar on Sulawesi island, five of 13 men who were accused of stealing corpses of COVID-19 victims were put in a quarantine facility after they tested positive for the coronavirus. Officials believe the men may have contracted the virus from handling Yunus’ corpse.

Bodies of coronavirus victims have also been stolen in other places across Indonesia. Local government officials in East Java province called an outbreak related to the theft of a body a “corpse cluster.” In response, Indonesia’s National COVID-19 Task Force chief, Doni Monardo, announced that engagement with the community and religious leaders would begin to help support national health protocols used for curbing the virus’s spread.

“We will continue with the prevention campaign,” Monardo said. “We cannot work alone — we need community support and discipline.”