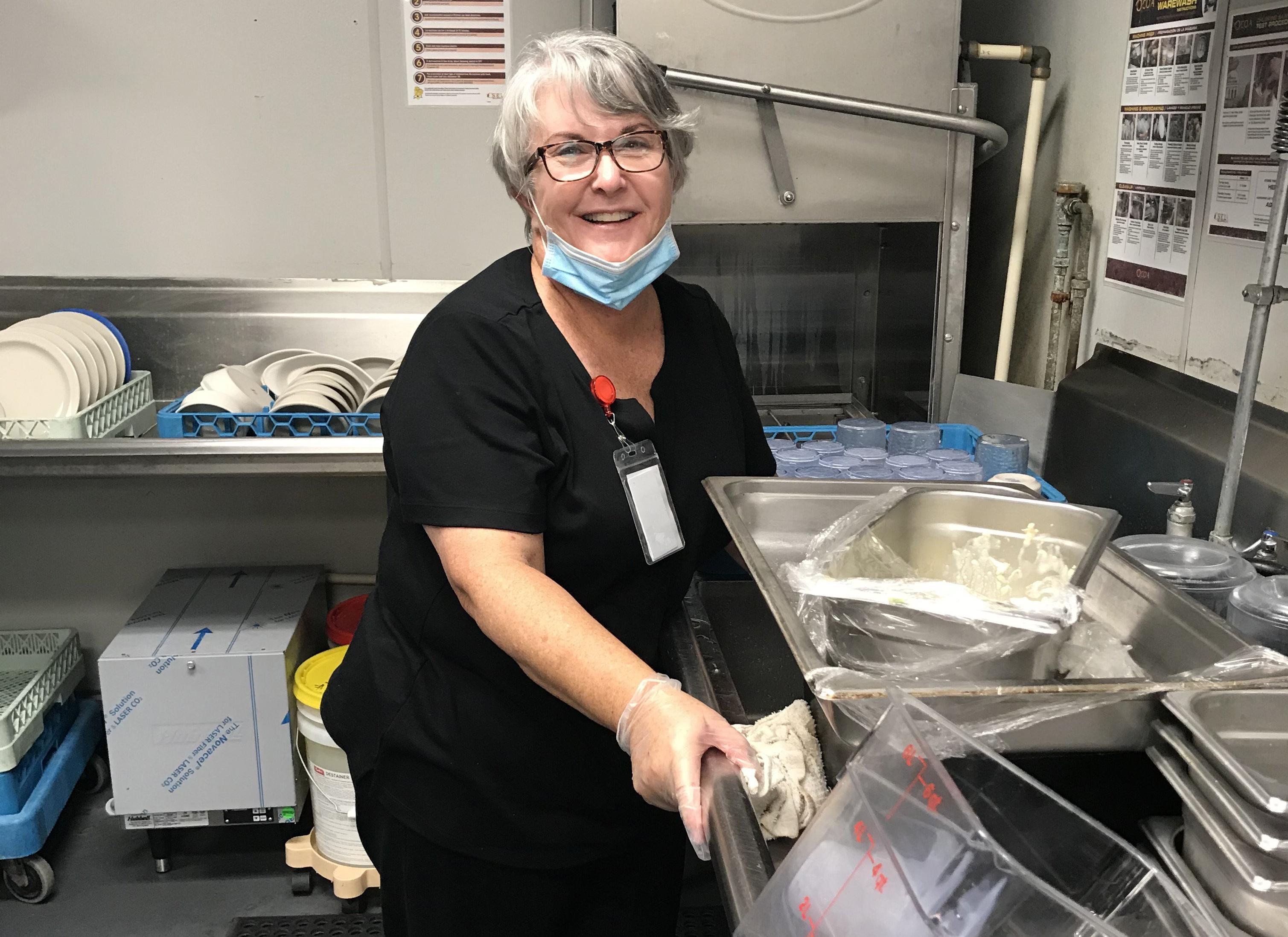 Mary Daniel took a dishwashing job at the memory-care center where her husband lives so she would be able to spend time with him after the center was locked down in March because of concerns over COVID-19.

JACKSONVILLE, Fla. — Twice a week Mary Daniel ties an apron around her waist and starts rinsing dinner dishes at a Jacksonville memory-care center. She then stacks them in a commercial dishwasher, between mopping floors and taking out garbage.

Steve Daniel has been a patient at Rosecastle at Deerwood since last July. In March the facility went into lockdown because of the coronavirus, and the Daniels went 114 days without being able to be together.

Mary did visit him twice after the lockdown, trying to communicate with him through a window. That just made things worse: Steve has Alzheimer’s, and he couldn’t understand why she was there yet couldn’t approach him.

He cried, and his agitation grew, as did her heartbreak.

She knew that he must wonder where she was. Before the lockdown, she came to see him almost every evening.

She knew that his condition is only going to get worse. These are the best days he has left, and she was missing them.

She knew, too, that he, a former orange juice salesman, remained sociable, even as his symptoms worsened. He still walked around the memory-care center, chatting with people, even if his words made no sense. But she worried that his isolation from her, the distress it caused, would eventually kill him.

She had to get inside.

In March she emailed the center. How can I see him? Can I volunteer? Can I bring a therapy dog (she raises puppies for K9s for Warriors)? Can I get a job?

Eventually she got a call back. There’s a part-time job, if you’re interested. Washing dishes.

Steve and Mary Daniel outside Rosecastle at Deerwood, a memory-care center. Mary Daniel took a job as a dishwasher there so she could spend time with her husband, a resident who’s been under lockdown since March.

Finally, she was in.

For the past two weeks, she’s worked a 90-minute shift Thursdays and Fridays. She’s really working, and working hard, she said. After all, she can’t afford to lose this job.

And after her first shift was over, Mary, wearing a mask, went to Steve’s room. She was worried: Would he even remember her?

She needn’t have worried. At the sight of her, he cried. He called her by her name.

They lay together on his bed, holding hands. They watched TV, as in the old days.

She asked him, as she often did before, how his day was. He answered enthusiastically, though his words no longer make sense to her. She helped him get ready for sleep.

She does that after each dishwashing shift. And for a short time, things seem blissfully normal, as normal as possible in a world turned upside down.

“When the world is crazy, just to have an hour to sit with him, and talk with him. He’ll lay his head on my shoulder,” Mary said. “There’s something that comes with that comfort of just being together.”

He was diagnosed with early-onset dementia at age 59. He had been badly confused a couple of times and then drove to the wrong city for a business meeting, so she knew there was something wrong.

The diagnosis was devastating. It seemed so unfair: He was still young, otherwise still healthy. They were planning to travel, to watch football, to visit grandchildren. Now this.

He stayed in their Jacksonville home until last summer, with the help of a caretaker. But he remained gregarious, so Rosecastle, where he could walk around, talk to everyone, seemed a better alternative. It was, Mary said.

Then came the lockdown.

“I absolutely understand why they did the shutdown, that the intentions are certainly well-intended,” she said. “I can’t fault the governor for what he wants to do. The trouble is, he’s isolating them to save their lives, and the isolation is killing them.”

She’s spent time since then reaching out to politicians, trying to find a compromise that would let people see their family members in lockdown.

In a statement, Kelley Withrow, executive director for Rosecastle at Deerwood, said this: “Visitor restrictions have been put in place at communities across our state as a safety measure, aimed at protecting the vulnerable population we serve. But it has been hard on families and residents alike, so we felt creative solutions were necessary, especially in the case of Mary and Steve. We are happy to report that Mary is off to a great start in her new role, and we are excited to see the positive changes in Steve’s demeanor as well.”

Mary said the facility took her new job seriously. She had to watch 20 hours of videos on assisted-living care, and took both COVID-19 and drug tests. She’s now getting tested weekly, voluntarily, while working as a dishwasher.

She said she’s going to use her paycheck to buy gift cards for the staff at Rosecastle. She’s seen the work they put in during the pandemic, caring for those who can no longer see their families.

For her, getting to see her Steve again is enough reward.

“This allows me to be back doing what I’m supposed to be doing,” she said. “He’s not going to walk this journey alone.”

This article originally appeared on Florida Times-Union: Coronavirus kept them apart. She took a dishwashing job to see her husband

Covid-19 is Making That ‘Noise’ in Your Ears and Head Worse, Reveals New Research