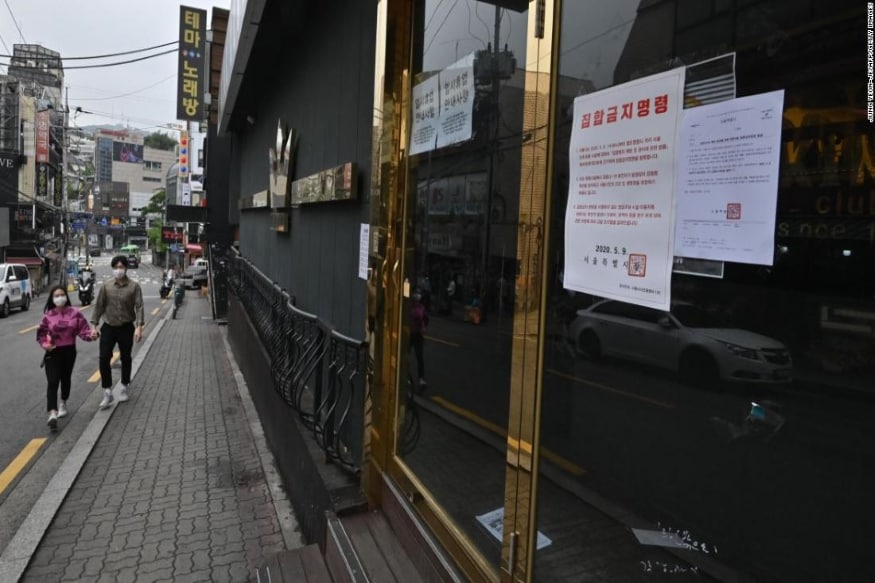 Seoul, South Korea: A cluster of coronavirus cases connected to clubs frequented by South Korea’s gay community has sparked an outpouring of hate speech towards the country’s already-embattled LGBTQ population.

More than 100 cases have been linked to nightlife venues in the South Korean capital, and on Saturday, Seoul ordered all clubs and bars to temporarily close.

The cluster has caused alarm in South Korea, which was among the first countries outside of China to deal with a large-scale coronavirus outbreak. In recent weeks, however, authorities had begun loosening restrictions as case numbers fell.

The suggestion that the outbreak is linked to the city’s gay scene has sparked a huge backlash against the LGBTQ community, including the 29-year-old man believed to be at the center of the cluster.

Local media has emphasized his sexual orientation and reported that the clubs he visited are gay venues, although the venues do not openly describe themselves as such on their official websites or social media accounts.

That reaction could make contact tracing harder, with people afraid to be associated with the LGBTQ community and having their sexuality outed.

Although all three venues linked to the cluster asked for customers’ full names and phone numbers on arrival, the city has been unable to contact almost 2,000 club-goers — meaning they either avoided the calls or gave a false number, Seoul’s mayor Park Won-soon said Monday.

The city has had to employ other measures to track them. Using phone signal tower records, the city found that 10,905 people were in the vicinity of the clubs in the nightlife suburb of Itaewon between April 24 and May 6.

Authorities have texted them all, saying they should get tested. Officials have also used credit cards to track almost 500 people, who have been asked to get tested and self-quarantine.

The number of people who had been tested had nearly doubled between Sunday and Monday, after authorities began offering anonymous tests, Park said Tuesday.

“The growing number of condemnation and hate speech definitely does not help and only has adverse effects,” he said.

The outbreak also showed the need to always be on alert, Park said.

“If the disease penetrates Seoul, the Korean peninsula is penetrated,” he said in an interview with CNN. “We are seriously afraid, trying to find out the visitors as soon as possible.”

How the case unfolded

On the night of May 1 and the early hours of May 2, a 29-year-old man visited several clubs in Itaewon, according to the South Korean Centers for Disease Control and Prevention (KCDC). On May 7, the man tested positive for Covid-19.

KCDC deputy director Kwon Joon-wook said Tuesday that there are now two people identified as first showing symptoms on May 2 and said the Itaewon cluster may have “various epicenters or sources.”

In the camp world of K-pop, it’s hard for stars to be gay

Under non-inforceable pandemic reporting guidelines that were drafted by Korea’s journalist associations, media are told to avoid violating patients’ privacy and using sensational language in reporting.

But as the news broke, several South Korean media organizations reported that the bars the 29-year-old had visited were gay bars. That detail, coupled with the already-publicly available information about the man’s age, district of residence, and movements, meant that the media had effectively outed him, potentially putting his employment at risk.

South Korean authorities have urged the public not to target individuals or specific communities.

On Monday, a Ministry of Health official, Yoon Tae-ho, said that there had been a trend of “criticism and hate against a certain group to which the infection occurred,” without explicitly naming the LGBTQ community.

“Leaking personal information of confirmed patients or spreading baseless rumors not only harms other but could be criminally punished,” Yoon added.

In a statement, LGBT rights advocacy group, Solidarity for LGBT Human Rights of Korea, said the media’s decision to reveal personal details of the 29-year-old patient had incited hatred and was a serious human rights violation.

“The attitude of media, who are obsessed with revealing the sexual orientation of the confirmed case and digging up information that has nothing to do with the disease, is adding a stigma of the disease to the hatred of minorities that has been prevalent in Korean society,” the statement said.

A wider issue of discrimination

That is also a concern of one 25-year-old in Seoul, who identifies as gay and who asked to be anonymous out of fear of discrimination,who says he was at two of the Itaewon clubs connected with the outbreak in early May.

“Gays feel cornered. Either out yourself and potentially ruin your life, or stay in the closet but risk spreading corona,” he said. “Gays are also feeling like there’s this double standards, where they are being asked to be upstanding citizens and ‘get tested for your country,’ meanwhile the country treats them like dirt.”

South Korea has no comprehensive anti-discrimination laws to protect LGBTQ South Koreans, and compared to nearby democracies such as Japan and Taiwan, the country is less accepting of same-sex couples.

LGBTQ soldiers serving in South Korea’s military face abuse and discrimination, according to an Amnesty International report. Homosexual sex is illegal in the military whether it happens on or off base, and regardless of whether one party is not an enlisted soldier — something that is not the case for heterosexual sex.

The 25-year-old says the backlash to the latest cluster is only going to inflame that situation, with many in LGBTQ community afraid they might lose their jobs. Some have been threatened on the gay dating app Grindr, he added.

“Korea is such a homophobic place, these clubs are really a haven for these people,” he says. “I would hate to see them shut down permanently because of this virus or homophobia.”

The night out he had in early May was a normal evening, he says.

“Boys out dancing to K-pop, grabbing drinks, talking to old friends, really innocent stuff,” he said. “It’s frustrating that the media is treating them all like sex clubs.”

How clubs should handle coronavirus

The outbreak has also highlighted the difficulty in containing outbreaks in clubs around the world — regardless of the clubgoers’ orientation.

Bars are often frequented by young people — and experts believe that while this demographic is less likely to die from the virus, they may have contributed to its spread.

That’s an issue that other countries are also thinking about. When New Zealand’s Prime Minister Jacinda Ardern announced Monday that she was easing lockdown restrictions, she opted to delay opening the country’s clubs and bars, pointing to South Korea’s experience.

Allan Zeman, the chairman of Lan Kwai Fong, said that bars only filled about 50% of capacity, tables were spread out, patron’s temperatures were taken and people needed to wear masks before they came inside. Patrons were also encouraged to leave their name and contact details. Over the weekend, many partygoers gathered on the street outside bars, which was “pretty upsetting,” he said.

He expects that bars and clubs will be taking additional precautions — such as temperature checks — for some time, but doesn’t expect people to stop going out altogether.

“It’s human nature — people want to go out, they want to enjoy themselves,” he said. “You need to otherwise you’ll explode.”

Back in Seoul, the authorities are also trying to strike that balancing act. Park said citizens demand economic activities — but at the same time, they needed to deal with coronavirus.

“We are living at the age of coronavirus and human beings (living in) coexistence.”