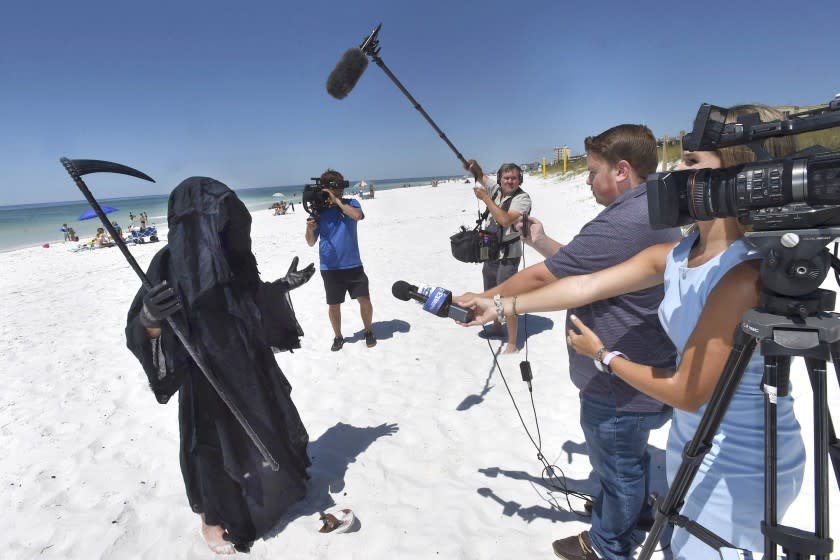 Florida attorney Daniel Uhlfelder, dressed as the Grim Reaper, talks with reporters at a beach near Destin, Fla., on May 1. (Devon Ravine / Associated Press)

Crime writer Carl Hiaasen, the celebrated chronicler of contemporary Florida, once referred to his beloved state as “the poster child of nationwide dysfunction.” That was before the COVID-19 pandemic began killing one of its residents about every nine minutes.

So what would he call it now?

“It’s, it’s … I don’t even know how to describe it,” he stammered. “I’m just following this almost like a daily sports box score, looking at the numbers trying to figure out how much worse it can get.”

Florida is now the U.S. epicenter of the pandemic.

Over the last week, it reported more than 83,000 new cases, well ahead of California and Texas, two much larger states that are also struggling to contain the virus.

Yet in much of Florida the response to the crisis has been little more than a shrug. Disney World has reopened, restaurants and shopping malls are crowded, and Gov. Ron DeSantis has invited four professional sports leagues and the Republican national convention to the state.

“It is like one giant SNL skit,” Hiaasen said. “You just wonder what stupid thing is going to happen next.”

Well, how about a Stanford-educated lawyer dressing up as Death and suing the governor.

His lawsuit, filed in March in Leon County and now on appeal, demanded that the governor close the beaches and impose a stay-at-home order.

Is he surprised how bad things have become? “No, it’s a surprise it’s not worse, frankly,” he said. “But it will be.”

Florida has long embraced its reputation as a punchline, so much so the state bird is the mockingbird.

But how the state became a dystopian landscape is a more traditional tale of political expediency and science denial, with the governor, a Republican and staunch ally of President Trump, repeatedly shifting blame for the crisis while downplaying the threat and ignoring his own health experts.

In May, DeSantis lifted statewide stay-at-home orders after just four weeks, far earlier than many other states. Two weeks later gyms and restaurants were allowed to reopen and by the first week of June so were bars, tattoo parlors and Universal’s theme parks.

But the push to reopen the economy for the summer tourist season came at a massive cost: Six days later Orlando, where Universal’s parks are located, saw a huge jump in cases. That was the start of a steep, statewide climb.

Over the last month, Florida has seen its caseload jump from about 80,000 to 315,755. The death toll has climbed from just under 3,000 to 4,676, the eighth highest in the country. At least 54 hospitals across Florida have reported that their ICU wards are full.

Protesters demand that Florida businesses and government reopen during a march in Orlando on April 17. (John Raoux / Associated Press)

The governor has blamed the failure to contain the virus on the media, Latino day laborers, expanded testing, young people and parties. On Wednesday, he said delayed test results were the problem.

Even as the numbers surged, DeSantis pledged not to impose new shelter-in-place rules and began pushing for schools to reopen and free parents to go back to work.

He has also refused calls to issue a statewide order mandating face coverings in public, leaving it to the counties to implement their own guidelines.

That has resulted in a hodgepodge of confusing and contradictory regulations.

Jerry Demings, the Democratic mayor of Orange County, issued an executive order last month requiring facial coverings in public there. But he made compliance voluntary.

At Disney Springs, a sprawling outdoor shopping, dining and entertainment center not far from the theme park, guests must have their temperature checked before entering. Facial coverings are required, hand-sanitizing stations are everywhere, and the PA system blasts reminders for guests to wash their hands and avoid touching their faces.

Across town at the Florida Mall, a massive indoor complex with nearly 300 stores and restaurants, there are no mandatory temperature checks, no announcements and no enforcement of the guidelines that customers and employees wear masks.

“I guess they’re not taking it seriously,” one worker at a soft-pretzel kiosk said as he pulled a black cloth mask up over his nose.

In other parts of the state, concern about the virus is starting to change behavior.

Hiaasen, who lives in Vero Beach, on the Atlantic coast, said that after weeks of “people just sort of parading around and proudly breathing their infected mist into the air,” masks have become common there.

“I think there was some sort of … moment where one of their loved ones got sick or they tried to go to a hospital and the hospital was full,” he said. “It’s dawned on them to say, ‘OK, no matter what our politics are, maybe we should put on a mask.'”

They passed the measure over the objection of dozens of mask-less protesters who filled the commissioners’ chambers. Four protesters later filed a 78-page lawsuit claiming the order “interferes with personal liberty and constitutional rights.”

A protest in May in Doral, Fla. (Lynne Sladky / Associated Press)

A maskless Walmart shopper in Palm Beach County took things a step further, pulling a gun on another customer and a young girl who approached him about his lack of facial covering.

This month in Miami-Dade and Broward counties, where the virus has killed more than 1,700 people, leaders ordered the wearing of face masks in public at all times.

Janet Librizzi, a 67-year-old title clerk for a Broward County car dealer, was recently told to stay home for two weeks after reporting to work with a runny nose. Her COVID-19 test was negative, but for the last four months visits with her grandchildren have been limited to waves through a window.

“I’d rather wear a mask than be in a coffin,” she said.

But she said there are still many people who believe the pandemic is a hoax or that masks are useless.

“Anybody who thinks that this is a hoax or it’s not real, they need to go visit a hospital and see what it’s like,” she said.

“The amount of frustration I feel towards Floridians is indescribable,” she said. “A huge wave of humiliation.”

Dr. Jeremy Faust, who works in the emergency room at Brigham and Women’s Hospital in Boston and has worked extensively on health policy issues, said it is now clear that Florida closed too late and opened too early.

“[When] you have a shorter shutdown, you just haven’t done enough to really contain things,” he said.

However, he said, the state also faces a unique challenge in its demographics: A quarter of the population is 18 or younger while 20% of the state is 65 or older.

“On one hand there’s a younger population that goes out and feels invincible and is probably picking up this virus,” he said. “And at the same time, it’s got the most number of seniors of any state in the country.”

For now, state officials say that many of the new infections are in young adults, whose resilience has helped control the death toll. Faust cautioned that things could shift rapidly.

“You’re really playing with matches there because you could end up having a bunch of young people get it and transmit it to the seniors, who are going to start really having high mortality rates from this,” he said.

He called for an immediate shutdown of the state and a testing strategy that would allow health professionals to detect flare-ups when the state reopens.

“I’m skeptical that we can make it go away,” he said. “But I’m optimistic that we know enough of what to do that we could make this problem 90% better, which is a good place to be while you are in search of a vaccine or medicines that work. “

Hiaasen, who knows his rebellious state better than anyone, isn’t so optimistic.

“This is just an epidemic of moronic behavior, where you have people doing things on purpose that are known to be dangerous, either out of some misguided act of political defiance or some just Neanderthal sense that they’re bulletproof,” he said. ”At this point, this many months in, you still don’t get it?

“That’s the circus part of this.”