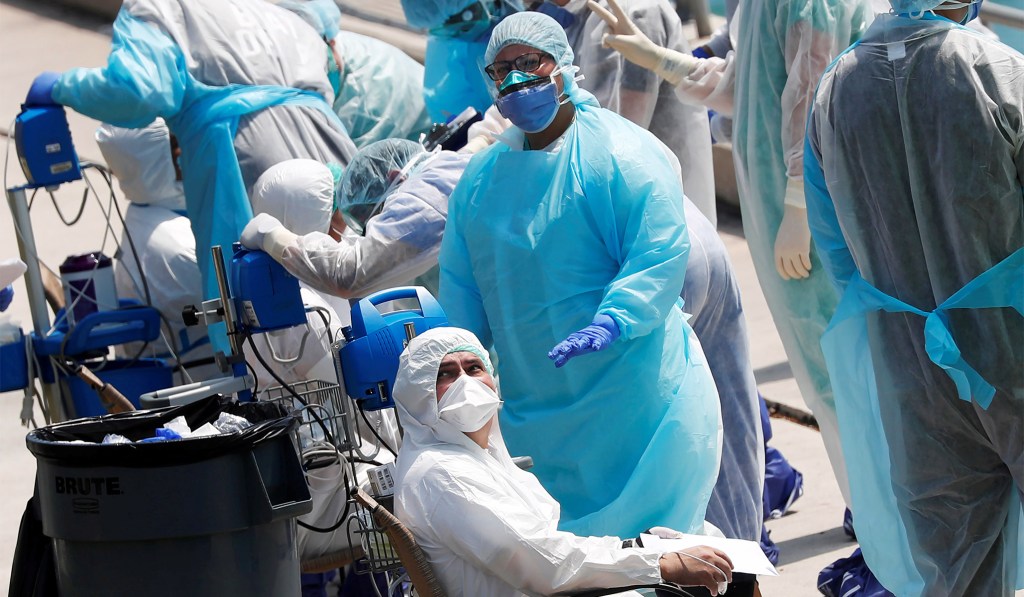 Although there is still much we don’t know about the coronavirus, we know enough to say that it is far more dangerous and deadly than the flu. It took twelve months and 61 million infections for the H1N1 swine flu to kill 12,500 Americans in 2009–10. The Centers for Disease Control estimated that the seasonal flu killed 34,200 Americans during the 2018–19 flu season. In 2019, car crashes killed 38,800 Americans.

As for the new coronavirus? On March 20, the death toll in the United States was 225. By April 20, the coronavirus had killed more than 42,000 Americans.

Last week The New Atlantis produced a chart that starkly portrays just how quickly COVID-19 became one of the leading causes of death in the United States:

Despite the rapidity with which the coronavirus has killed tens of thousands of Americans, some on the right have continued to argue that the pandemic will end up being no more serious than a bad flu season. On Fox News last week, Bill Bennett said that “we’re going to have fewer fatalities from this than from the flu.” He pointed to the fact that the IMHE model from the University of Washington estimated that COVID-19 would most likely kill about 60,000 Americans and that the seasonal flu killed 61,000 Americans in 2017–18, a particularly bad flu season.

But as Rich Lowry pointed out last week, “if we are going to have 60,000 deaths with people not leaving their homes for more than a month, the number of deaths obviously would have been higher — much higher — if everyone had gone about business as usual.” Indeed, the IMHE model is making an estimate of the death toll only for a first wave of infections, and most of the country will still be vulnerable to infection after the first wave passes.

While there are 800,000 confirmed coronavirus cases in the United States — that’s 0.24 percent of the U.S. population — former FDA commissioner Scott Gottlieb has noted that anywhere between 1 percent and 5 percent of Americans may have actually already been infected with the virus. But that’s far short of the 50 percent to 70 percent required to achieve herd immunity. The seasonal flu, by contrast, infected 12 percent of the American population last year because we have a flu vaccine and some more immunity from previous infections.

Not only does the new coronavirus have the potential to infect many more people than the seasonal flu does, it appears to kill a greater percentage of those infected. You don’t need to rely on various statistical models to come to that conclusion. You just have to look at the reality of what has already happened around the world and in our own country.

The seasonal flu kills 0.1 percent of people infected, but the new coronavirus has already killed 0.1 percent of the entire population of the state of New York. That may seem like a small percentage. But imagine the entire country getting hit as badly as New York state: 0.1 percent of the U.S. population is 330,000 people. And there’s no reason to believe that New York’s current death toll marks the upper limit of the virus’s lethality.

The Wall Street Journal reported that confirmed coronavirus deaths in the Italian province of Bergamo (population 1.1 million) had killed 0.2 percent of the entire population in one month. The true percentage may be higher: There were 4,000 more deaths in Bergamo in March 2020 than the average number of deaths in March in recent years, but only 2,000 of those deaths were attributed to confirmed COVID-19 cases.

And then there’s the experience of China, where the official death toll in Wuhan is 2,500, according to the Communist regime. But there are reports that the true death toll in Wuhan (a city of 10 million) was more than 40,000 people. That’s 0.4 percent of the city’s entire population.

Almost all conservatives are skeptical of Communist China’s official coronavirus death toll. Why, then, do some think that the coronavirus is not much more deadly than the flu? Did Communist China, a regime not known for valuing human life, shut down much of its economy for a couple of months because of a bad flu? Or did Communist leaders fear that without the costly shutdown the virus would inflict much greater harm on their nation and threaten their grip on power?

You don’t have to have a Ph.D. in epidemiology to answer those questions.

No nation can afford to endure a lockdown until a vaccine is developed for the new coronavirus. But having a proper understanding of the virus’s past and present danger matters. Knowing that it is extremely unlikely that the threat will be gone once the first wave passes will help guide the government, businesses, and individuals to take precautions that will limit the virus’s death toll in the months to come.

Elon Musk Calls Covid-19 Take a look at ‘Bogus’ After Testing Constructive and Adverse on Similar Day, Will get Slammed

Covid-19 Virus Has Been Circulating in Bats for A long time: Examine