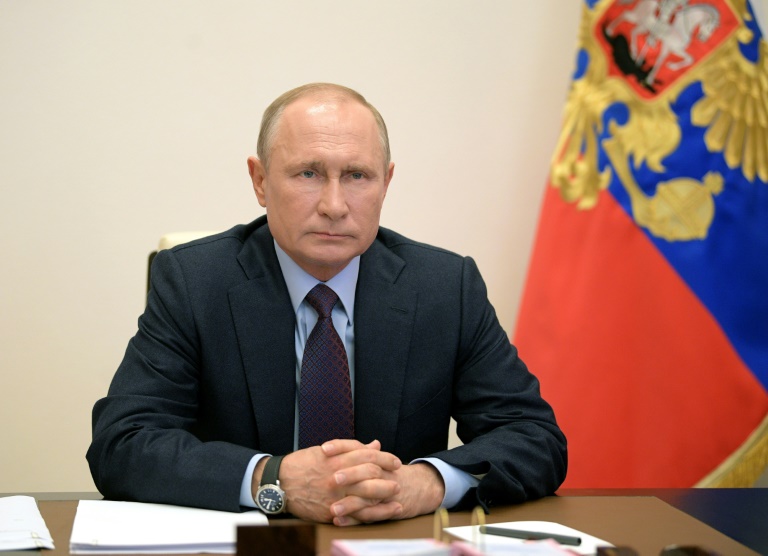 Moscow (AFP) – The bombastic military parade through Moscow’s Red Square on Saturday was slated to be the spectacle of the year on the Kremlin’s calendar.

Standing with Chinese leader Xi Jinping and French President Emmanuel Macron, President Vladimir Putin would have overseen a 90-minute procession of Russia’s military might, showcasing 15,000 troops and the latest hardware.

But that was before the coronavirus pandemic.

Now, military jets will roar over an eerily quiet Moscow, spurting red, white and blue smoke to mark 75 years since the defeat of Nazi Germany. Putin will lay flowers at a war memorial near an abandoned Red Square and address a nation growing angry with his handling of the country.

The parade is not the only victim of the coronavirus pandemic, which has crippled Russia’s economy, hospitalised the prime minister and slashed Putin’s approval ratings.

Russians had been due last month to cast their votes on constitutional reforms that would have paved the way for Putin to stay in power until 2036, but those plans too were scuppered by the virus.

What was supposed to be a triumphant spring for Putin has become a political letdown, observers say, one that could be difficult for the president to recover from.

“This is the first time in 20 years that Putin is facing a crisis this serious,” said political analyst Tatiana Stanovaya. “This is a new experience for him.”

The timing of the pandemic, hitting just as Putin was unveiling major constitutional reforms, amounts to “a powerful blow to his plans”, she told AFP.

After initially reporting fewer cases than in western Europe, Russia has witnessed a grim and steady rise in new coronavirus infections in recent days.

Health officials registered another record increase on Thursday and the country now ranks fifth in the world in overall infections.

Russia’s death rate is low compared to the European countries hardest hit, but some observers say that discrepancy is due to how the death count is calculated.

Putin this week praised the government’s response, saying that by implementing mass testing and keeping fatalities low, Russia had become a model for other countries.

“What we did was absolutely right,” he said. “Many foreign countries followed our path.”

Yet many Russians appear to disagree. Unlike other world leaders battling the pandemic, Putin’s approval ratings have not rallied in light of the crisis.

According to independent pollster Levada, they fell to a historic low of 59 percent last month from 63 percent in March.

Already strained by Western sanctions, Russia’s economy is under serious threat from the pandemic, which analysts say could deepen resentment towards the Kremlin.

Since Russia imposed a lockdown to slow the spread of the virus, small businesses have struggled to survive and millions of Russians have been left without wages, despite promises from the government to support companies and employees.

Igor Nikolayev, director of the Institute for Strategic Analysis at FBK Grant Thornton, said the timing of the crisis was unfortunate as it coincided with a steep fall in the price of oil, a key export which balances the Russian budget.

He said Russians were not prepared for this dual shock, noting that 60 percent do not have savings and that real incomes have fallen 7.5 percent over the last year.

Russia can weather the storm for around 18 months, he said, thanks to reserves in its sovereign wealth fund of some $150 billion.

But if the crisis persists and “life does not become easier, this will affect the attitude of the people to the authorities,” Nikolayev told AFP.

Putin could well bounce back. He has weathered many crises over 20 years in power and is credited by many Russians for bringing the country out of the chaos of the 1990s and restoring its global prestige.

Officials have said both the parade and the constitutional vote will be held later in 2020, though analyst Andrei Kolesnikov said that alone may not be enough to salvage Putin’s year.

Putin “enjoyed Russians’ approval for many years,” said Kolesnikov, of the Carnegie Moscow Centre. “Now he will personally accumulate all their disapproval.”

“In the context of the coronavirus crisis, the vote will not mobilise the nation,” he said, and the military parade alone “will not seriously help support Putin’s falling ratings.”

Stanovaya said that after so many years in power Putin has “distanced himself from the people” and lost the ability to empathise with Russians.

If the Kremlin cannot address economic problems, “social irritation will grow, there will be protests,” she warned.

Coronavirus ‘Isn’t Nearly as Deadly as We Thought’