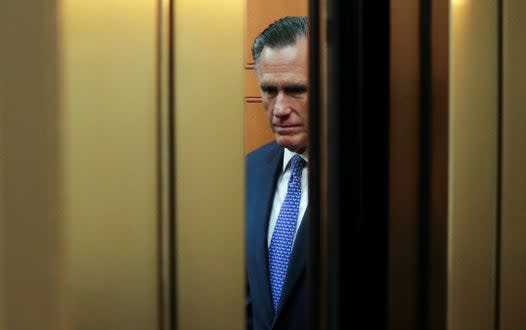 The Republican coronavirus relief package will include legislation from Senator Mitt Romney that could result in cuts to Medicare and Social Security.

Senate Majority Leader Mitch McConnell confirmed Thursday that the upcoming relief package would include the legislation.

Mr McConnell told the Senate that Mr Romney’s TRUST Act is “a bipartisan bill, co-sponsored by Senate Democrats, to help a future Congress evaluate bipartisan proposals for protecting and strengthening the programmes that Americans count on.”

Though the TRUST Act is being touted as a means to protect the New Deal-era social safety programmes, critics say it would allow for cuts to the program to be pushed through Congress with minimal opposition.

“This would allow benefit cuts to be fast-tracked through Congress,” Max Richtman, president and CEO of the National Committee to Preserve Social Security and Medicare, told Common Dreams. “Seniors and people with disabilities need their benefits boosted, not slashed. Like payroll tax cuts, the TRUST Act is bad medicine for everyday Americans struggling to stay financially afloat, especially during the Covid crisis.”

Nancy Altman, the president of Social Security Works, said the legislation would “undermine the economic security of Americans without political accountability.”

Democratic Representative John Larson, the chairman of the House Ways and Means committee, said the act would be a “direct assault on Social Security.”

“During a pandemic, people are relying on Social Security now more than ever,” Mr Larson said in a statement. “These are Americans’ earned benefits. Cutting them will only further hurt the economy.”

In addition to the TRUST Act, Donald Trump wants to include a payroll tax cut in the next round of coronavirus relief legislation.

Legislators on both sides of the aisle have pushed back on the payroll tax cut, claiming it would only benefit the wealthiest Americans rather than helping those with low incomes survive during the pandemic.

“It doesn’t really target the people who are most in need of support right now, people who are unemployed who have been hit by a serious financial shock,” Shai Akabas, director of economic policy at the Bipartisan Policy Center, told CNBC.

Rachel Grezler, a research fellow at the conservative think tank The Heritage Foundation, said she does not believe the payroll tax-cut will ultimately affect Social Security.

“The payroll tax in and of itself shouldn’t change the trajectory for Social Security,” she said.

She said under the tax cut, Social Security would be bolstered by funds from the US’s general revenue. That, however, would increase the national debt and shrink the economy.

“That is going to lead to, at some point in the future, a smaller economy and that’s going to mean lower contributions into Social Security,” Greszler said.

Either way, the end result will be fewer funds paid into Social Security, which Alex Lawson, executive director of Social Security Works, believes is the ultimate goal of the Republicans.

“Donald Trump and his stooges in the Senate can’t stop trying to rob us of our Social Security,” Mr Lawson said. “They will use every opportunity and every crisis–including the mass death and economic carnage from Covid–as cover for their sick desire to destroy our Social Security system.”