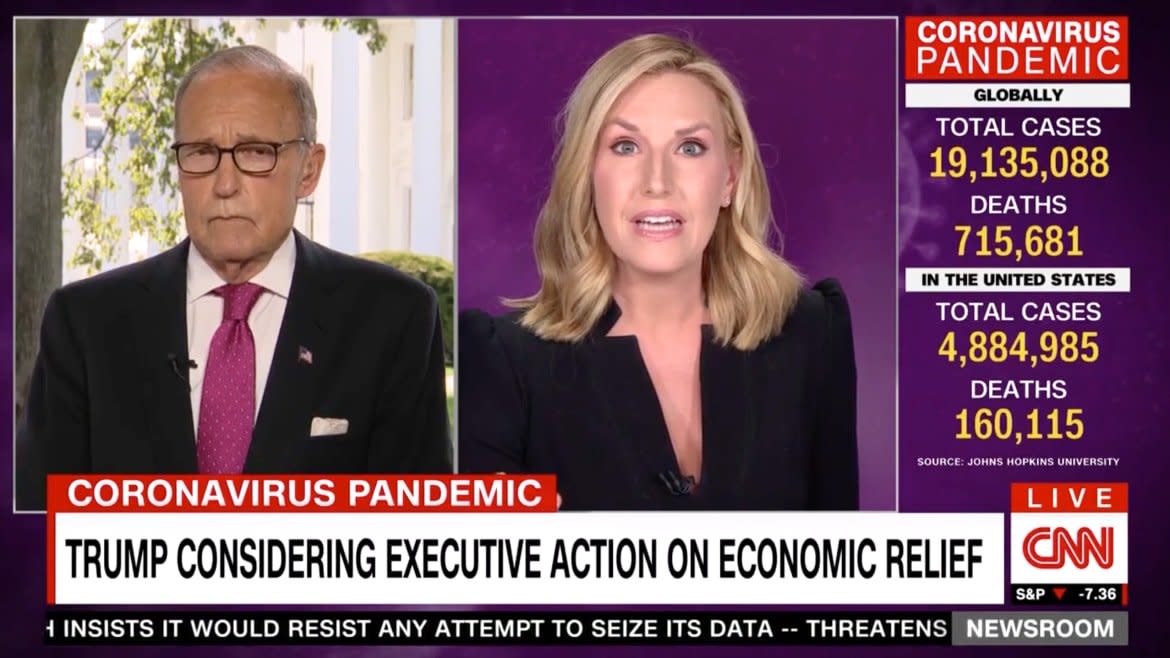 White House economic adviser Larry Kudlow doesn’t have the best track record when it comes to predictions. And CNN anchor Poppy Harlow was more than ready with the receipts when he came on her show to talk about the coronavirus fallout Friday morning.

Harlow began her interview by asking Kudlow if he and President Donald Trump are “worried” about the slowdown in the recovery.

“I don’t know that there’s a slowdown. These job numbers will go up and down,” Kudlow replied. When Harlow noted that only 1.8 million jobs were added in July compared to 4.8 million in June, he said, “That is true, and it’s going to be uneven as it always is.”

Kudlow continued to push the administration’s argument that a $600 weekly federal unemployment benefit has been a “disincentive” for Americans to go back to work. And when Harlow asked for evidence, he pointed to a University of Chicago study that supposedly supports that claim.

“But, Larry, the University of Chicago survey, it doesn’t conclude what you’re arguing,” Harlow said. “I know you don’t want to incentivize people to go to work when it’s a dangerous situation for them to go because the virus is not under control,” she added, noting that she talked to the author of that study who said “it’s a mistake to draw the conclusion as you have been and the White House has been that right now it’s a disincentive to go back to work.”

All Kudlow could say in response was, “We can argue one academic versus another, I think history shows this is probably not sustainable in the long term.”

Asked to explain why he’s been wrong about the coronavirus at every turn — he said the virus was “contained” in February, for instance — Kudlow takes umbrage with Poppy Harlow for “nitpicking” pic.twitter.com/bNvNP8Qj4r

But the most contentious moment of the interview came later when Harlow confronted Kudlow for his rhetoric over the past several months about the pandemic itself.

“I’m wondering why you have consistently downplayed the severity of the pandemic,” she said. “Back on February 25th you said ‘it’s pretty close to air tight.’ February 28th, ‘it’s not going to sink the American economy,’ March 6th, ‘let’s not overreact, America should stay at work.’ And just on June 12th, ‘there is no emergency, there is no second wave,’ but since June 12th, 45,978 Americans have died from COVID.”

Kudlow attempted to defend his consistent downplaying of the virus’ severity but after a few moments he just resorted to attacking his interviewer.

“I kind of resent your little nitpicking here because I don’t know what that has to do with today’s job numbers,” he said.

“I’m not nitpicking, Larry,” Harlow replied. “I think people listen to you and the president when you say things about the pandemic.”

Ultimately, he may have been chastened enough to acknowledge his own fallibility when it comes to predicting the future. “I think, again, the health guidelines that we have put out are in fact working, so I’m keeping my fingers crossed, maybe prayerfully, that we’ve seen the worst of this extension so we’ll see what happens.”

COVID-19 vaccine will not ‘save us from this present surge’