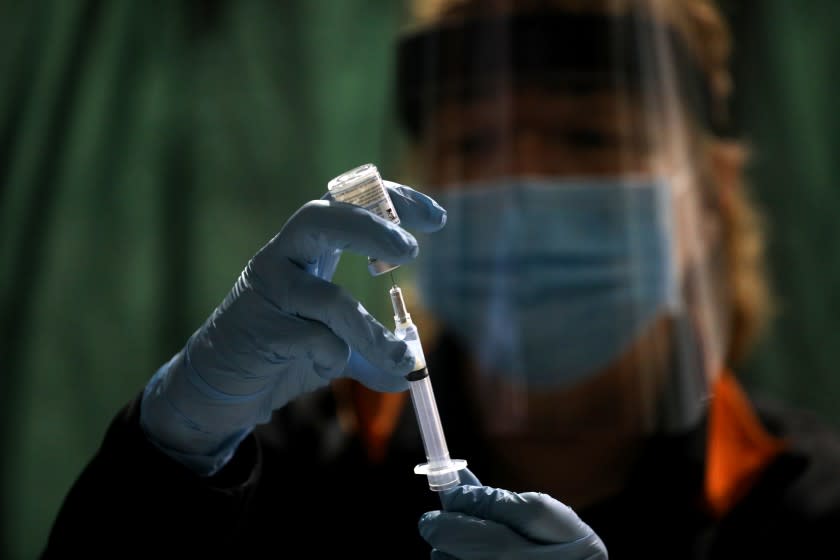 The COVID-19 vaccine developed by Moderna and the National Institutes of Health caused very few cases of severe allergic reactions during the first three weeks of its administration across the country, according to a new report from the Centers for Disease Control and Prevention.

Among 4,041,396 doses given over 21 days, a total of 10 cases of anaphylaxis were confirmed by CDC investigators. Another four cases of possible anaphylaxis are still being investigated.

No deaths have been tied to the vaccine.

“Based on this early monitoring, anaphylaxis after receipt of Moderna COVID-19 vaccine appears to be a rare event,” the researchers wrote Friday in the CDC’s Morbidity and Mortality Weekly Report.

Anaphylaxis is a severe allergic reaction that can be fatal if not treated promptly. It can be triggered by a vaccine, or by exposure to certain foods, medications, insect stings or latex. The usual treatment is an injection of epinephrine, which relaxes the muscles that prevent air from reaching the lungs.

The 10 cases were reported to the Vaccine Adverse Event Reporting System, which the CDC maintains with the Food and Drug Administration to track safety issues that emerge after vaccines are rolled out to the public. They were scattered across the country and involved different lots of vaccine.

A total of 1,266 adverse events tied to the Moderna vaccine were serious enough to be reported during the three-week period. That’s a rate of 0.03%.

For the sake of comparison, the Pfizer-BioNTech vaccine had an adverse event rate of 0.2% during its first 10 days.

Here’s what the CDC investigators learned about the 10 cases of anaphylaxis:

• All 10 of the patients were women. Even considering the fact that women accounted for more than 60% of all people who got the Moderna vaccine, that skew is notable. In general, 80% of anaphylaxis cases reported to VAERS involve women, the researchers noted.

• The median amount of time it took for the anaphylactic reactions to begin was 7.5 minutes after getting the vaccine.

• Nine of the patients began experiencing symptoms within 15 minutes, including one who suffered her first symptom just 1 minute after receiving the shot. The 10th patient didn’t show any signs of trouble until 45 minutes had passed.

• Four patients were treated in a hospital emergency room and then were sent home.

• The remaining six patients were admitted to a hospital. Five of them ended up in an intensive care unit, and four of them had to have a plastic tube threaded into their tracheas to help them breathe.

• Nine of the 10 patients had a history of allergies, including six who had previously experienced an allergic reaction to medications.

• Five patients had experienced anaphylaxis before, though none of their cases had been triggered by a vaccine.

The CDC authors confirmed another 43 cases of other allergic reactions, 60% of which were deemed “nonserious.” Patients experienced rashes or itchy skin, an itchy feeling in their mouth and throat, a feeling that their throats were closing up, and respiratory symptoms.

Half of these patients experienced symptoms within 15 minutes of receiving the vaccine, and 73% of them had symptoms set in within half an hour.

In 60% of cases, the patients had a history of allergic reactions, usually to medicines or food.

The FDA granted emergency use authorization for the Moderna vaccine on Dec. 18. The Pfizer-BioNTech vaccine was authorized for emergency use a week earlier.

The CDC advises that anyone who has an “immediate allergic reaction” to a first dose of either the Moderna vaccine or the Pfizer-BioNTech vaccine should not receive a second dose. In addition, patients should be asked about past allergic reactions before getting either vaccine, the agency says.

Vaccination sites are advised to monitor people for up to 30 minutes after they receive their injections, and to have epinephrine on hand to treat anyone who has a bad reaction to either vaccine.

‘Unethical’ to unfold COVID-19 for sake of herd immunity: WHO