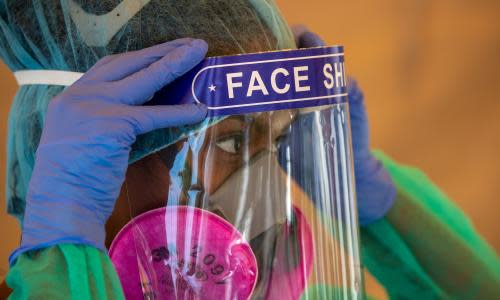 California has experienced one of its toughest weeks yet in the battle against coronavirus, with the state chalking up its two deadliest days since the start of the pandemic as cases continue to rise.

On Wednesday the state topped its previous single day death toll, reporting 149 fatalities. That was followed a day later by the second-deadliest day, when the state tallied 137 fatalities.

Related: Over 40 Florida hospitals max out ICU capacity as Covid-19 cases surge across US

California has now reported 296,500 coronavirus cases and 6,700 deaths, according to public health data. The governor, Gavin Newsom, said on Thursday the state’s seven-day average had topped 8,000 new cases a day, its highest yet.

Meanwhile, new infections, hospitalizations and admissions to ICUs have all increased steadily, landing half of California’s 58 counties on the state’s “watchlist”, where public health officials closely monitor metrics such as infections, deaths and hospital capacity.

Reopening has also been stalled on several fronts. Counties on the state’s watchlist for three consecutive days are required to close bars and dine-in restaurants for at least three weeks. On Friday, San Francisco announced it would not be opening many businesses on Monday as planned – including barber shops, hair salons and gyms – on account of the surge.

Infections and hospitalizations ballooned after Memorial Day weekend, when thousands of residents marched in protest of police brutality; outbreaks emerged from family gatherings and as loosened restrictions in counties saw the openings of bars and dine-in restaurants.

Since the holiday weekend, hospitalizations more than doubled in southern California’s Riverside, Ventura and Orange counties. Orange county has emerged as a seat of organized resistance to mandatory mask orders.

In Los Angeles county, where officials say one in 140 people are probably carrying the disease unknowingly, Barbara Ferrer, the public health director, told the Los Angeles Times that people who are fatigued by extended stay-at-home orders and have prematurely tried to return to pre-pandemic life contributed to the wave of new cases.

As the number of cases and deaths booms, so have the lines of people waiting to get tested.

The state is conducting more tests than ever, but that hasn’t prevented facilities from becoming overwhelmed, worrying health officials that demand has outpaced capacity.

In San Bernardino, where cases have tripled since Memorial Day, health officials have had to cancel hundreds of appointments for coronavirus tests, citing a shortage in materials.

All testing appointments in Los Angeles county were booked throughout the week, the Associated Press reported. Sacramento closed testing clinics because labs ran out of supplies. In San Diego, residents waited 10 days for tests.

Christina Ghaly, the county’s director of health services, said that just two weeks ago thousands of testing slots went unused, but that changed after the Fourth of July weekend as people raced to facilities to find out if they were infected. The backlog will probably continue, she said.

“It’s very likely that in the days and weeks to come, testing access will continue to be insufficient to meet the demands,” Ghaly said.

“As more states begin to scale their testing capabilities, new constraints are materializing within the supply chain. Simultaneously, laboratories are becoming overwhelmed with high numbers of specimens.”

That has led public health officials in Los Angeles county to shift guidance and prioritize testing for those showing symptoms, working in a high-risk environment or have had contact with Covid-positive patients.

California is entering peak wildfire season just as coronavirus cases and fatalities reach record highs. The conditions create a two-sided battlefront that will tax resources, stretch the state’s capacity to provide medical care, and pose new challenges should residents need to seek shelter if wildfires lay waste to their communities.

Already this season more than 4,000 wildfires have erupted, topping the average for this time of year by more than 1,500, said Newsom on Thursday.

“We are in peak fire season,” said Thom Porter, the CalFire chief. “That means that fires aren’t just going to go out as the sun goes down.”

A particular challenge presented by the pandemic could be a lack of firefighters. Inmate crews, long a mainstay in the state’s response to fires, have been depleted due to isolation and safety precautions.

The state is also facing massive outbreaks among inmates at several state prisons, including San Quentin. On Friday, prison officials announced that up to 8,000 prisoners would be released by the end of August in order to curb the spread of the virus.

32 percent of Americans have seen coronavirus bias against Asians

RBI guides to relief during the pandemic

Pat Cummins Hailed With Memes For Donating $50,000 to India’s Combat Towards Covid-19