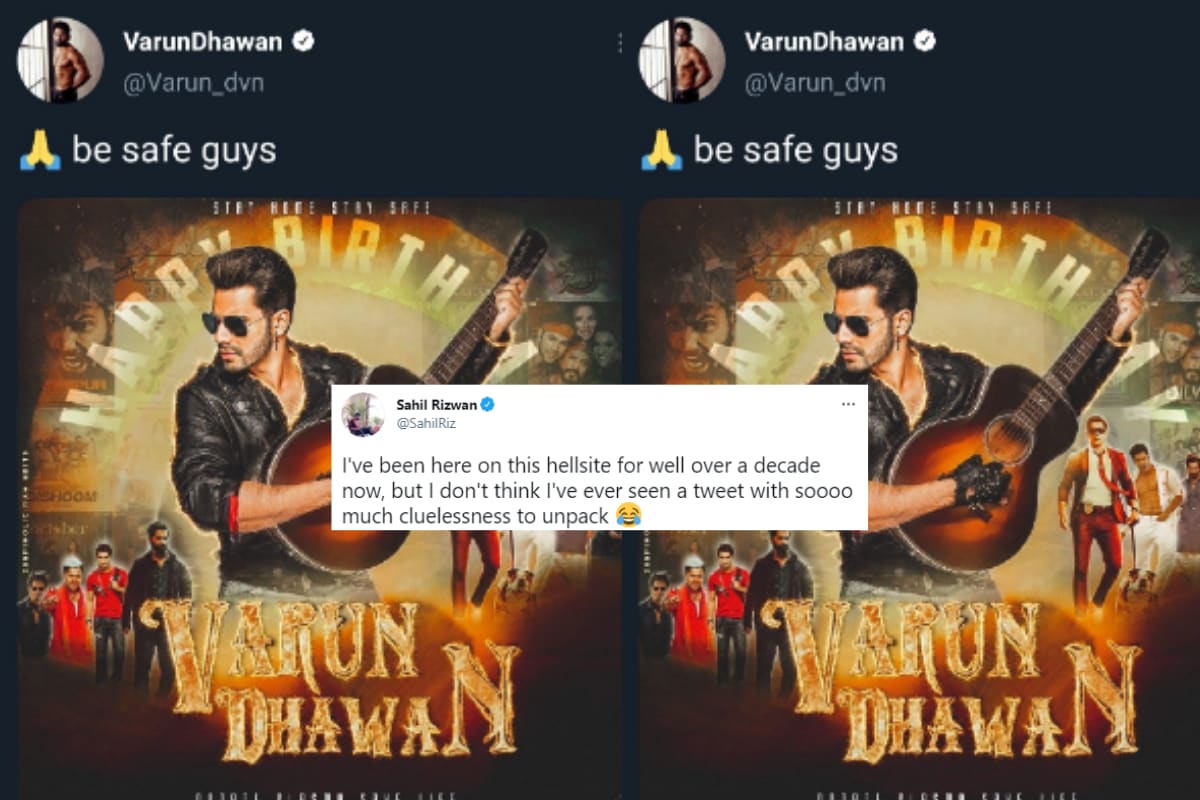 India is in crisis. Reports of a shortage of hospital beds, oxygen cylinders, ambulances and essential medicines have been reported from across states such as Maharashtra, Gujarat, Uttar Pradesh, and cities like New Delhi. To fight this, good samaritans online and on-ground are helping round the clock to assist and amplify the voices of those who are in dire need. Many who are down with Covid-19 and unable to leave their houses are being fed by volunteers with doorstep delivery of home-cooked meals.

Doing their bit, doctors and celebrities are posting daily reminders on social media that masking up and keeping a safe distance are still the best practices to follow during the coronavirus pandemic.

One such well-meaning tweet came from Bollywood actor Varun Dhawan on Tuesday when the Badlapur star tweeted by saying: “be safe guys.” Dhawan tweeted so with a “common DP” of himself.

While Dhawan’s heart was in the right place, his tweet spread like wildfire on the microblogging site Twitter. “What is he trying to say?” asked many users who called the actor “clueless” and felt that Dhawan’s post was “tone-deaf” at best.

I’ve been here on this hellsite for well over a decade now, but I don’t think I’ve ever seen a tweet with soooo much cluelessness to unpack 😂 https://t.co/9M3FnG8XxH— Sahil Rizwan (@SahilRiz) April 20, 2021

Some likened Dhawan’s tweet to the selfies that Bollywood legend Amitabh Bachchan occasionally shares on his Twitter feed.

Is he wishing himself and trying to convey a message? Is he becoming Amitabh Bachchan Part II?— Mitra Joshi (@mitrajo) April 20, 2021

Dhawan’s poster was made for his birthday (24 April).

Its an absolute pleasure to launch the birthday common DP for one of the most humble actors I have interacted with, through my career in journalism, @Varun_dvn. Stay Home, Stay Safe! Designed by @deepholic_ram

Facing the wrath of social media, the actor promptly deleted his post. Acknowledging that he had perhaps goofed up, Dhawan responded to the social media backlash.

“Well it was to make someone happy who made the graphic and requested it but I guess this medium Shouldn’t be used for that right now,” he tweeted in response to a Twitter user.

Well it was to make someone happy who made the graphic and requested it but I guess this medium Shouldn’t be used for that right now. https://t.co/STQ4DIAcZU— VarunDhawan (@Varun_dvn) April 21, 2021

Meanwhile, Varun Dhawan and Kriti Sanon have been shooting in Ziro, Arunachal Pradesh for their upcoming movie Bhediya. A new video from the location has surfaced online that shows Dhawan dancing to his movie song Badrinath Ki Dulhaniya.

The White Home ordered a browbeaten CDC to make use of COVID-19 to deport migrant youngsters, save a canine