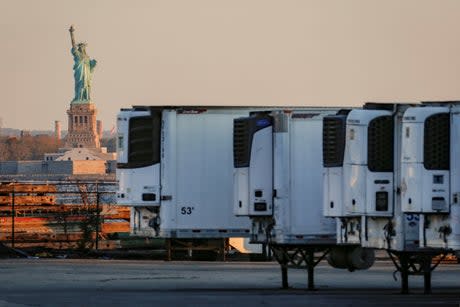 The White House has ordered US flags to fly at half-mast to recognise the deaths of 500,000 Americans from the coronavirus pandemic, as the nation reaches the grim milestone in the public health crisis within a year of the outbreak.

At 6pm on Monday, President Joe Biden will deliver remarks from the White House before a memorial service to mark half a million lives lost to Covid-19, including a moment of silence and a candle-lighting ceremony with First Lady Jill Biden, Vice President Kamala Harris and Second Gentleman Doug Emhoff.

US flags will remain at half-mast for five days, according to White House press secretary Jen Psaki.

A year after the US recorded its first confirmed Covid-19 infection, the nation was in the middle of the deadliest month of the pandemic, with more than 95,000 deaths, or roughly one-fifth of all recorded coronavirus deaths by that point on 21 January, hours after Mr Biden’s inauguration.

“Our focus is on building out of the hole we inherited,” she said.

On Friday, the president travelled to a Pfizer facility in Michigan to promote his administration’s vaccination efforts, reviving a pledge to secure roughly 600 million doses by the end of July, or enough shots for every American. He has stressed that the capacity won’t necessarily mean every American will be inoculated from the disease by then, pending distribution schedules, but the supplies should be available.

The US could be “approaching normalcy” by the end of 2021.

“The vaccines are safe,” the president said on Friday. “Please, for yourself, your family, your community, your country, take the vaccine when it’s your turn and available.”

Confirmed infections and hospitalisations are steadily falling, according to The COVID Tracking Project. As of Sunday, the seven-day average of new cases is at its lowest since late October, the group found. Hospitalisations have declined for 40 consecutive days.

But figures remain high overall – more than 1,200 deaths were reported on Sunday alone, along with 56,000 hospitalisations, underscoring the urgency for rapid and widespread inoculations and relief amid the ongoing economic fallout from the crisis.

In remarks on Monday outlining the administration’s targeted expansion of a small business programme that has been a lifeline for employers, the president revived his call for the urgent passage of the American Rescue Plan, a $1.9 trillion legislative proposal for Covid-19 relief that is essential to his plan to combat the crisis, including vaccination efforts.

“The key components of the bill are addressing the crisis we’re facing,” Ms Psaki told reporters on Monday when asked if Mr Biden is willing to negotiate the cost and scope of the bill following Republican rejections. “The size of the package is a reflection of the size of the crisis.”

House Speaker Nancy Pelosi told reporters last week that she anticipates legislation will be ready for a vote in her chamber this week.

Senate Majority Leader Chuck Schumer said last week that the Senate will approve legislation and send it to the president for his signature ahead of a 14 March deadline when current unemployment benefits expire.

‘Take the vaccine’: Biden tells Americans to get Covid-19 shot as he blames ‘predecessor’ for failing to mobilise

Lady Poses as Cop, Points Faux Challans to Covid-19 Violators, Will get Caught

How the coronavirus will continue to change your life at home, at work, at school and beyond