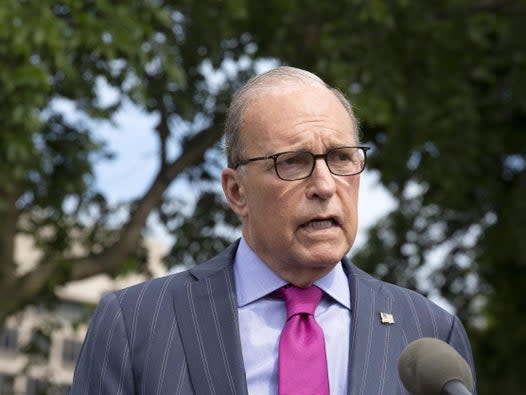 The campaign of Democratic presidential nominee Joe Biden condemned the second night of the Republican National Convention for presenting an “alternate reality” to Americans that failed to recognise the ongoing severity of the coronavirus pandemic.

Mr Biden’s deputy campaign manager and communications director, Kate Bedingfield, issued a long rebuke of the evening’s proceedings, honing in on White House economic adviser Larry Kudlow’s speech describing the Covid-19 crisis in the past tense despite the fact health officials continue to report tens of thousands of new cases per day and thousands of deaths per week.

“Not only did the American people hear no plan for overcoming the pandemic for the second consecutive night of the RNC — after more than seven months of utter mismanagement — but the president’s chief economic adviser even referred to the coronavirus in the past tense,” Ms Bedingfield said in her statement on Wednesday.

“President Trump’s RNC is an alternate reality. In this delusion, thousands of Americans didn’t die in the last week from Covid-19, nor have millions of Americans been infected or put out of work. Our economy hasn’t ground to a halt and our kids aren’t being kept home from school,” she said.

While Mr Kudlow admitted in his speech on Tuesday that the US still has “a lot of hardship and … heartbreak” to endure before the pandemic is behind us, he appeared to indicate that economic woes were retreating, and largely a thing of the past.

“It was awful. Health and economic impacts were tragic,” Mr Kudlow said of the Covid-19 pandemic.

This spring, the US government spent nearly $3trn — or roughly 13 per cent of total GDP — to buoy a health care system and flailing economy struggling to tread water during a weeks-long shutdown of business operations to slow down the new infection rate.

Republicans and Democrats failed earlier this month to reach a deal on a fifth coronavirus relief package, with Donald Trump and the Senate GOP slapping together a package worth an estimated $1.2trn that failed to garner intra-party consensus. Democrats were more united in their request for a relief bill worth upwards of $4trn.

The unemployment rate for July settled back to 10.2 per cent, down from a modern high of 14.2 per cent in April, according to the US Bureau of Labour Statistics.

Mr Trump and his administration officials have touted recent jobs-added numbers, even though those figures come nowhere close to returning the US macroeconomy to where it was before the pandemic.

In his optimistic speech about the economy at the RNC on Tuesday, Mr Kudlow, the president’s top economic adviser, continued to push for a payroll tax cut that officials have estimated would drain the Social Security fund by 2023.

Mr Kudlow also appeared to criticise Mr Biden’s plan to raise taxes on people making more than $400,000 annually. Mr Biden has proposed returning that tax rate to 39.6 per cent after Republicans reduced it to 37 per cent in their trademark 2017 tax code overhaul.

“Coming out of the deep pandemic, who in their right mind would pick the pockets of taxpayers and drain the money from their wallets and purses?” Mr Kudlow asked.

“Look, our economic choice is very clear: Do you want economic health, prosperity, opportunity and optimism, or do you want to turn back to the dark days of stagnation, recession and pessimism?” he said.

Cuba says two of its vaccines are efficient in opposition to COVID-19. However the place is the information?