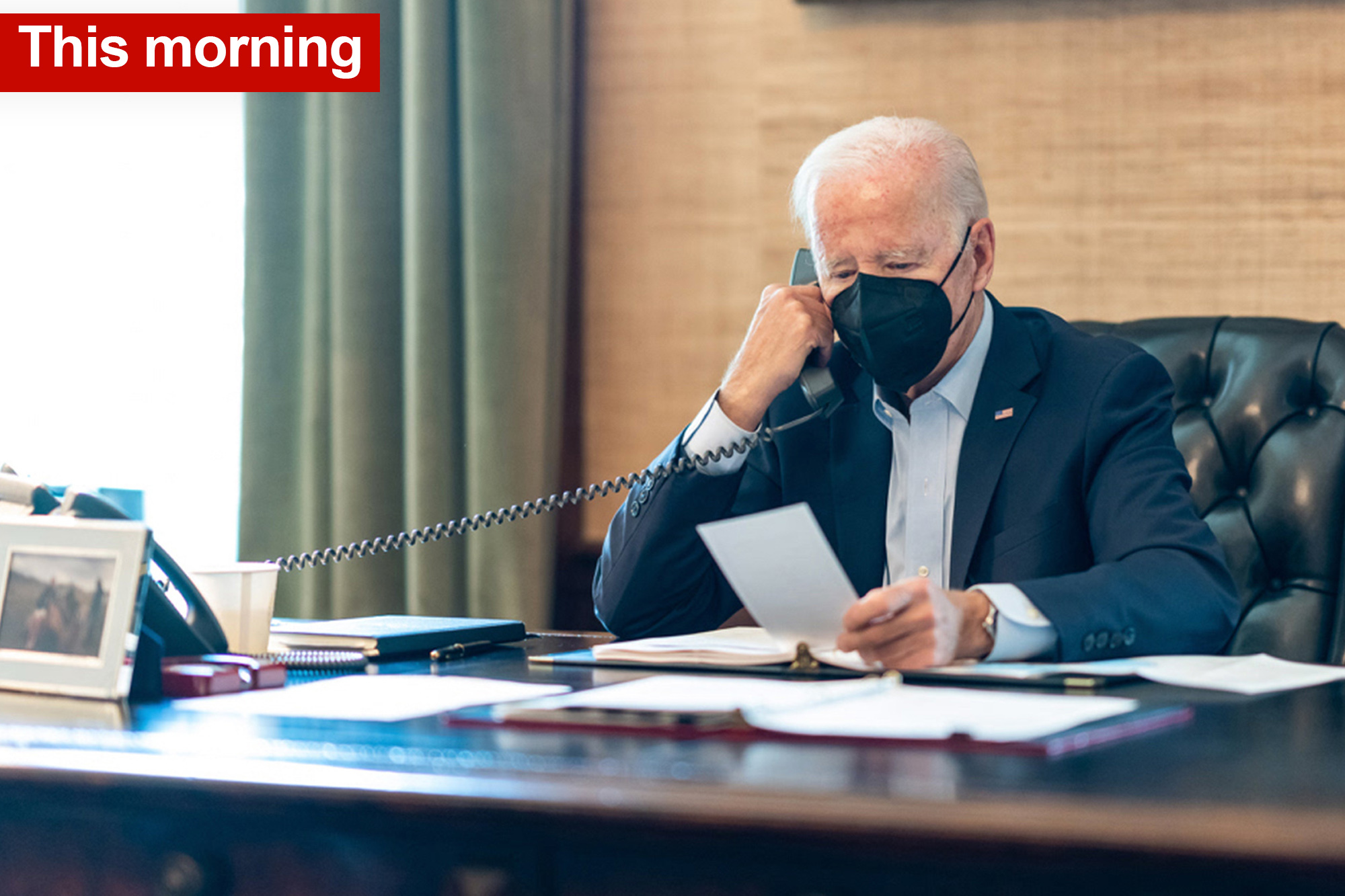 WASHINGTON — President Biden had a fever Thursday after testing positive for COVID-19, his physician Dr. Kevin O’Connor said in a Friday statement — as the White House released a photo of what it said was Biden working despite being ill.

“His symptoms have improved. He did mount a temperature yesterday evening to 99.4°F, which responded favorably to acetaminophen (Tylenol). His temperature has remained normal since then,” O’Connor said of the president in the new memo.

Biden, who turns 80 in November, is quadruple-vaccinated, which reduces his risk of serious illness, and is on a five-day regimen of antiviral drug Paxlovid. O’Connor suspended Biden’s use of two heart medications Thursday after his diagnosis.

The president’s aides have repeatedly stressed that Biden remains able to work. Around noon Friday, the White House tweeted a photo of the president wearing a suit and face mask while seated behind at a desk. In the photo, Biden held a phone receiver in one hand and a notecard in the other.

O’Connor, meanwhile, wrote in his Friday morning memo that Biden’s symptoms remain mild, despite the fact that his advanced age and history of asthma increase his risk.

O’Connor wrote that Biden is using low-dose aspirin as a temporary blood thinner after suspending his use of anticoagulant Eliquis, which is used to prevent strokes in people who have atrial fibrillation, a type of irregular heartbeat.

“The President is tolerating treatment well. We will continue Paxlovid as planned,” O’Connor wrote. “His symptoms will be treated with oral hydration, acetaminophen (Tylenol), and the albuterol inhaler that he uses as needed. His apixaban (Eliquis) and rosuvastatin (Crestor) are being held during Paxlovid treatment and for several days after his last dose. During this time, it is reasonable to add low dose aspirin as an alternative type of blood thinner.”

In a video released by the White House, President Biden says he’s “doing great” after testing positive for COVID-19. AP

O’Connor indicated that he expects Biden to recover from the virus that has killed more than 1 million Americans since March 2020.

“As I stated previously, the President is fully vaccinated and twice-boosted, so I anticipate that he will respond favorably, as most maximally protected patients do,” O’Connor wrote. “There has been nothing in the course of his illness thus far which gives me cause to alter that initial expectation. Early use of Paxlovid provides additional protection against severe disease.”

The White House said Thursday that the 79-year-old Biden is experiencing “very mild symptoms,” including a runny nose, fatigue and cough. POOL/AFP via Getty Images

Biden, who is nearing 80, is quadruple-vaccinated and has been given a round of the antiviral drug Paxlovid. AFP via Getty Images

White House reporters on Thursday clamored for O’Connor to appear in the briefing room Friday to discuss Biden’s health after press secretary Karine Jean-Pierre and White House coronavirus pandemic coordinator Dr. Ashish Jha provided secondhand and outdated information about the president’s condition. It’s unclear if he will do so.

Biden fell ill Wednesday evening after returning from a gaffe-filled speech in Massachusetts focused on global warming, before testing positive on Thursday morning.

Then-President Donald Trump caught COVID-19 in October 2020 and was hospitalized for three nights at the Walter Reed National Military Medical Center in Maryland.

Brazil is next big hot spot for coronavirus

Trump calls for 100% tariffs on Chinese language items, debt cancellation, and $10T in reparations for COVID-19