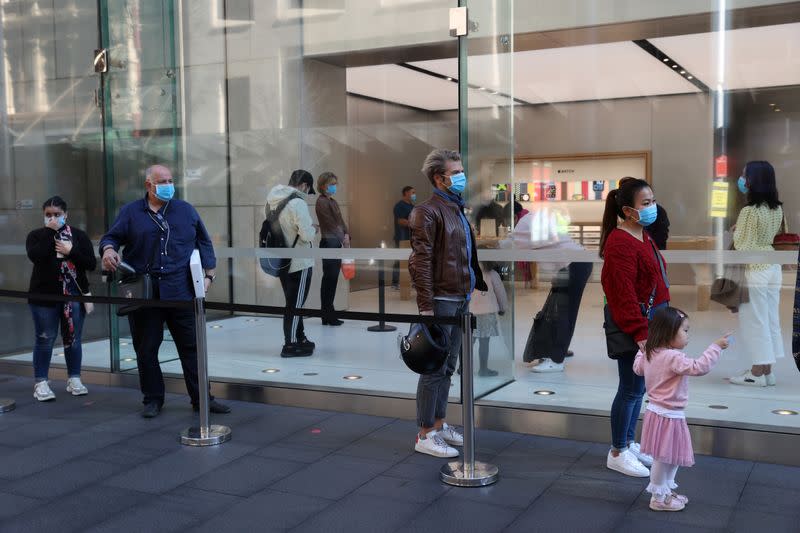 By Colin Packham and Renju Jose

SYDNEY (Reuters) – Australian officials are closing the border between Australia’s two most populous states from Tuesday for an indefinite period as they scramble to contain an outbreak of the coronavirus in the city of Melbourne.

The decision announced on Monday marks the first time the border between Victoria and New South Wales has been shut in 100 years. Officials last blocked movement between the two states in 1919 during the Spanish flu pandemic.

The state reported 127 new COVID-19 infections overnight, its biggest one-day spike since the pandemic began. It also reported one death, the first nationally in more than two weeks, taking the country’s total tally to 105.

“It is the smart call, the right call at this time, given the significant challenges we face in containing this virus,” Victoria Premier Daniel Andrews told reporters in Melbourne as he announced the border closure, effective from 11.59 p.m. local time on Tuesday.

The move will, however, likely be a blow to Australia’s economic recovery as it heads into its first recession in nearly three decades. Victoria’s only other internal border, with South Australia state, is already closed.

NSW Premier Gladys Berejiklian said there was no timetable for reopening the border, which will be patrolled by the military to prevent illegal crossings.

The state line is highly porous, with 55 roads, wilderness parks and rivers. Some businesses straddle both sides and several workers commute daily.

Lyn McKenzie, who runs a paddle steamer business along the Murray River from Mildura, a border city of 30,000 people, is waiting for more detail to gauge the full impact on her business.

McKenzie lives on the NSW side of the river, the boats pick up passengers from the Victoria side and the river itself is classified as part of NSW.

“The Mildura wharf … is where we pick people up from (but) they’ve got to cross the border technically to go on the boat,” McKenzie said by telephone. “I’m seeing this as possibly needing to shut down again, but it’s a bit early for me, not knowing the exact details.”

Berejiklian said people would be able to apply for daily permits to cross the border, but added there would be delays of around three days in issuing the passes.

“There will be aerial and other surveillance 24/7 right across the border,” Fuller told reporters in Sydney.

Australia has fared better than many countries in the coronavirus pandemic, with just short of 8,500 cases so far, but the Melbourne outbreak has raised alarm bells.

Although authorities have said the border closure will prevent the latest outbreak from spreading interstate, Melbourne locals are concerned that renewed social distancing measures have not been implemented uniformly across the city.

“Without a full Melbourne lockdown, I am not super confident this is going to be contained,” Jack Bell, a lifeguard who lives in Victorian suburb of Kensington, told Reuters.

Kensington is one of the 30 suburbs that have reimposed social distancing measures. The nine public housing blocks that have been subjected to a complete lockdown, Australia’s first, are in neighbouring North Melbourne and Flemington.

“I think people have very much forgotten about social distancing,” Bell said.

Finnish Musician Will get Covid-19 Vaccination in Full Costume

Is a flu shot secure amid the COVID-19 pandemic?