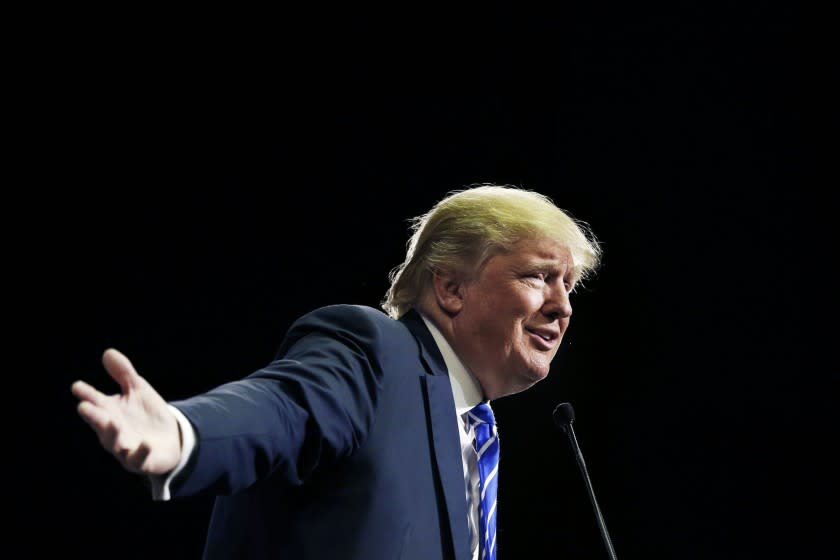 The Trump administration is pushing a new rule that would require international students to attend in-person classes or leave the country. (John Locher / Associated Press)

If there’s a cruel way to handle an immigration issue, the nation can rest assured that the Trump administration will find it.

The latest chapter in President Trump’s book, “How to Close Down a Nation to Foreigners” (and no, that’s not a real book), is a pending order that international students enrolled in U.S. colleges must attend in-person classes or leave the country. Never mind that the colleges themselves are still trying to figure out how to start the upcoming academic year as the pace of the coronavirus outbreak seems to be accelerating.

“The U.S. Department of State will not issue visas to students enrolled in schools and/or programs that are fully online for the fall semester nor will U.S. Customs and Border Protection permit these students to enter the United States.” The Department of Homeland Security said in a statement announcing the rule. “Active students currently in the United States enrolled in such programs must depart the country or take other measures, such as transferring to a school with in-person instruction to remain in lawful status. If not, they may face immigration consequences including, but not limited to, the initiation of removal proceedings.”

Colleges taking a hybrid approach must certify to the government that they are not relying solely on online courses, and if that changes during the semester they must alert the government within 10 days.

Before the pandemic the government barred international students from taking more than one online course per semester, presumably to keep people from obtaining student visas for courses that could be taken from outside the country.

The pandemic, though, forced massive campus shutdowns and shifts to online classes, leading the government to issue a temporary exemption to the one-course rule for the spring and summer sessions — which was the right thing to do.

But that will be going away for the fall, which is the wrong thing to do.

The administration has already used the pandemic to effectively shut down the asylum system, and the closing of visa processing offices here in the U.S. and overseas has significantly curtailed the granting or denial of visa applications. And new applications had already fallen off before the pandemic because of the administration’s efforts to reduce all immigration to the U.S.

In fact, the administration’s failure to process visas has threatened the viability of the U.S. Citizenship and Immigration Services itself, which by law derives its budget from visa fees and other processing charges. No visa processing, no revenue.

The agency has asked Congress for $1.2 billion in emergency cash, though the request hasn’t gained much traction as members of Congress seek more information on the issue. But without the cash infusion, U.S. Citizenship and Immigration Services says it will furlough some 13,400 employees when its current funding runs out around Aug. 3.

Telling international students they must be in class or out of the country pushes two issues important to the administration: Keeping foreigners out of the country and defying public health advisories on behaviors to mitigate the spread of the coronavirus.

In this case, the administration is telling colleges either to set aside concerns about how to conduct classes without undue risk of exposing students, faculty and employees to the coronavirus, or to sacrifice the lucrative cash flow provided by foreign students, who usually pay premium rates to attend U.S. colleges.

The administration has already moved to restrict access for students from China, part of the president’s persistent tussle over trade with the Chinese government and a further narrowing of entry doors to the U.S.

And they bring cash. Citing Commerce Department figures, the institute said international students added $45 billion to the U.S. economy in 2018.

Rather than adding yet another stressor to the economy, the administration ought to do the humane thing and extend the exemption for as long as the coronavirus is forcing such radical changes in how colleges educate students.

COVID-19 would not appear to be all over the place but. Listed here are 14 international locations that say they have not had a single coronavirus case.