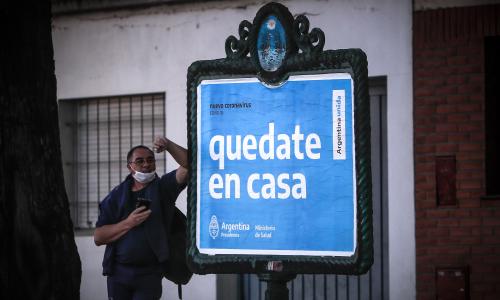 When Alberto Fernández took office as Argentina’s president in December, his inauguration was boycotted by Brazil’s hard-right leader, who dismissed Fernández and his vice-president, the two-time former president Cristina Fernández de Kirchner, as “leftwing bandits”.

For Jair Bolsonaro, Argentina’s new Peronist government represented a throwback to the “pink tide” of Latin American leaders which coincided with Fernández de Kirchner’s time in office from 2007 to 2015. “Argentina is starting to head in the direction of Venezuela,” Bolsonaro predicted.

Five months on, it is Brazil that is heading in the direction of a humanitarian emergency, amid a devastating coronavirus outbreak propelled by Bolsonaro’s dismissive attitude towards the pandemic.

The Brazilian president has downplayed the crisis as media “hysteria” and repeatedly rejected his own government’s social distancing recommendations, even as the death toll has soared.

In contrast, Argentina swiftly imposed a national lockdown, and appears to have successfully flattened the curve of contagion.

“You can recover from a drop in the GDP,” Fernández has said about his decision to implement an early lockdown. “But you can’t recover from death.”

With only 5,611 cases and 293 deaths so far, against Brazil’s nearly 136,000 cases and over 9,100 deaths, even diehard Bolsonaro supporters are now looking towards their southern neighbour with an envious eye.

The mayor of the crisis-stricken Brazilian city of Manaus, Arthur Virgílio, looked on in horror as Fernández and his deputy swept into power in December. “[They represent] everything that we deplore so much in the world today,” the 74-year-old rightwinger told the Guardian.

Now, Virgílio is looking towards Argentina in admiration. “Results are results,” the mayor said, praising Fernández for taking “the only wise choice any country can take … which is determined social isolation”.

Fifty days into its tight lockdown, Argentina feels confident enough to start relaxing social distancing rules. “We have slowed the duplication period of cases to 25 days,” the presidential cabinet chief, Santiago Cafiero, told the Guardian. “We’ve managed to flatten the curve, unlike other countries that didn’t lock down in time.”

On Friday, Fernández announced the relaxation of lockdown measures in most of Argentina except the densely populated Buenos Aires metropolitan area, where 86% of cases are concentrated.

In the rest of the country, a number of industrial and commercial activities will be reopened but public transport will only be available for essential workers and firms will have to provide private transport for their own employees.

“The duplication period is much faster in the city of Buenos Aires: only 18.8 days,” admitted Cafiero – compared to an average of 25.1 days in the rest of the country.

The rate of spread is even higher in the city’s large “villas” or slums, where it is estimated more than 250,000 people live. The worst affected is Villa 31 where some 45,000 people inhabit makeshift homes with deficient water services.

Relatives attend the burial of a family member who died from coronavirus in Rio de Janeiro. More than 9,000 people have died of the illness in Brazil. Photograph: Léo Corrêa/AP

Cases there jumped from just a handful to 219 when the “villa” was left without water for some 10 days by a water plant failure that was only resolved in recent days.

“What’s happening in Villa 31 is a tragedy,” said Ofelia Fernández, (no relation of the president), the city’s youngest legislator at 20 years old. “When a whole family is crammed in a single room, no amount of hand-washing will slow the spread. There’s no way to foresee a happy ending for Villa 31.”

All commercial activity, with the exception of grocery stores, pharmacies and supermarkets, has been frozen since 20 March, but the city could see a gradual relaxation of the lockdown starting Monday, when Argentina will enter a new phase.

Fernández is expected to announce the resumption of activities for some industries such as motor car and clothing factories starting Monday. But bars and restaurants will remain closed, except for deliveries and takeaways, as will schools, universities and entertainment venues.

The tight coordination between the central government, governors and mayors in Argentina over lockdown measures stands in sharp contrast to the battles and confrontations in Brazil where Bolsonaro sacked his health minister and clashed with regional governors.

But the differences between the two country’s experiences of the pandemic are not just down to the contrasting personalities of their presidents, said the Argentinian academic Andrés Malamud, a senior research fellow at the University of Lisbon.

Bolsonaro split with the party that brought him to power, whereas Fernández is a product of one of Latin America’s most enduring and powerful national movements.

“Fernández can rely on Argentina’s disciplined Peronist party, which has historically been on the side of the most disenfranchised, so informal workers, who make up 49% of the workforce, trust Fernández to provide solutions. Bolsonaro instead is an independent with no party to fall back on. Argentina’s governors are also dependent on the fiscal largesse of the federal government, so they fell in line quickly with the nationwide lockdown,” said Malamud.

Argentina still faces many challenges, chiefly economic: inflation is still around a yearly 50% and the renegotiation of the country’s sizable foreign debt is a race against the clock, with the possibility of a technical default soon if a current round of negotiations are not successful.

With the country’s finances obviously on his mind, Fernández on Thursday tweeted a picture of himself confirming via teleconference a $1.8bn loan from the Inter-American Development Bank.

For now at least, the president has said he plans to keep prioritizing saving lives over reviving the economy.

“I’d rather a factory was empty because its workers are in quarantine, and not because they’re ill or dead,” Fernández said.