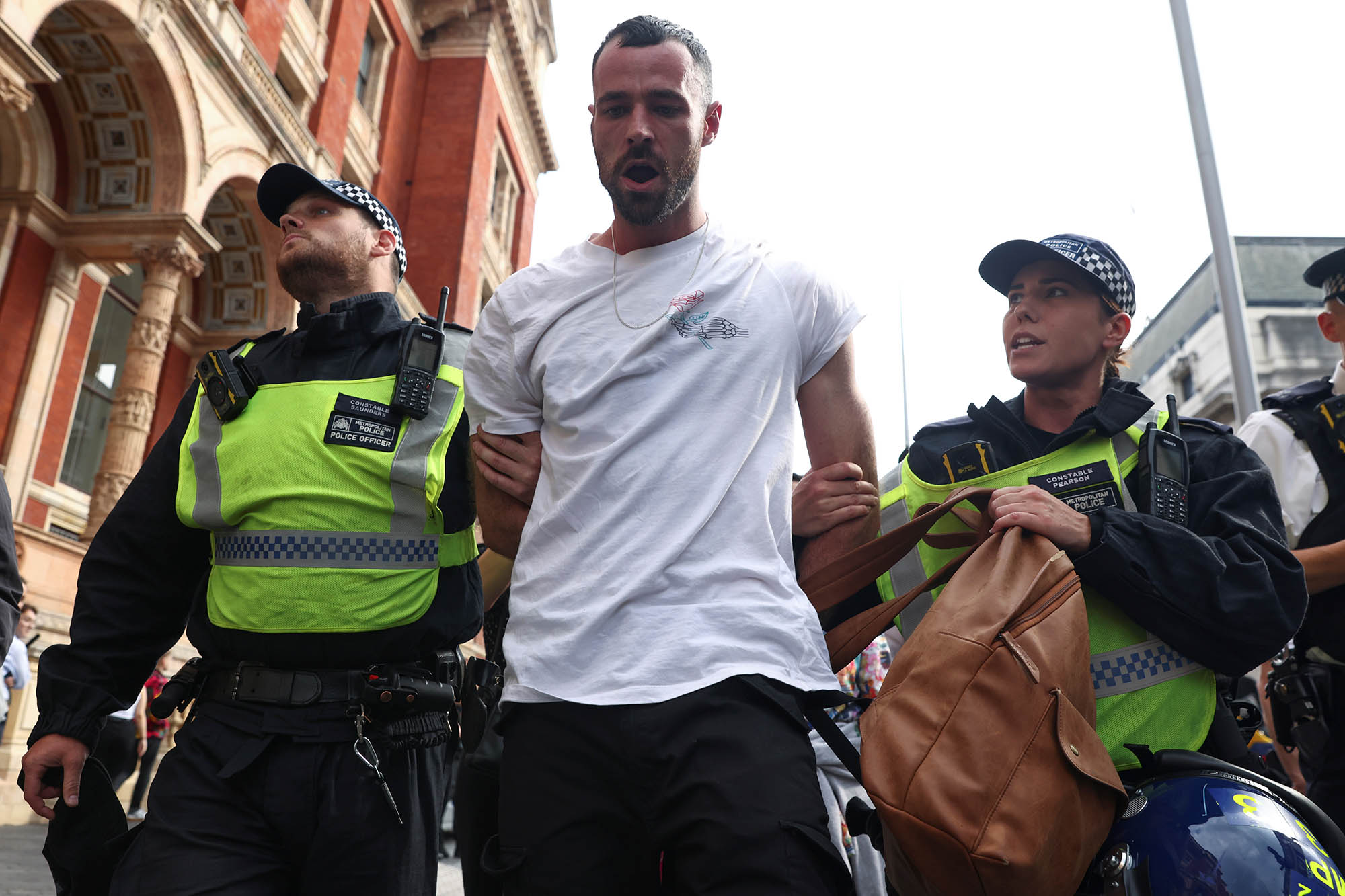 Sign up for our special edition newsletter to get a daily update on the coronavirus pandemic.

Four officers were hurt as protesters tried to storm the HQ where COVID jabs were approved.

And Our Girl star Sean Ward was pictured in handcuffs as police grappled with activists outside the Medicines and Healthcare products Regulatory Agency (MHRA) in London.

The 33-year-old is believed to have been one of hundreds of protesters who gathered outside the building in the capital.

It’s not yet known what cops have accused him of.

He shared Instagram videos of himself travelling through London this morning – less than a month after joining a demonstration at the studios where the BBC and ITV film.

It’s understood the campaigners travelled to the capital today to protest vaccinations for children.

However, officials at the Joint Committee on Vaccination and Immunization (JCVI) confirmed this afternoon that they won’t recommend jabs for healthy youngsters aged 12 to 15.

The cops were trying to shove the pack backwards as they were pushed towards the doors of the building.

One man in a hat was captured grabbing the handle of the door and trying to wrench it open.

Some of the crowd were later involved in another row outside the Science Museum vaccination centre in Kensington, West London.

Videos showed protesters being struck by cops after officers attempted to block people leaving a nearby tube station.

It comes less than a fortnight after anti-vaxx campaigners stormed the headquarters of ITN and verbally abused veteran newsreader Jon Snow.

Police said today: “We have officers attending a demonstration outside a commercial building on Cabot Square in Canary Wharf.

A woman carrying a baby argues with the police as she takes part in an anti-vaccination protest.Chris J Ratcliffe/Getty Images

“A number of officers are on scene, guarding the entrance to the building.

“Officers also continue to attend a demonstration by separate group in Canary Wharf along Bank Street.

“Arrests have been made and units remain on scene.”

They later confirmed some PCs were hurt.

“A number of protesters have become violent towards police,” they said.

“Four of our officers have been injured during clashes. This is unacceptable.

The JCVI has been weighing up whether to inoculate kids against coronavirus or not.

It was understood the green light may be given to jab youngsters aged 12 to 15 at school.

NHS England had confirmed it’s already hiring vaccinators to go into classrooms and vaccinate youngsters in the age group.

Meanwhile, The Department of Health and Social Care (DHSC) said it needs to be prepared in case approval was handed down.

But today, officials said they won’t recommend vaccinations for pupils.

That decision will face a review by the UK’s four chief medical officers before a final judgement is made.

It seems likely that the verdict came as a shock to the Government.

Just a week ago, DHSC appeared to hint approval for vaccinating children would be given.

A spokesperson said: “If the JCVI recommends that 12- to 15-year-olds should be offered the vaccine, we need to be ready to hit the ground running and start those vaccinations as soon as possible.

“That is what parents across the country would rightly expect us to do, to keep their children safe.

“That is why the Government has asked the NHS to undertake the necessary preparations to ensure they are ready to offer universal vaccination to 12 to 15-year-olds from early September.”

The Moderna COVID jab was given the ok for kids aged between 12 and 17 in the UK.

Pfizer is has also been approved for anyone over 12.

Health Secretary Sajid Javid said the Government has “planned ahead” during the pandemic so it can “respond to changing circumstances and move quickly.”

Meanwhile, Sage says Brits must brace for a spike in cases now pupils are back in class.

Experts have predicted a “high prevalence” of the virus in schools by the end of the month.

The overall risk of a child becoming severely ill or dying from COVID is extremely low.

In the first year of the pandemic, 25 under-18s died of the virus, while 251 were admitted to ICUs in England.

The Joint Committee on Vaccination and Immunization said they won’t recommend the COVID-19 vaccine for healthy children, however.London News Pictures

Meanwhile, all teachers and parents will have been offered the jab, with 42.3 million second doses doled out to adults in the UK so far.

However, experts on the Scientific Pandemic Influenza Group on Modelling — or SPI-M — say Boris Johnson must now plan for a jump in cases.

What’s ‘Illness X’? Deadlier Than Covid-19, Ebola and Might Turn out to be the Subsequent Pandemic