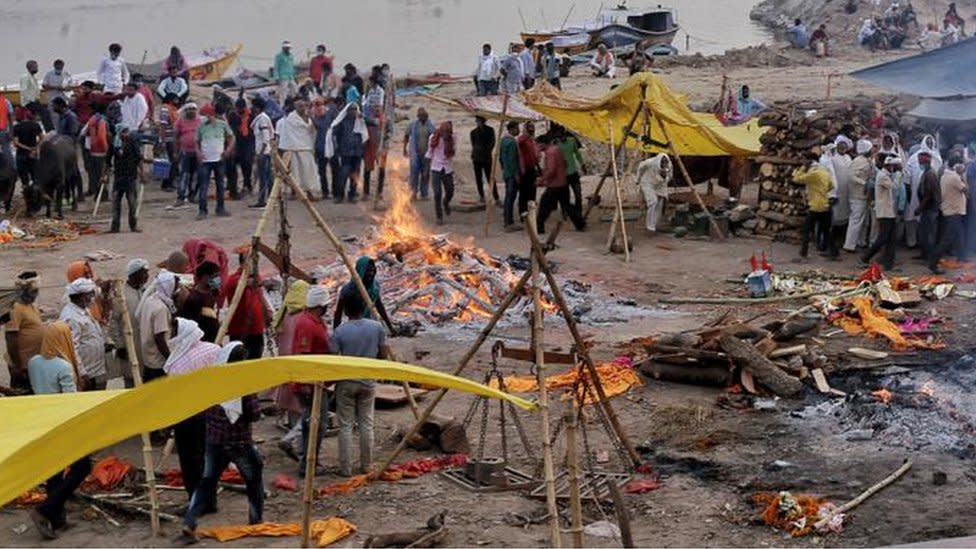 Funeral pyres have been burning non-stop in Varanasi

The region around Varanasi, one of the holiest cities in the world for Hindus, is among the worst affected by the second wave of coronavirus sweeping India.

Many angry citizens of the region, in the northern state of Uttar Pradesh, are now asking where their MP, Narendra Modi – India’s prime minister – is in their hour of need.

India’s devastating second wave has pushed the country’s total number of infections to 20 million and the death toll to more than 220,000. In Varanasi, with the health infrastructure swamped, patients can no longer find hospital beds, oxygen, or ambulances, and getting a Covid test can take up to a week. In the past 10 days, most pharmacies have run out of basic medicines like vitamins, zinc and paracetamol.

“We are inundated with calls saying help us get a bed or oxygen,” said a local medical professional, who did not want to be named. “With the most basic medicines in short supply, people are even taking expired drugs,” he said. “They say it’s a little less effective, but at least it’s something.”

What caused the virus spread?

City residents say the first signs of trouble became visible in March. As cases spiked in Delhi and Mumbai and authorities there began imposing restrictions, migrant workers began returning home to their villages in and around Varanasi on overcrowded trains, buses and trucks.

Many came home for the Holi festival on 29 March or to vote in the village council elections on 18 April – held against advice from experts. Reports say more than 700 teachers on poll duty died in the state and the elections helped spread the virus.

Varanasi’s hospitals were soon overwhelmed and people left to fend for themselves. Rishabh Jain, a 25-year-old businessman based in the city, told the BBC that when his 55-year-old aunt fell sick he had to drive 19 miles (30km) every day to queue for up to five hours to refill an oxygen cylinder.

“We panicked when her oxygen levels fell below 80,” he said. “We couldn’t find a hospital bed so the family started phone bashing to find an oxygen cylinder. We tried 25 numbers for 12 to 13 hours and finally with help from social media and the district administration, we managed to get a cylinder. She’s recovering now.”

Migrant workers have returned to their villages from Mumbai and Delhi in overcrowded trains, buses and trucks in recent weeks

Alarmed by the situation, the Allahabad high court on 19 April ordered a week’s lockdown in Varanasi and four other cities in the state, saying the pandemic had “virtually incapacitated our medical infrastructure”. The state refused to enforce it and challenged the order in the Supreme Court, arguing it had to “protect both lives and livelihoods”.

Critics now say the government has failed to do either. With the district administration imposing intermittent weekend curfews and with most businesses and shops shut from fear, thousands are losing their livelihoods and the virus is still spreading.

The question over numbers

Varanasi has so far recorded 70,612 infections and 690 deaths. But 46,280 – or 65% – cases were recorded since 1 April. The official Covid death toll for the district hovers most days around 10-11. On Sunday, the government data put it at 16. But everyone I spoke to in Varanasi dismissed these numbers as a fiction.

A long-time city resident, who lives close to the Harishchandra and Manikarnika ghats – the two main cremation areas on the banks of Ganges river – says funeral pyres have been burning non-stop for the past month.

Earlier, the two locations between them would have 80-90 cremations a day, but for the past month, the resident said, he believed the number has risen to roughly 300-400 a day.

“How do you explain this increase?” he asked. “These people are also dying of something? Most reports say they had a cardiopulmonary failure. How are so many people, including young healthy individuals, suddenly dying from a heart attack?”

A recent video shared by a Varanasi resident showed corpses lined up on either side of a narrow lane leading up to the cremation ground, stretching up to a kilometre. The authorities opened two new cremation grounds about 10 days ago, but reports say they are operating around the clock.

The virus spreads to villages

The tragedy has not stopped at the city of Varanasi: the second wave has made deep inroads into smaller towns and remote villages in the state. Sudhir Singh Pappu, chief of Chiraigaon block, a cluster of 110 villages with a population of 230,000 on the outskirts of Varanasi, told the BBC that each village had reported five to 10 deaths in recent days. In some villages, he said, the toll was as high as 15 to 30.

Kamal Kant Pandey, a resident of Aidhe village, said he thought the situation in his village was worse than in the city. “If you tested everyone in my village of 2,700 people, at least half would be positive. So many people have cough, fever, pain in the lower back, weakness, loss of taste and smell,” he said.

Deaths in Aidhe were not making it onto the official database because “there’s no testing here”, said Mr Pandey, who was himself sick with the virus but made a full recovery.

“Imagine, this is the prime minister’s constituency and even then we are gasping for breath,” he said.

‘Modi is in hiding’

Mr Modi has often talked about his “special bond” with the river Ganges, the ancient city of Varanasi, and the city’s people. But as the virus has ravaged the city and the medical infrastructure collapsed, Mr Modi has stayed clear of his constituency.

Residents have watched as their MP made 17 trips to the key political state of West Bengal between February and April, to campaign for the assembly elections there, which he lost badly on the weekend.

An angry restaurant owner described Mr Modi’s review meeting to discuss the Covid crisis in Varanasi on 17 April – a day before the village council elections – as a “farce”.

“The prime minister and the chief minister have gone into hiding, abandoning Varanasi and its people to their own fate,” the restaurant owner said. “The local BJP leaders are in hiding too. They have switched off their phones. This is the time people need them to help with a hospital bed or an oxygen cylinder but it’s total anarchy here. People are so angry.”

Mr Modi has been an MP from Varanasi since 2014

The blame “lies with no-one else but the prime minister”, said Congress politician Gaurav Kapoor. “The buck stops with him. The blame for every single death in the past month and a half in Varanasi – and in India – lies at his doorstep” Mr Kapoor said.

Like many city residents, Mr Kapoor too has suffered personally – he lost an aunt and an uncle a fortnight back to Covid and a friend’s brother is now battling for life in a hospital. When I called him for the interview on Friday, he was isolating in a room at home, infected with coronavirus.

He said when the numbers first began rising, he was inundated with calls seeking help in finding a hospital bed or an ambulance.

“But people have realised that it’s pointless. The calls now are for oxygen cylinders,” he said.

The situation, by all accounts, is likely to get worse before it gets better. Varanasi is in chaos, and the picture on the outskirts and in the rural areas, where supplies are even more scarce, is worse.

“Doctors there tell me they don’t even have oximeters, so patients are dying in their sleep when their oxygen levels plummet,” said the owner of a diagnostic centre in Varanasi.

“When my wife and child were infected, I called our doctor and did everything he advised. But what about the illiterate man in the village who has no doctor on his speed dial? You know how he lives? He lives by God’s mercy.”

Gov. Ron DeSantis brags about Florida’s dealing with of coronavirus