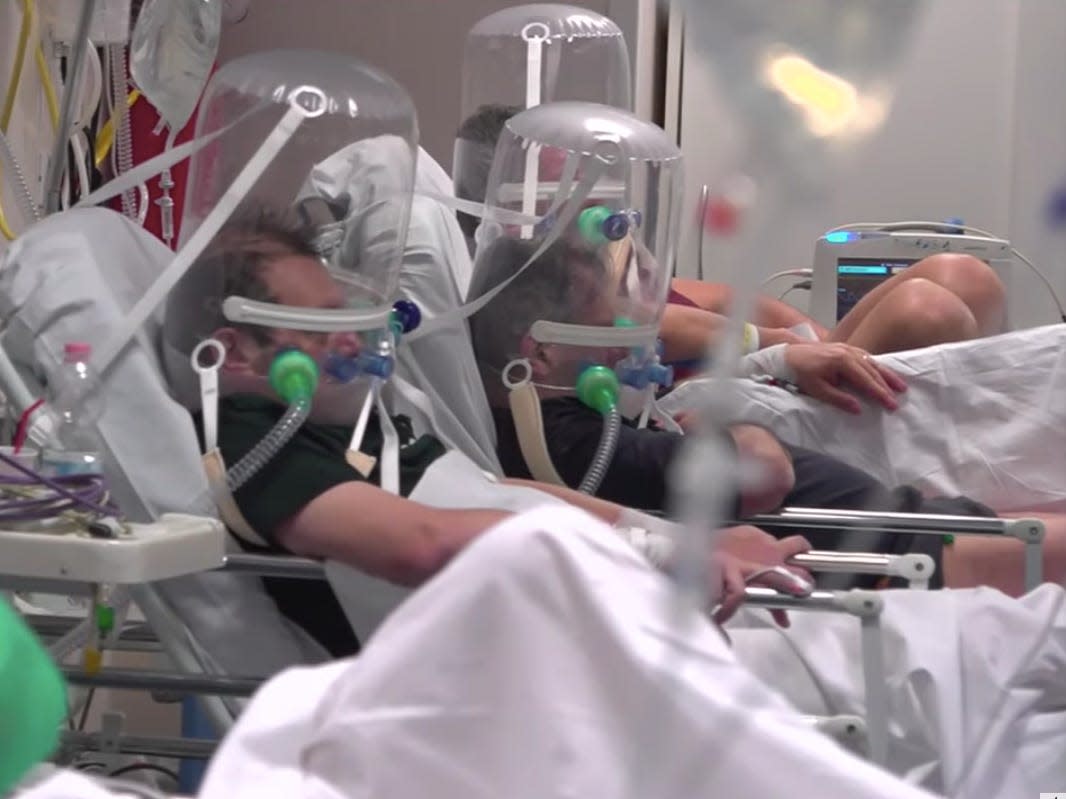 A still from footage inside a hospital in Bergamo, Italy, broadcast by Sky News on March 18, 2020.

The head of ICU at a hospital in Bergamo, northern Italy, said many patients there who were treated for COVID-19 now have serious long-term health issues.

Bergamo was the worst-hit area in Italy’s worst-hit region, Lombardy. Some 3,000 people died in Bergamo, with the Papa Giovanni XXIII hospital in the thick of it.

In March, images from a shocking Sky News report from inside the overwhelmed ICU were seen around the world.

Dr Roberto Cosentini, the head of the ICU, told Sky News this week that “a significant proportion of the population” have “chronic damage from the virus” after recovery.

He did not specify how many were affected. Several studies have noted problems in patients who had COVID-19, but have yet to reach firm conclusions.

Cosentini said it’s clear the virus affects a number of organs, including the kidneys and the brain, not just the lungs.

The head of intensive care at a hospital in Northern Italy that was in the center of the country’s outbreak says COVID-19 patients there have been left with serious health issues that may never go away.

Dr Roberto Cosentini, the head of the emergency department at Papa Giovanni XXIII Hospital in Bergamo, Lombardy, told Sky News “we see a significant proportion of the population with chronic damage from the virus.”

Cosentini did not specify how large the proportion was. Scientific studies have noted an array of serious conditions in post-coronavirus patients, but have yet to definitively how widespread they are.

Scenes from Papa Giovanni XXIII in mid-March travelled round the world after a shocking video from its overwhelmed ICU was broadcast by Sky.

At the time, Bergamo was the first badly-hit area in Europe, and the images of the outbreak were a shocking insight into how bad the pandemic could get.

At one point, the Italian military arrived to ferry bodies to nearby provinces because morgues in Bergamo were overflowing. Victims were temporarily stored in churches or sealed off in the bedrooms in which they died.

A view of the Cemetery of Bergamo during a memorial service for COVID-19 victims on June 28, 2020 in Bergamo, Italy.

“But subsequently we discovered that it is a systemic illness with vessel damage in the whole body with renal involvement, cerebral involvement.”

The long-term health effects of the coronavirus are not known for certain, but several trends are emerging.

Respiratory problems are regularly observed, which can include acute respiratory distress syndrome (ARDS) asthma, and what some doctors call “post-COVID lung disease.”

Issues with the gut, heart, and kidneys are also common after recovery. Experts are also wary of effects on the mental health of severly ill patients.

The ICU at the Papa Giovanni XXIII hospital said on July 8 that it finally had zero COVID-19 patients, more than four months after it received its first patient on February 23.

Bergamo is the worst-hit province in the Lombardy region, which is itself Italy’s worst-hit.

Coffins arriving from the Bergamo area being unloaded from a military truck that transported them to a cemetery near Milan, Italy, on March 27, 2020.

Authorities in Bergamo said on June 8 that a study had shown that more than 50% of people tested in the province have COVID-19 antibodies, according to Reuters.

Prosecutors in the province are currently investigating allegations of mistreatment, neglect, and wrongdoing by healthcare professionals, brought by the families of the dead.

150 complaints detailing how their relatives were mistreated have been submitted so far, according to The Associated Press.

And Italian health authorities are warning of a second wave.

“Although the lockdown measures made it possible to effectively control SARS-CoV-2 infection, widespread transmission of the virus persists when favorable conditions occur, causing outbreaks, including some of a significant size,” the Health Ministry said on Monday, according to the ANSA news agency.

“New cases of infection were diagnosed in almost all of the regions and autonomous provinces during the week of monitoring from June 29 to July 5, with an increase in cases with respect to the previous week in some areas.”