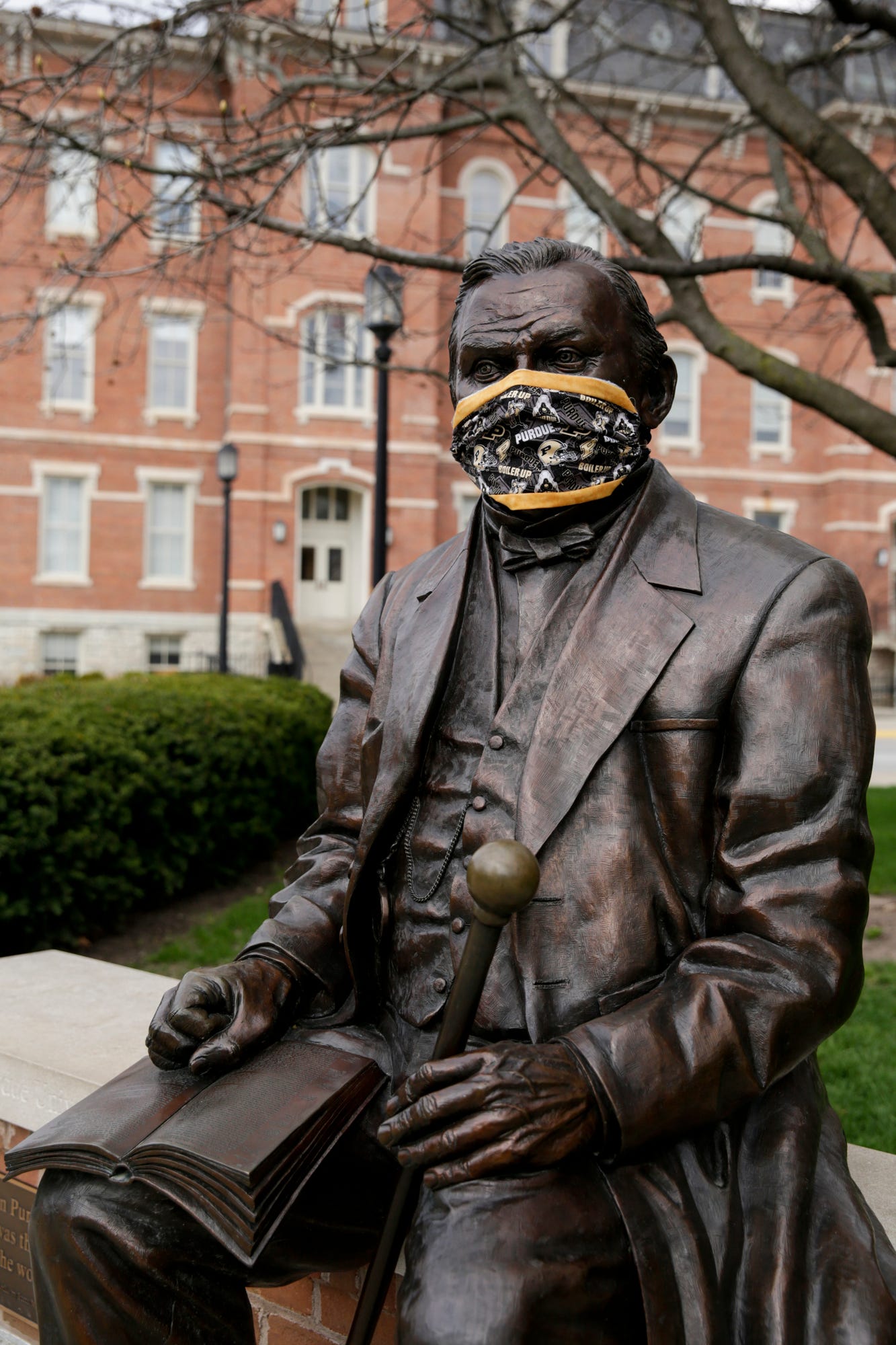 First, coronavirus canceled spring break. Then it was graduation. College Decision Day, an already decaying tradition of declaring one’s intent to attend a particular school, may be next.

Many colleges, desperate for tuition money during the pandemic, have rolled back the traditional May 1 deadline to June 1. That allows families to weigh new financial concerns and get a sense of how the nation is recovering from the virus.

Amid economic uncertainty and stunning job losses, some colleges are likely to welcome students of varying qualifications no matter when they decide to commit. Which means it will take months for colleges to know who their students will be, and whether the schools will be able to make ends meet on the tuition revenue they’ll get.

In fact, some colleges may not know for certain until they see who shows up on campus or logs on for their first online class.

The Bowdoin College campus is nearly empty during spring break, Wednesday, March 11, 2020, in Brunswick, Maine. Many campuses have sent students home for the spring semester. May 1 is when many incoming first-year students commit for the fall semester.

College upended: Colleges scrambled to react to the coronavirus. Now their very existence is in jeopardy

Roughly 11% of students surveyed by the Strada Education Network said they had canceled their education plans since the coronavirus outbreak. Those who do plan to further their education are considering certificate programs or courses related to in-demand jobs instead of traditional degrees, according to the education nonprofit’s ongoing poll of more than 5,000 people.

In another survey, which was administered last week, 40% of prospective students had yet to submit a deposit to any college. That’s significantly larger than expected at this time of year, said Craig Goebel, a principal the Art & Science Group, a higher education consulting firm, which surveyed 1,171 students.

Plus, about 12% of those who had put down a deposit, telling colleges “yes,” had said they had since changed their mind about attending a four-year college.

A major reason for students’ uncertainty about college: About half say their family members’ employment status changed as a result of the pandemic, according to the Arts & Science Group’s survey. (A recently released NPR/PBS NewsHour/Marist poll also found that 50% of Americans had personally been financially impacted by the coronavirus.)

Jordynn Collie knows that reality firsthand. Since she was eighth grade, Collie, 17, had wanted to attend Pennsylvania State University. She told USA TODAY she was excited about the university’s alumni network and the chance to do undergraduate research.

The university had accepted her, and she was ready to attend. Then the coronavirus outbreak happened.

Her mom was put on furlough back in March, and she won’t be able to return to work until July. Even then, it’s expected to be for reduced pay.

Out-of-state tuition is no longer an option for Collie. She is now looking at Virginia Commonwealth University or the nearby community college, Northern Virginia Community College.

“For me to go to college now, I just need to make sure it’s affordable,” she said.

Will students go to college at all? Community colleges offer a hint. It isn’t pretty.

Enrollment a mystery until move-in weekend?

This year, a student’s deposit was already less of an assurance she or he would attend that college. That’s partially due to an antitrust investigation by the Department of Justice into a trade group that governs ethical admissions practices among colleges. The gist of the government settlement with the National Association of College Admissions Counseling: Colleges are now allowed to recruit students from universities they had already committed to.

“Universities are aware a lot of them aren’t going to find out whether a student is planning to attend post-deposit until they show up at school or have to make their first tuition payment,” Goebel said.

Enrollment deposits tend to be a few hundred dollars. Losing a deposit to change your mind about your school doesn’t matter much when tens of thousands of dollars in tuition and room and board are on the line.

Students who have yet to make a deposit, Goebel said, tend to express more doubt about campuses being open in the fall. They have lower ACT or SAT test scores, their families earn less, and they’re more likely to be first-generation students.

Those who do put down a deposit likely expect to pay less if the coronavirus forces classes online again. About 70% of students would expect to pay less for a semester of digital classes than what they would for one of face-to-face classes, according to the Art & Science poll. (College officials have said it has actually cost them more money to pivot to online classes without much warning while still paying the wages of faculty members.)

Even if campuses reopen, colleges may take an extra financial hit. To Goebel and others, it’s clear colleges will have to provide some incentive, likely financial, to entice students to return back to campus amid a pandemic and a recession. That may mean lowering tuition rates or offering more financial aid.

Davidson College, a highly selective private institution in North Carolina, announced last month that all its students would be able to defer their payment for the fall semester until July 2021. Lee College, a community college in Texas, offered to waive tuition for the summer semester for local high schoolers and returning students. And Franciscan University, a private Catholic college in Ohio, said it would cover the tuition of its students for the fall after scholarships and grants had been applied.

About a month ago, Sai Sagireddy, an 18-year-old in Trinidad and Tobago, posted on Reddit about his hope that colleges would widely push back on the May 1 decision day.

But of the two universities he had been considering, Baylor University and George Washington, only Baylor extended its deadline. (George Washington did say it would work “with admitted students on a case-by-case basis.”)

George Washington University’s medical school on March 12, as students prepared to leave campus for spring break. Classes went online after the break and have not resumed in person.

A delayed deadline to choose a college, Sagireddy told USA TODAY, would have given him some time potentially to visit campuses over the summer. And it might have meant, he said, an opportunity to further negotiate with financial aid departments. (One college, Sagireddy said, didn’t respond to him for two weeks until he called and followed up with them.)

Instead, he’ll have to choose his future campus sight unseen. He said he is especially regretting taking a gap year after finishing his high school studies. Had he know coronavirus would be a concern, he would have started college immediately.

Foreign students: They may not return to the U.S. at all this fall. That’s bad news for colleges

At least two online petitions popped up in mid-March urging universities to reconsider their deadlines. The creator of one of those petitions, 18-year-old Charlie Lockyer, said his hope was to give students more time to make a monumental decision.

He has since made up his mind about college — he plans to attend Rice. But he said it would have been helpful to visit a few more campuses. His biggest concern now, he said, is if classes will be in-person during the fall. If they’re online, he plans to take a gap year.

“I can’t justify spending that much money to sit in my basement doing assignments on my computer,” he said.

New students and their parents walk outside Lovett Hall during an orientation tour on the campus of Rice University in Houston in this 2009 file photo. Mainstays like orientation are in doubt as colleges across the country try to figure out if it is safe to have in-person classes this fall.’A bajillion-and-a-half caveats’

Another challenge has muddied the decision process for college-bound students and their parents. While universities were mostly aligned in their response to the coronavirus in the spring, they may take different paths on whether to reopen campuses this fall.

So far, said Chris Marsicano, a visiting education professor at Davidson, colleges have had  a uniform response despite differences in institutions’ size.

“Uncertainty breeds imitation,” he said. “When it’s unclear how to respond to a particular crisis, institutions that spend a lot of time with each other will look to each other for guidance.”

Now as the months drag on, and some states appear to be lifting social distancing orders, higher education institutions are already splitting on what their response should be.

Some, like Purdue University, have drawn attention for their attempts to restart the fall semester with as little interruption as possible. Others, like San Jose State, are already planning for another semester of online classes, ditching some hallmarks of a university education like lecture halls crammed with hundreds of students.

A statue of John Purdue, the founder of Purdue University, was wearing a mask on April 7 in West Lafayette, Indiana.

Marsicano, though, urged caution in judging universities’ current plans. For some institutions, he said, making an announcement they plan to be open in the fall could be a way to shore up the incoming class. Some that hadn’t pushed back that May 1 deadline, he said, may later do so. And even those suggesting they’ll have to resort to online-only courses can’t be sure what’s going to happen.

Colleges’ announcements about their plans have included “a bajillion-and-a-half caveats,” he said.

Even though there is more uncertainty for what the fall semester will bring, some colleges are already starting to follow each other’s examples.

Beloit College, for example, announced last month it would offer shorter but more intense classes in an effort to be more flexible in switching from online to face-to-face classes if need be.

By April 20, Centre College had announced similar block scheduling. And after Purdue announced its plans to reopen, several large public university systems, including the University of North Carolina system, the University of Texas system and Texas A&M made similar comments about their campuses reopening in the fall, albeit while recognizing factors like coronavirus outbreaks, a lack of testing and local government restrictions may limit their ability to operate normally. They have also suggested classes might be smaller or the dorms might be more sparsely populated.

So what should families and students do in these uncertain times? Marsicano suggested that they continue to apply for the school they think is best for them, regardless of the pandemic.

“Once you’re in the door at the place you want to be, it becomes a lot harder to leave,” he said.

Largest firefighting aircraft could also be offered for COVID-19 response