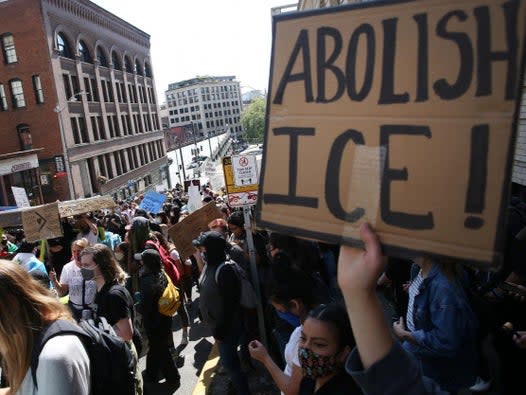 Nearly 1000 employees of companies contracted to run immigration detention centres in the US have tested positive for coronavirus.

According to congressional testimony given by company executives, over 930 people employed by private contractors that run immigration detention centres have tested positive for the disease as of Monday.

Immigration and Customs Enforcement (ICE) has reported 45 cases of Covid-19 among direct staff at detention facilities, however, a large proportion of the employees working at privately run centres are employed by private contractors.

Four companies that detain immigrants on contract with ICE including: CoreCivic, The GEO Group, Management & Training Corp, and LaSalle Corrections, have reported at least 930 infections in total between them, in response to questions from lawmakers.

More than 3,000 immigrants in ICE custody have tested positive for Covid-19 at the agency’s centres across the country since the outbreak began, leading to the deaths of two people who were detained.

The news comes after last month almost 200 pages of handwritten letters from illegal immigrants held in US federal detention centre in South Florida were made public, detailing the alleged living conditions of the detainees during the pandemic.

“We may die and are afraid,” their collective note said, according to The Miami Herald.

“We were served spoiled food, we’re starving, bathrooms are bad, violations of rights… beds are two feet apart and not six feet apart,” they wrote.

The note, dated 16 April, pleaded with magistrate Jonathan Goodman to help them immediately or send investigators. The letters were part of a three-month lawsuit of about 100 detainees seeking release from the centre.

ICE told the court it was aware of claims detainees who test positive for coronavirus are mixed in with the untested, plus allegations of a lack of masks, no social distancing, inadequate soap, and hand sanitiser, according to The Herald’s report.

A 22-page submission by ICE reportedly said there were currently no detainees being quarantined and that the agency follows all federal guidelines. They noted that they had moved to acquire funding for more sanitising and cleaning supplies, while developing systems for social distancing, mask distribution and pandemic educational materials.

An earlier statement from ICE to The Independent on the letters said: “Since there is pending litigation on this subject, ICE cannot provide further comment. That said, lack of comment should not be construed as agreement with or stipulation to any of the allegations.”

There are currently nearly 22,580 detainees in ICE custody, a significant decrease from the average 50,000 people detained daily during the 2019 fiscal year.

11 of the biggest myths about coronavirus, according to WHO

Who is affected by Trump’s immigration executive order and how

ICE detainee letters made public: ‘We may die and are afraid’

Over 70 percent of inmates in federal prisons have COVID-19