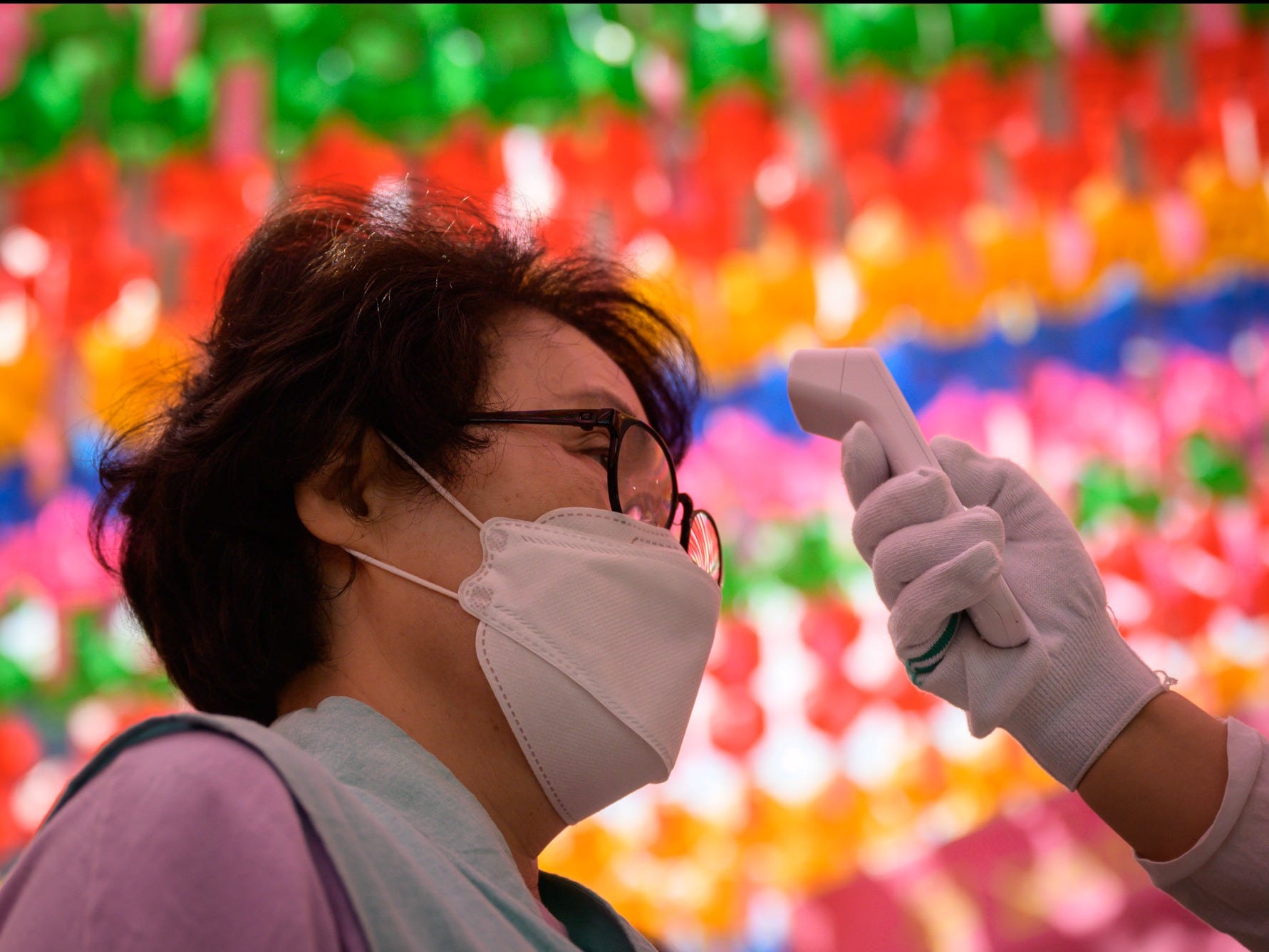 South Korean worshippers at the Jogye Buddhist temple in Seoul on April 30.

After some infected partygoers spread the virus in several Seoul nightclubs in early May, South Korea saw another flare-up.

The country was able to quickly control that second outbreak by finding more than 45,000 people connected to those nightclubs and testing and quarantining them.

South Korea’s guide to flattening the curve describes how it uses text alerts and smartphone apps to perform contact tracing and share information with the public.

South Korea’s exemplary coronavirus control measures were put to the test this month.

After the country relaxed its social distancing as the number of new daily cases dropped into the single digits, several people who visited nightclubs in Seoul tested positive for the virus.

The partiers had been out in the city’s Itaewon entertainment district during the first weekend of May, after which dozens of new COVID-19 cases started to get reported each day. Given the thousands of Koreans who had been at clubs that weekend, South Korea was staring down an infection cluster that threatened to catalyze another nationwide outbreak.

The country’s response is a how-to in contact tracing. Seoul’s mayor shut down all bars and nightclubs in the city. Within two weeks, South Korean officials had tracked down 46,000 people who had contact with known infected partygoers and tested them for COVID-19.

More than 160 people tested positive and were isolated and treated accordingly. By May 18, the country’s new daily domestic cases had dropped back to nine.

South Korea attributes its coronavirus success to its use of information and communications technology, which enables authorities to perform contact tracing, disseminate information about the outbreak, and test widely.

To wrangle the nightclub-linked outbreak, officials tried to get in touch with every single person who’d visited any of the clubs where the infected people went. That was possible because bars and nightclubs in Seoul required partygoers leave their names and contact information before entering, Time reported.

But not all of them left accurate or complete information, so police worked with telecommunications companies to use cellphone data to confirm who was in Itaewon that weekend.

According to Seoul’s mayor, officials were able to get in touch with about half of nightclub visitors by May 10.

It doesn’t stop there: After a clear picture of where an infected person went is established, the South Korean government then publishes that anonymized information on a public website so others can check to see if they have been exposed.

Unlike China and the US, South Korea never implemented large-scale lockdowns, though it did shut down schools and impose a curfew in some cities.

According to a South Korean government report called “Flattening the curve on COVID-19: The Korean Experience,” more restrictive measures weren’t needed because the government could easily alert people about whether they’ve come near someone who tested positive.

Officials in the country are constantly updating national and local government websites that track the numbers of cases and residents tested. That way, they can communicate to the public how many people are infected in each geographic area in real time. Then smartphone apps send people emergency text alerts about spikes in infections in their local region.

One app sounds an alarm when users get within 100 meters of a place that someone with a confirmed coronavirus diagnosis recently visited. Another helps employees plot the safest routes to and from work that don’t intersect with the previous paths of infected people.

After the nightclub outbreak, the government sent out phone alerts asking anyone who had been in or near Itaewon clubs between April 30 and May 5 to get tested, even if they didn’t have any symptoms.

The tests were free.

Seoul’s branch of the Shincheonji Church of Jesus on March 1.

If a resident tests positive or is suspected of coming into contact with an infected person, the government then encourages them to download self-quarantining apps that help users monitor their condition. The apps can connect them to a doctor if needed, and they also set off an alarm if the sick user ventures outside their designated quarantine area.

South Korea reported its first coronavirus case on January 20 — the same day the US did.

At first, case numbers remained low. But in mid-February, a 61-year-old woman attended church services in Daegu. Soon after, she tested positive for the coronavirus, then so did dozens of others. South Korea’s coronavirus case count quickly jumped from 29 cases on February 15 to more than 2,900 two weeks later.

South Korean soldiers on a street in front of Daegu’s city hall after a rapid rise in cases of the coronavirus on March 2.

But the country quickly implemented large-scale coronavirus testing, which helped health officials find and notify potentially infected people. By March 17, more than 270,000 Koreans had been tested, in large part at drive-thru and walk-through facilities. They received their results in less than a day.

Starting March 1, the number of new daily cases shrank day after day as infected people were quarantined and their contacts were appropriately isolated.

By mid-March, South Korea’s epidemic curve had flattened. To date, it has reported about 11,200 coronavirus cases and 264 deaths.