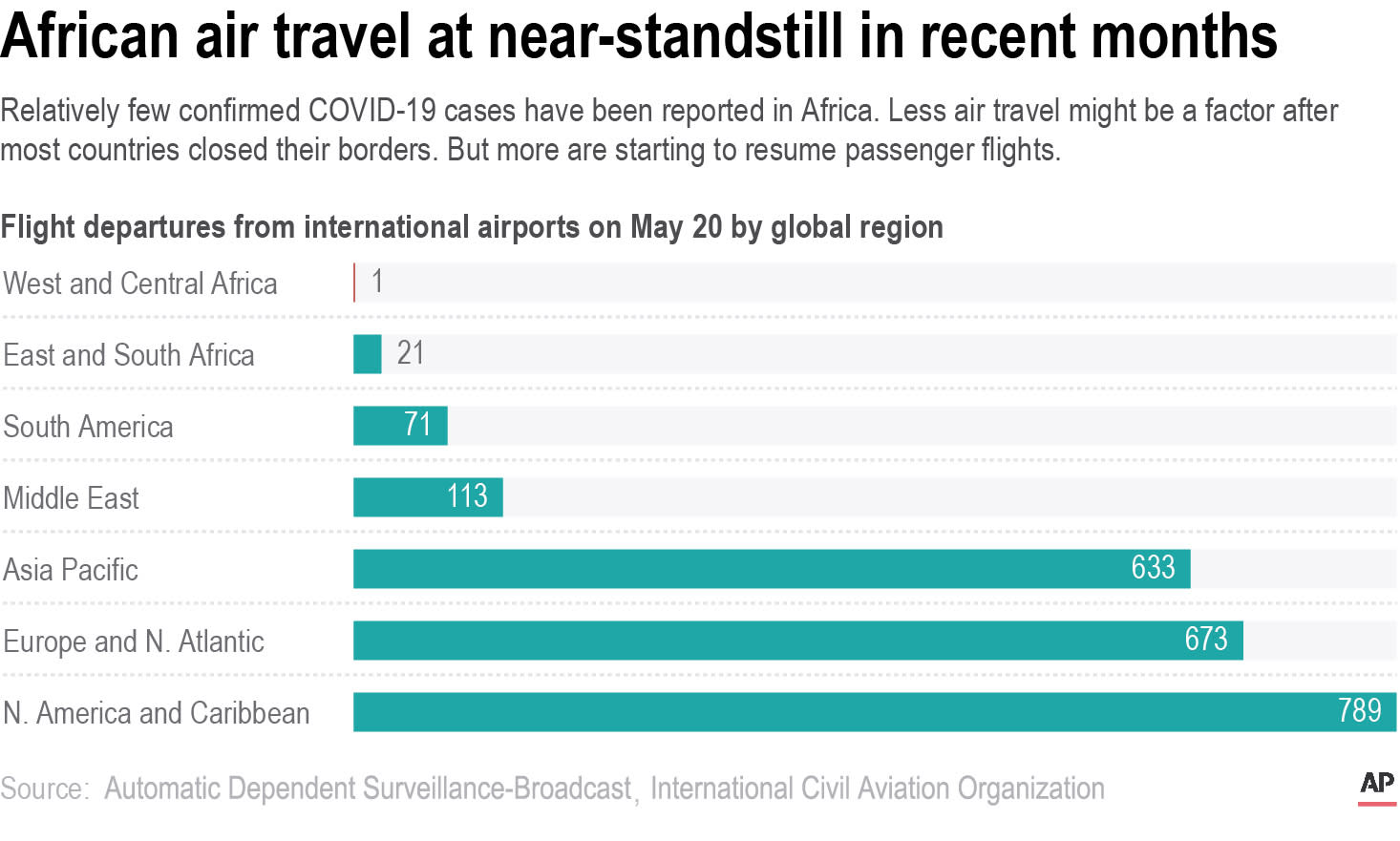 JOHANNESBURG (AP) — As COVID-19 cases surged in many parts of the world, the island nation of the Seychelles was looking good: 70-plus straight days without a single infection. Then the planes arrived.

Two chartered Air Seychelles flights carrying more than 200 passengers also brought the coronavirus. A few tested positive. Then, between June 24 and 30, the country’s confirmed cases shot from 11 to 81.

Now the Indian Ocean nation has delayed reopening for commercial flights for its lucrative tourism industry until Aug. 1, if all goes well.

African nations face a difficult choice as infections are rapidly rising: Welcome the international flights that originally brought COVID-19 to the ill-prepared continent, or further hurt their economies and restrict a lifeline for badly needed humanitarian aid.

“This is a very important moment,” the World Health Organization’s Africa chief, Matshidiso Moeti, told reporters on Thursday, a day after Egypt reopened its airports for the first time in more than three months.

Other countries are preparing to follow. That’s even as Africa had more than 463,000 confirmed virus cases as of Sunday and South Africa, its most developed economy, already struggles to care for COVID-19 patients.

But Africa’s economies are sick, too, its officials say. The continent faces its first recession in a quarter-century and has lost nearly $55 billion in the travel and tourism sectors in the past three months, the African Union says. Airlines alone have lost about $8 billion and some might not survive.

Most of Africa’s 54 countries closed their airspace to ward off the pandemic. That bought time to prepare, but it also hurt efforts to deliver life-saving medical supplies such as vaccines against other diseases. Shipments of personal protective gear and coronavirus testing materials, both in short supply, have been delayed.

“Many governments have decided travel needs to resume,” the WHO’s Africa chief said.

Africa has seen far fewer flights than other regions during the pandemic. Sometimes the entire West and Central African region saw just a single daily departure, according to International Civil Aviation Organization data.

Last week, the number of global flights jumped significantly. In the three-day period between June 30 and July 2, the daily number of departures increased from 3,960 to 6,508 as countries loosened restrictions, the data show.

African nations want to join the crowd. Senegal’s president has said international flights will begin on July 15. The 15-member Economic Community of West African States is expected to reopen its airspace on July 21. Nigeria has said domestic flights resume on July 8 and Rwanda on Aug. 1.

Kenya Airways wants to resume international flights. South Africa and Somalia are open for domestic ones, and Cameroon, Equatorial Guinea, Tanzania and Zambia now have commercial flights. Tanzania opened its skies weeks ago, hoping for a tourism boost despite widespread concern it’s hiding the extent of infections. It hasn’t updated case numbers since April.

“It’s good to be back!” Africa’s largest carrier, Ethiopian Airlines, declared late last month. After scrambling to revamp its services for cargo and repatriation flights in the past few months, it now wants to play a leading a role in “the new normal.”

That means face masks are mandatory on board. But the WHO’s Africa chief hopes to see all airlines do more.

“Physical distancing should be encouraged by leaving seats vacant,” Moeti said. And she suggested that “when we see a flare-up that is unacceptable” in virus cases, the loosening of travel restrictions could be reversed.

The WHO recommends that countries look at whether the need to fight widespread virus transmission outweighs the economic benefits of opening borders. “It is also crucial to determine whether the health system can cope with a spike in imported cases,” it says.

Regional leaders of the International Air Transport Association and Airports Council International are ready to go. In an open letter to African ministers last month, they welcomed global guidelines developed by the ICAO for the return to travel after the aviation industry’s “biggest challenge of its history.”

They also urged African countries to “identify every opportunity where travel restrictions could be lifted … as soon as the epidemiological situation allows for it.”

As the continent slowly takes flight, some European nations and others are limiting entry to people from countries they feel are doing a good job of containing the virus. African nations can seize the moment and do more tourism at home, Amani Abou-Zeid, AU commissioner for infrastructure and energy, told reporters last week.

“This is an opportunity to encourage Africans to see Africa,” she said.

Not always. The 70 recently infected people in the Seychelles, all crew members from West African countries meant to work on tuna fishing vessels, were isolated on boats in a special quarantine zone in the harbor in the capital.

Don't Miss it Suppose a ‘delicate’ case of Covid-19 doesn’t sound so dangerous? Suppose once more
Up Next China detains professor who criticised Xi over coronavirus