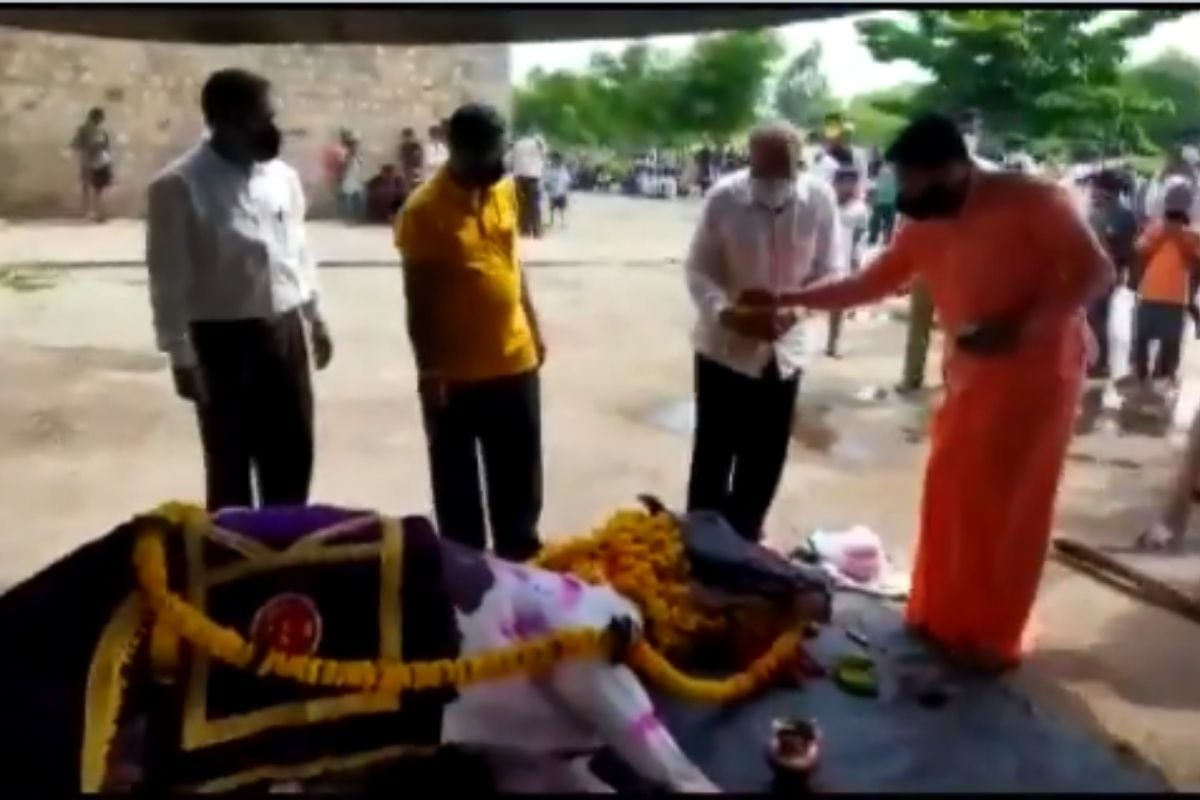 Hundreds of people violated covid-19 restrictions to gather for the funeral of a horse in a Karnataka village.

At a time, when India is reeling under the devastating second wave of coronavirus with multiple states going under lockdown, social distancing has become the need of the hour. According to reports, adhering to covid guidelines largely helps in containing the spread of this deadly virus. States have put strict curbs on social and religious gatherings, with a limited number of people allowed to attend the funeral. Amid such a health emergency, it seems the gathering of people can’t be entirely stopped as another incident from Karnataka’s Belagavi district has sent covid guidelines for a toss.

Hundreds of people were seen gathering for the funeral of a horse that belonged to a local religious organisation in Maradimath area. Visuals reported by ANI show scores of people walking shoulder-to-shoulder with many without face masks.

Taking cognisance of the matter, Karnatak Home Minister Basavaraj Bommai said the district administration will look into the matter and appropriate action will be taken.

#WATCH Hundreds of people were seen at the funeral of a horse in the Maradimath area of Belagavi, yesterday, in violation of current COVID19 restrictions in force in Karnataka pic.twitter.com/O3tdIUNaBN— ANI (@ANI) May 24, 2021

The district administration will look into this incident, and action will be taken: Karnataka Home Minister Basavaraj Bommai on hundreds gathered for the funeral of a horse in Belagavi yesterday pic.twitter.com/6aZPXVrs3K— ANI (@ANI) May 24, 2021

Speaking to NDTV, the Superintendent of Police of Belgavi, Laxman Nimbargi explained that the horse from the Mastmaradi village died on Sunday morning, following which villagers took out a huge procession to cremate it. Authorities have now sealed the village for the next 14 days conducting RT-PCR tests on a large scale.

The incident infuriated netizens, who took to the post to express their anger and frustration.

“funeral of a horse” ?Naah Naah.. they are preparing for their own funeral ..

The incident comes at a time when Karnataka recorded the highest single-day death toll at 626 on Sunday, even when positive cases are coming down in the state. The state is currently under a lockdown that will remain in force till June 7.