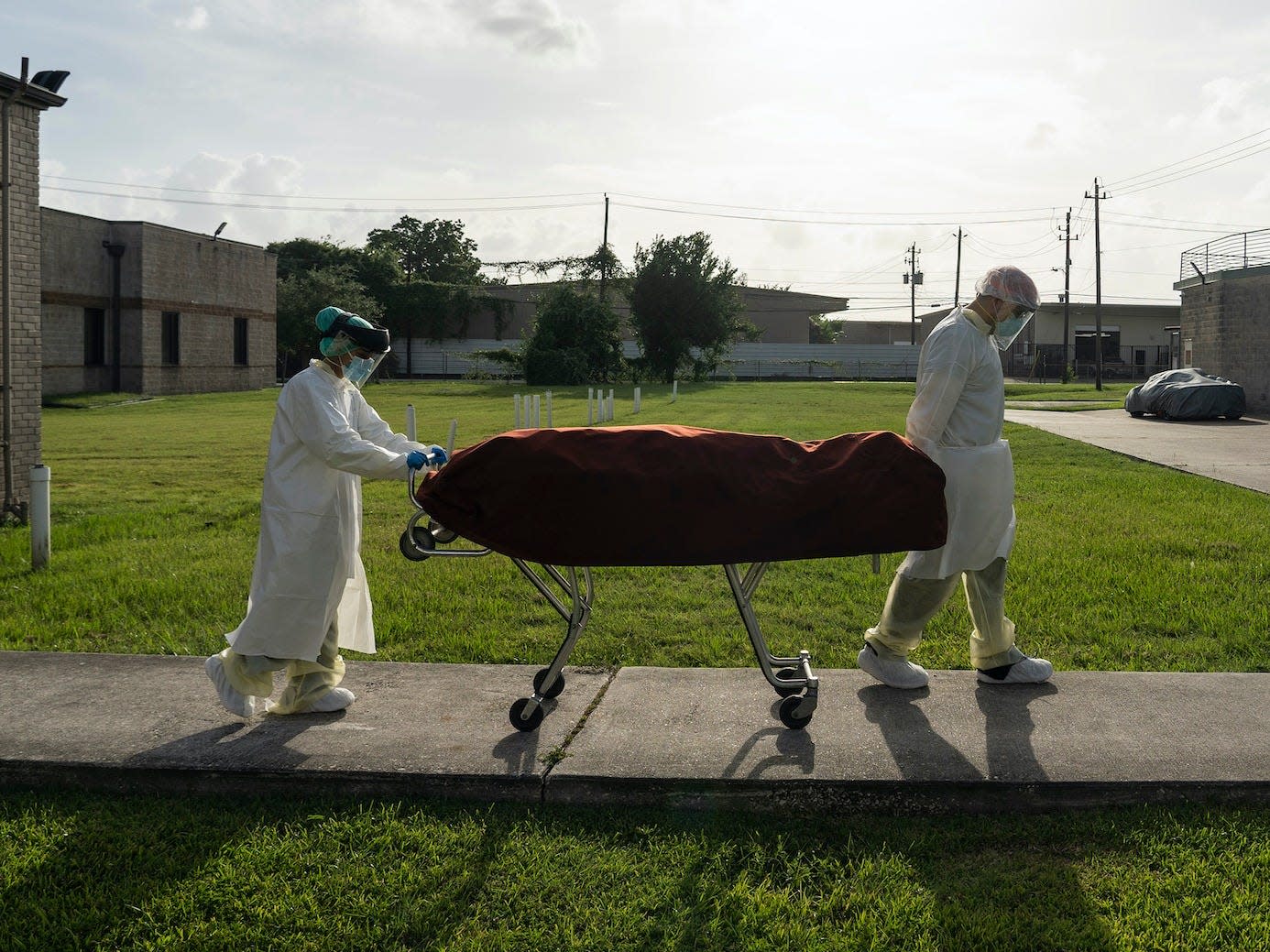 Medical staff wearing full PPE push a stretcher with a deceased patient to a car outside of the Covid-19 intensive care unit at the United Memorial Medical Center on June 30, 2020 in Houston, Texas.

A conservative man in Texas has recounted in an essay for the Dallas Voice how he went from coronavirus denier to believer after he hosted a party and almost his entire family got sick.

Believing the virus was a hoax, Tony Green and his partner hosted a house party wth family on June 12, he said.

Within days the virus spread rapidly throughout their families, and Green himself was hospitalized.

“To ignore or question the validity of this virus, its contagiousness or the consequences of selfish attitudes is — at this stage — completely stupid,” Green wrote.

President Donald Trump’s initial refusal to acknowledge the severity of the US coronavirus outbreak has left many Republicans refusing to take public-health advice seriously.

A conservative man in Texas has written a powerful essay saying he once believed the coronavirus was a hoax, but has now had a dramatic change of heart after he and his entire family tested positive for COVID-19 following a party at his house.

In a column for Texas LGBTQ news outlet Dallas Voice, published last weekend, consultant and lobbyist Tony Green admitted to “traveling deep into the conspiracy trap over COVID-19,” adding that he is a “gay conservative” who voted for President Donald Trump in 2016.

“All the defiant behavior of Trump’s more radical and rowdy cult followers, I participated in it. I was a hard-ass that stood up for my ‘God-given rights,'” he wrote.

“In great haste, I began prognosticating the alphabet soup about this ‘scamdemic.’ I believed the virus to be a hoax. I believed the mainstream media and the Democrats were using it to create panic, crash the economy and destroy Trump’s chances at reelection.”

Green’s belief that the virus was fake prompted him and his partner to host a house party on June 13 for family members. He did not say how many people attended.

The next morning, Green woke up sick, and over the following days the virus continued to spread throughout both his and his partner’s families — including his father-in-law’s mother, who died of COVID-19 on July 1.

Green himself and his father-in-law were both hospitalized for the virus.

‘You cannot imagine the guilt I feel’

Catching the coronavirus has changed Green’s mind on the issue, and he’s now calling for an end to the politicization over the virus.

“For those who deny the virus exists or who downplay its severity, let me assure you: The coronavirus is very real and extremely contagious,” he added. “Before you even know you have it, you’ve passed it along to your friends, family, coworkers and neighbors.”

President Donald Trump wearing a face mask in public for the first time during a visit to the Walter Reed National Military Medical Center in Bethesda, Maryland, on July 11, 2020.

Trump has for months downplayed the urgency of the US coronavirus outbreak, leaving many Republicans refusing to take the disease and public-health measures seriously. Social media sites like Facebook and YouTube have also been forced to take down popular videos and articles spreading misinformation about the virus.

Mask-wearing has also emerged as a politically divisive issue this year, with Trump himself refusing to wear one in public for months. Last month he told The Wall Street Journal he believed some Americans were wearing masks to express their disapproval of him.

The president endorsed mask-wearing and wore one in public for the first time earlier this month. His shift in tone was most likely prompted by tanking poll numbers and increasing concern from GOP lawmakers about the White House’s coronavirus response.

In his essay, Green urged Americans to take the virus seriously, saying it’s “foolish,” “selfish” and “completely stupid” to “ignore or question the validity of the virus.”

“You do not want your loved ones suffering and dying from this because you are taking a ‘political stand’ or protecting the economy over their lives,” he wrote.

The coronavirus has killed over 100,000 people in the US in just 4 months. This chart shows how that compares to other common causes of death.