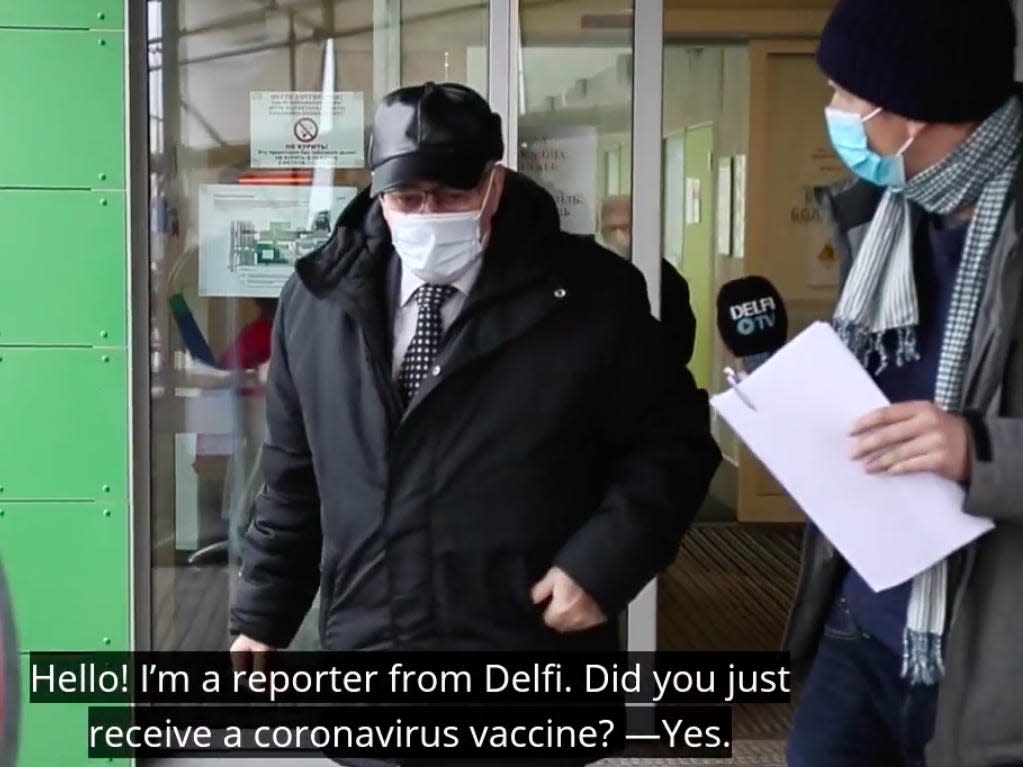 He got his second shot three days before his term ended and was to return to Moscow.

Russia has for months sought to discredit Pfizer’s vaccine and championed its homegrown Sputnik V.

A top Russian diplomat has admitted getting the Pfizer vaccine, shunning the Sputnik V shot developed by his own country.

Yuri Gribkov, who is Russia’s consul general to Estonia, was confronted by a reporter from the Estonian news outlet Delfi on Wednesday as he left a hospital in Ida-Viru, an Estonian town located 32 miles from the Russian border.

Gribkov’s term as consul general is due to end on Friday. He visited the hospital just after midday on Wednesday for what was his second shot of the two-dose Pfizer vaccine, Delfi reported.

When confronted by the reporter, Gribkov confirmed that he had just received the second dose, according to a video of the interaction published by The Daily Beast, which worked with Delfi on the investigation.

Russia approved the Sputnik V vaccine, developed by Moscow’s Gamaleya Research Institute, for emergency use in August 2020, and began inoculating citizens on December 7.

The emergency-use approval came before the vaccine completed phase-3 trials, and many everyday Russians have expressed doubt over its efficacy.

But Gribvok told The Daily Beast he didn’t wait to get vaccinated until he was back in Russia because his physician in Estonia had diagnosed him with “very weak lungs.”

“The Russian embassy like other foreign embassies received a diplomatic note from the Estonian Ministry of Foreign Affairs with a suggestion to have [diplomats] vaccinated,” Gribkov said.

Despite this, the footage will likely raise awkward questions for Gribkov upon his return to Russia, as Moscow has not approved any other vaccine.

Pro-Kremlin media have have for months sought to sully the reputation of non-Russian vaccines like Pfizer’s.

The outlets are trying to create the image that “Russia fights the pandemic more effectively than Western democracies, boosting the credibility of a Russian vaccine and undermining that of other [Western] vaccines,” according to the European Union-funded EUvsDisinfo campaign.

One of those was Tsargrad TV, owned by an oligarch ally of President Vladimir Putin, which on January 15 published eight articles that called the Pfizer vaccine the “shot of death,” The Daily Beast said.

Gribkov told The Daily Beast that he denied that Russian government officials had internally labelled the Pfizer shot as deadly.

“None of my colleagues, who I know for a long time, said that it is a ‘shot of death,'” he said.

Read more: Vaccine inequity on Capitol Hill: Members of Congress got the shots but essential Hill workers are left waiting

Pro-Kremlin disinformation networks have also sought to cast doubt on the efficacy of Pfizer’s shot on social media, according to a December 2020 report from the Delegation of the European Union to Azerbaijan.

The claims included that Pfizer used “fake clinical trials” and delayed news of its vaccine efficacy “to get rid of Trump.” Former President Donald Trump has also made the latter claim, accusing Pfizer of deliberately withholding its vaccine trial results until until after Election Day.

Russia has not approved Pfizer’s vaccine, but the company is considering seeking approval, according to the state-run TASS news agency.

Russian state media have also worked to rubbish a vaccine developed by AstraZeneca and Oxford University, calling it “the monkey vaccine” because it was widely tested on apes.

“Western vaccine developers are openly mocked on multilingual Russian state-controlled media, which has in some cases led to absurd claims that vaccines will turn people into monkeys,” Josep Borrell, the EU’s top diplomat, wrote in a December blog post.

However, Russia announced in December that it was working with AstraZeneca to explore whether their two vaccines could be combined.

That Gribkov was able to get two doses of a vaccine when the majority of Estonians haven’t had their first shots has not gone down well at the Ida-Viru Central Hospital, which has launched an inquiry.

“I can’t think of any regulations that would have allowed something like this to happen,” Tarmo Bakler, the hospital’s administrator, told The Daily Beast.

Dying of Florida physician after receiving COVID-19 vaccine below investigation