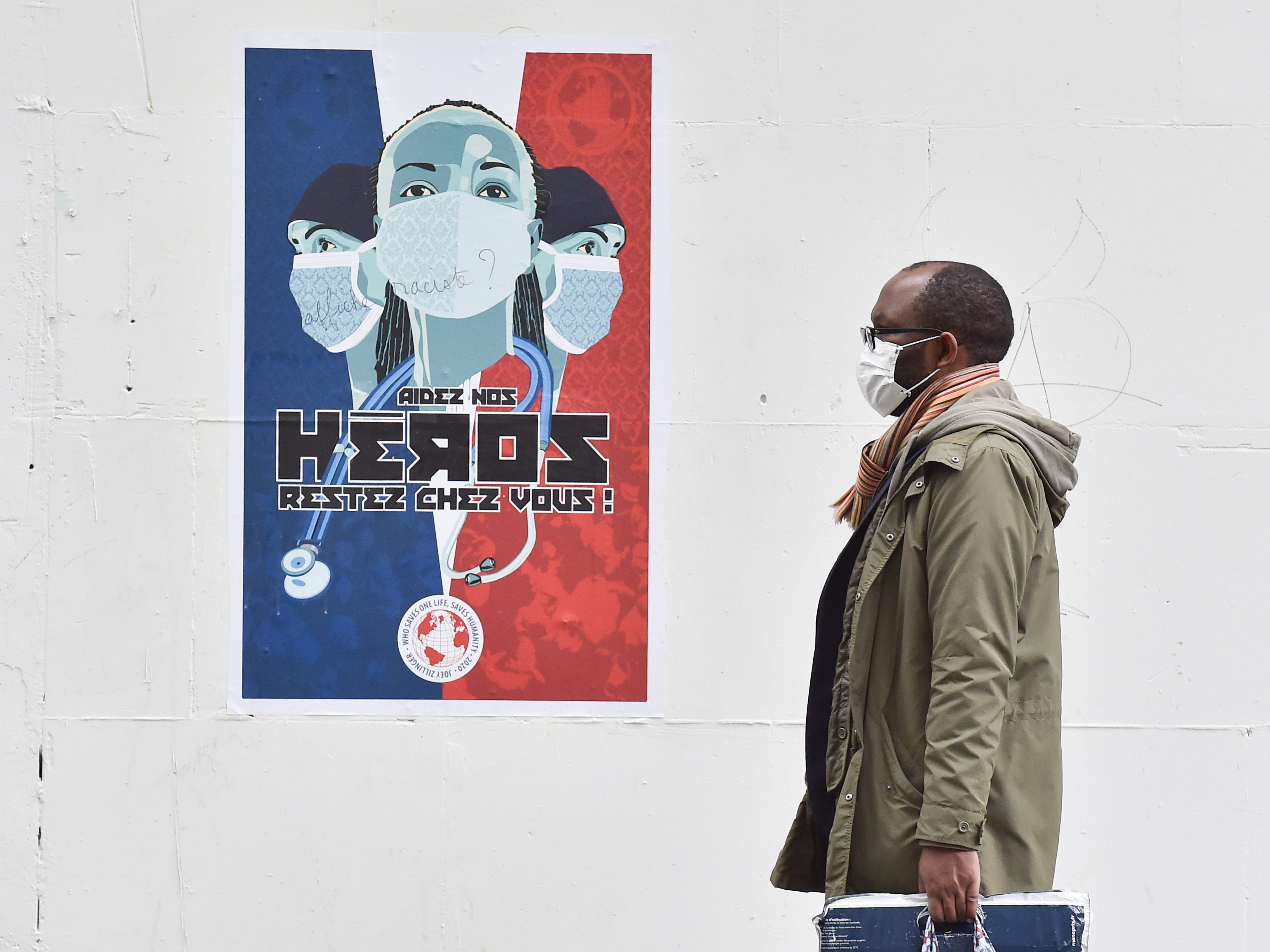 A man wearing a protective mask walks next to a poster with words “Help our heroes, stay at home” to support caregivers as the lockdown continues due to the coronavirus, May 4, 2020 in Paris, France.

A patient in France who was originally believed to have pneumonia late last year may have actually contracted the coronavirus.

The patient tested positive for COVID-19, the disease caused by the coronavirus, on December 27, said Dr. Yves Cohen, who treated the patient.

The results would mean he’s France’s new “patient zero,” and contracted the virus before China informed the WHO about the outbreak.

Some experts believe the results could be a false positive. Jonathan Ball, professor of molecular virology at the University of Nottingham, says contamination could have come “from the wider lab activities.”

A French patient may have contracted COVID-19, the disease caused by the coronavirus, a full month earlier than France’s previously known earliest case.

Amirouche Hammar, 43, tested negative for the flu when he first visited the Avicenne and Jean-Verdier hospital outside of Paris on December 27, to be treated for pneumonia. He was treated by Dr. Yves Cohen, head of the intensive care unit.

In a new study, Cohen and a team of researchers re-tested samples from 24 patients treated in December and January. Hammar’s sample tested positive for the coronavirus.

Previously, the first known COVID-19 case in France was reported to be on January 24. China first informed the World Health Organization of a new pneumonia outbreak on December 31.

Cohen told a French TV broadcaster BFM that because Hammar, who had not traveled abroad since August, was tested several times, a false positive was unlikely.

In the medical journal article co-written by Cohen and to be published in the International Journal of Microbial Agents, the authors said: “Based on this result, it appears that the COVID-19 epidemic started [in France] much earlier” than previously believed.

“He could be patient zero, but maybe there were others in other regions,” Cohen told BFM TV.

Across the world, health officials have scrambled to locate their respective “patient zero” cases, which become more difficult to find as the disease spreads. Identifying such a patient could provide clues about the emergence and spread of the virus, and potentially inform future preventive measures.

Andrew Brouwer, an assistant research scientist at the University of Michigan, told Business Insider that the information helps epidemiologists “reconstruct the history of the outbreak.”

“By the time we detect a severe case, there is already local transmission,” Brouwer said.

Doctors ran a PCR — or polymerase chain reaction — test on a stored sample from him. Those tests are highly sensitive, Brouwer said, leading him to believe the results are legitimate.

“DNA can be effectively preserved in stored samples, and PCR is highly sensitive, so I have no reason to doubt the result,” Brouwer wrote in an email.

But even though Hammar was tested several times, some experts say they may still be false positives.

The sensitivity of PCR could cut the other way, according to Jonathan Ball, professor of molecular virology at the University of Nottingham.

He said it makes it more likely for the test to pick up results from contamination.

Tourists wearing protective facemask walk in front of the Eiffel tower in Paris, on March 17, 2020 a few hours before the order of staying at home to all French citizens comes into effect, in order to avoid the spreading of the novel coronavirus.

“The PCR test is very sensitive, but therein lies a potential weakness — it is possible for contaminating viral genome from the wider lab activities to find its way into the odd tests and give a false-positive result,” Ball told Business Insider.

“Whilst it is certainly possible that a case of COVID could be exported from China very early in the outbreak, there is nothing in the data describing the spread of the virus in France or indeed cases of COVID-19 being admitted to French hospitals that would indicate an early introduction into France,” he wrote in an email.

Though Cohen’s paper says researchers took steps to avoid false negative results, it says they weren’t able to entirely rule them out “due to the sensitivity of [PCR] and a technique of storage that possibly damage the quality of the samples.”

Christian Lindmeier, a spokesperson for the World Health Organization, said at a UN briefing in Geneva Tuesday that countries checking records for cases from late 2019 would give a “new and clearer picture” of the pandemic’s timeline, and that a report of an earlier case in France is “not surprising.”

“It’s also possible there are more early cases to be found,” Lindmeier said.

US coronavirus deaths forecast to hit 180,000 by October