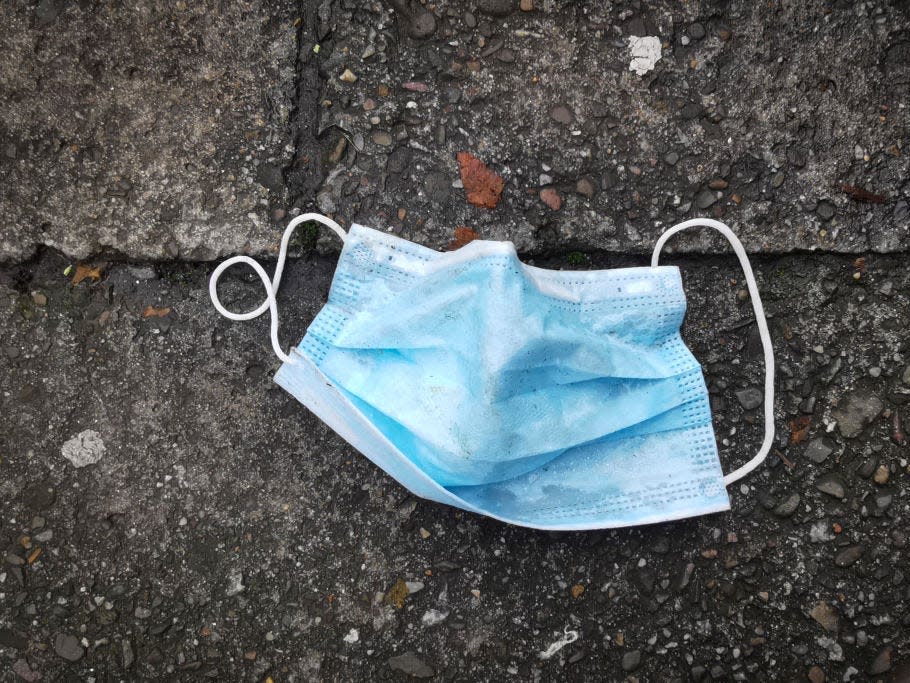 A disposable face masks is seen lying on the pavement during the coronavirus pandemic. Krakow, Poland on October 16th, 2020. Beata Zawrzel/NurPhoto via Getty Images

A man has been given 10 years in prison for attacking a person who asked him to pull up his mask.

The sentence is among the sternest yet nationwide related to an argument over face coverings.

A man in Iowa was sentenced to 10 years in prison on Wednesday after he attacked another man who asked him to pull up his face mask, according to the Des Moines Register.

Shane Wayne Michael, 42, got into the altercation in November last year when he went shopping in a Des Moines Vision 4 Less store.

According to a criminal complaint, Michael was approached by another customer in the store, Mark Dinning, who asked him to pull his face mask over his nose. The two men then “exchanged words” before both exiting the store and getting into a physical fight in the parking lot, the complaint said.

Read more: The 10 best states to start a business, ranked

Michael allegedly dropped Dinning to the ground before attacking his eyes and genitals.

The 42-year-old then allegedly proceeded to cough and spit in Dinning’s face while screaming: “If I have it, you have it,” the Register reported. Dinning later stated in a Facebook post that the attack almost caused him to lose his left eye according to the Washington Post.

Dinning also admitted to biting Michael’s left arm as the man had gouged him in his eyes.

However, Michael offered a different take on the story, telling police that Dinning had started the fight by shoulder-checking him into a car, which prompted him to push the man to the ground in self-defense.

However, multiple eyewitnesses confirmed to police that it was Michael who escalated the fight.

Michael was convicted by a jury last month of willful injury causing serious injury but was sentenced this week.

His father, Dennis Michael, told the Iowa Capital Dispatch that he believed the 10-year sentence did not match the crime.

“It’s like [Dinning] got a black eye in a bar fight, and now my son is getting 10 years in prison,” he said, according to the Dispatch.

He also said that his son had asthma and was “not going to cover his nose and mouth because he can’t breathe,” the Dispatch reported.

Michael’s sentence is among the most serious yet related to a mask dispute. Last year, a woman in Florida who purposely coughed on a customer at a Pier 1 store was sentenced to one month in jail, the Washington Post reported.

The official guidance on face coverings issued by the Centers for Disease Control and Prevention (CDC) says people should “put the mask over your nose and mouth and secure it under your chin.”

A face mask requirement in stores, issued by Iowa Gov. Kim Reynolds. was still in place at the time of the attack.