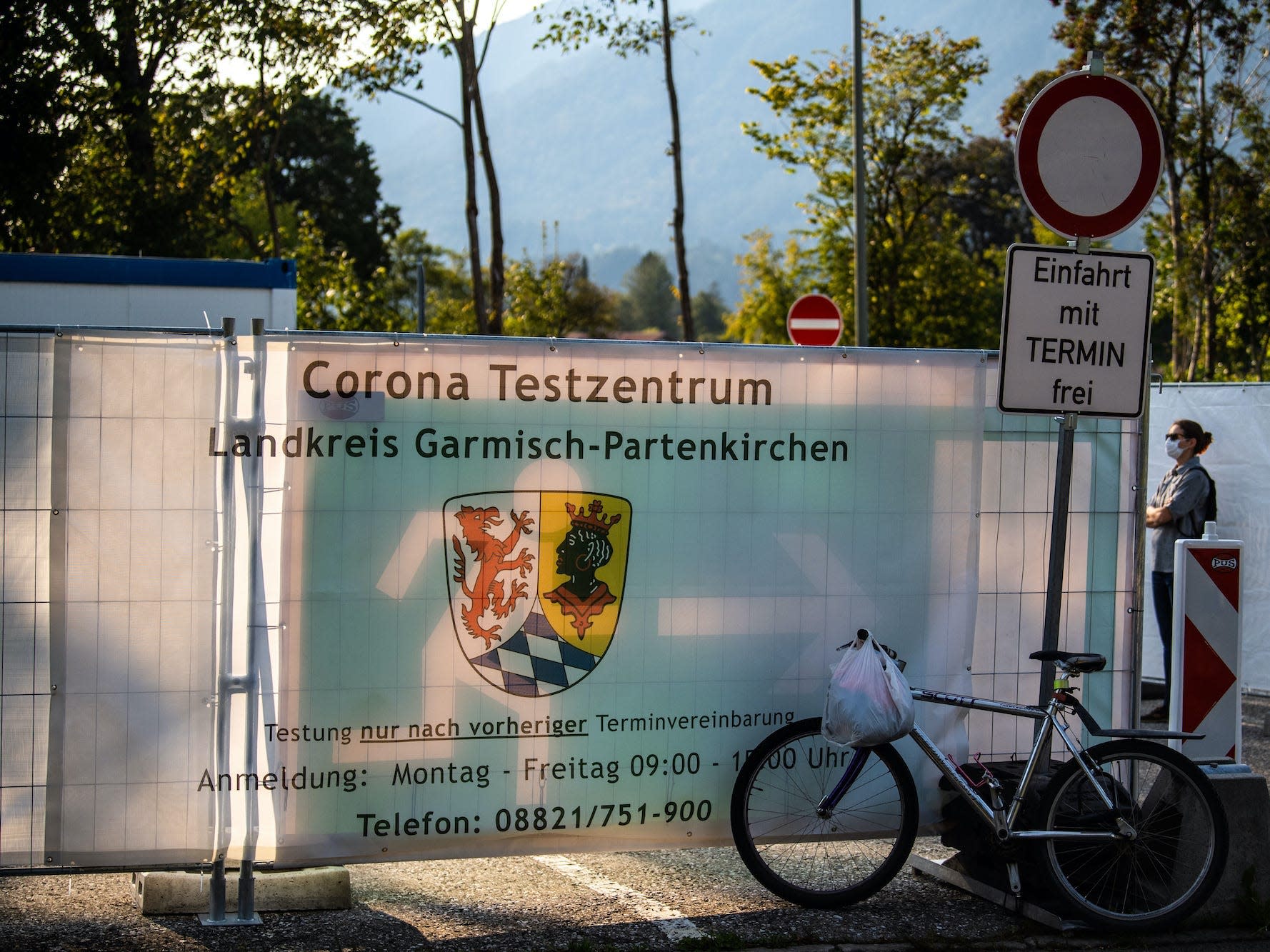 A virus test center in Garmisch-Partenkirchen, Germany, on September 13, 2020.

An American woman has been accused of causing a COVID-19 outbreak in a German town after going on a bar crawl while showing symptoms, according to multiple outlets.

The unnamed 26-year-old, who works at a hotel for US armed forces and their families in Garmisch-Partenkirchen, Bavaria, was tested on September 8 and told to quarantine until the results were ready, reports said.

However, she went out to a series of bars, including a karaoke bar, local media reported. Her test came back positive the next morning.

Since last Monday, at least 24 people at the hotel have tested positive for COVID-19, according to Der Spiegel, with a total 49 new infections in the town.

Markus Söder, the prime minister of the Bavaria region, said there would be “consequences.” German lawyers told The Guardian that the woman could also face criminal proceedings.

German authorities have accused an American woman of causing a coronavirus outbreak in a Bavarian town after she broke quarantine instructions to go on a bar crawl, local media reported.

On September 8, the unnamed 26-year-old was tested for COVID-19 in the Garmisch-Partenkirchen ski town after she reported symptoms following a vacation to Greece, the Der Tagesspiegel, Der Spiegel, and The Guardian newspapers reported.

The woman, who works at a hotel for members of the US armed forces and their families, was told to self-isolate until her results became available the following morning, The Guardian reported.

However, authorities in the town said the woman ignored the advice and went out to a series of bars that night, the newspapers reported.

She received a positive test the next morning, the outlets said.

The centre of Garmisch-Partenkirchen, Upper Bavaria, seen on September 13, 2020.

At least 24 people and staff at the hotel have since tested positive for COVID-19, Der Tagesspiegel and Der Speigel reported. The town has also recorded 49 new coronavirus cases in the last seven days, the newspapers said, citing authorities.

The district office in Garmisch has also asked all 18- to 35-year-olds to get tested for the coronavirus, the newspapers said. More than 700 people in the town have taken coronavirus tests since, and results are expected this week, Der Spiegel reported.

The public prosecutor’s office in Munich is now investigating the case as a suspected “super spreader” incident, Zeit Online reported on Monday.

“This carelessness must also have consequences,” said Markus Söder, the prime minister of the Bavaria region, adding that in Bavaria the fine for breaking quarantine is 2,000 euros ($2,370).

German lawyers also told The Guardian that the woman could “also face both civil and criminal proceedings carrying a prison sentence of between six months and 10 years.”

As a result of the latest outbreak, all bars and restaurants in Garmisch-Partenkirchen have been told to close by 10 p.m.

The woman’s hotel, The Edelweiss Lodge and Resort, is also closed for two weeks from Monday.

Germany gradually lifted its national lockdown around end April, but has imposed partial lockdowns in various regions as and when new spikes arose.