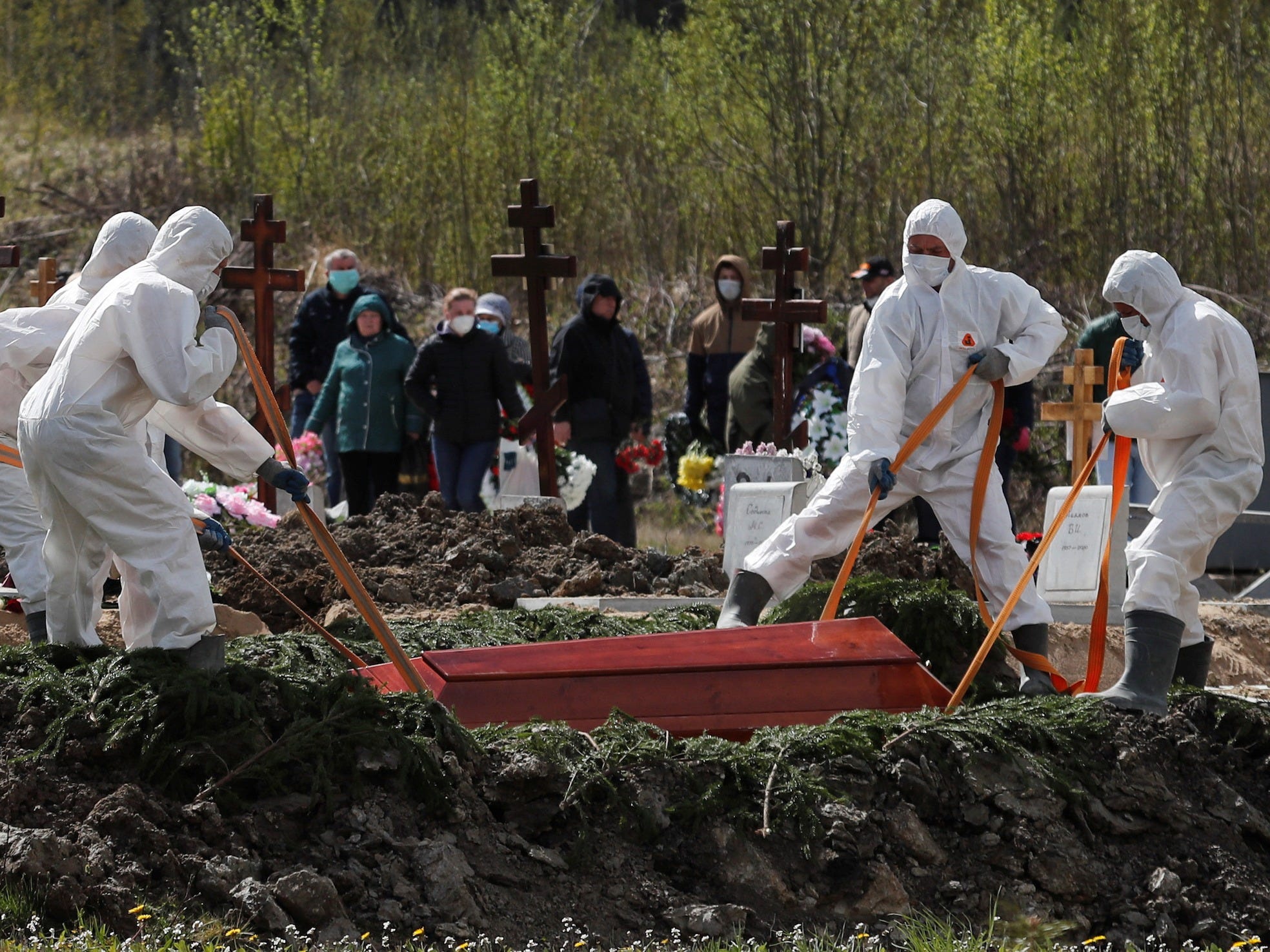 Grave diggers lower the coffin of a person who presumably died of the coronavirus, as mourners wearing face masks gather in the special purpose section of a graveyard on the outskirts of Saint Petersburg, Russia, May 13, 2020.

The coronavirus’ death rate — a calculation of deaths out of total confirmed cases — varies by place and population.

Eight countries currently have death rates higher than 10%, while others are lower than 1%.

Factors like a population’s average age, a country’s testing capacity, and government responses can influence the death rate.

Experts think the true death rate may be as low as 1% if everybody were tested, but that’s still far deadlier than the flu.

The most straightforward answer may seem to be the “case fatality rate,” a calculation of the number of known deaths out of the total number of confirmed cases. But it doesn’t tell the full story.

Globally, that death rate was 6.7% as of Wednesday, according to the World Health Organization; it has hovered around 7% since mid-April.

That’s a significant increase from March, when the death rate was around 3.4%. But that doesn’t necessarily mean the virus has changed, since death-rate calculations depend on how many cases are confirmed by tests. The high global death rate could point to coronavirus testing limitations across the globe.

“There is no way that we record all the cases, though we probably record most of the deaths,” John Edmunds, a professor of infectious-disease modeling at the London School of Hygiene & Tropical Medicine, told Business Insider in an email. “[Case fatality rates] are not very good measures, as they are more a measure of how much testing and case finding you do.”

In general, the more cases that are included in the data — including people with mild or no symptoms — the lower the death rate.

Plus, new deaths being documented now are generally people who fell ill three to four weeks ago — when many countries’ outbreaks were peaking. Because the disease progresses over a period of weeks, and because these numbers are constantly changing, the rate is not static and will continue evolving. It is not a reflection of the likelihood that any given person will die if infected.

Eight countries have death rates higher than 10%: Belgium, France, Italy, Mexico, the Netherlands, Spain, Sweden, and the UK, according to a Johns Hopkins University database. Other places like Singapore, which has a robust testing program, have reported rates as low as 0.1%.

A number of factors can drive death rates up. Sweden, for example, never issued a mandatory lockdown, instead asking its citizens to voluntarily maintain social distance. Experts warned early on that this strategy could lead to more death. The virus might also be reaching more elderly people there, who are more susceptible to severe illness.

High death rates could also be the result of limited testing capacity. Countries with scarce testing resources tend to prioritize the most severe cases for COVID-19 confirmation, leaving many people with mild or asymptomatic cases undetected, thus giving the appearance of an unusually high death rate. Sweden has only just expanded its testing to include those with mild symptoms.

‘COVID-19 infection is deadlier than flu’Mourners carry the coffin of Valnir Mendes da Silva, 62, who died on a sidewalk in the Arara slum in Rio de Janeiro, Brazil, after experiencing difficulty breathing during the coronavirus outbreak, May 18, 2020.

The science and data make one thing clear: COVID-19 is far more deadly than the seasonal flu.

A new study from the University of Washington estimated that, if all infections were known, the true death rate for Americans who show symptoms would be about 1.3%. That’s far lower than what confirmed case counts suggest, but it’s 13 times higher than the 0.1% death rate of seasonal flu.

“COVID-19 infection is deadlier than flu — we can put that debate to rest,” Anirban Basu, a statistician and professor of health economics who authored the study, said in a press release.

The death rate that Basu’s team calculated aligns with earlier estimates of around 1% from experts like Dr. Anthony Fauci, director of the National Institute of Allergy and Infectious Diseases.

Cots are set up at a possible COVID-19 treatment site in San Mateo, California, April 1, 2020.

Another statistician, Dr. John Ioannidis at Stanford, found a much lower death rate in his own analysis: 0.02% to 0.4%. But many researchers critiqued that research, saying that it was based on flawed studies and left out findings that suggested higher death rates.

But even if Ioannidis’s calculation were correct, experts say that would still be no reason to treat the coronavirus like the flu.

“COVID death totals will be much, much greater than the flu,” Andrew Noymer, an associate professor of public health at UC Irvine and an expert in flu pandemics, told The San Jose Mercury News.

That’s because populations worldwide have significant levels of immunity to the flu through annual vaccines, and some have natural immunity through exposure. That is not the case with the coronavirus.