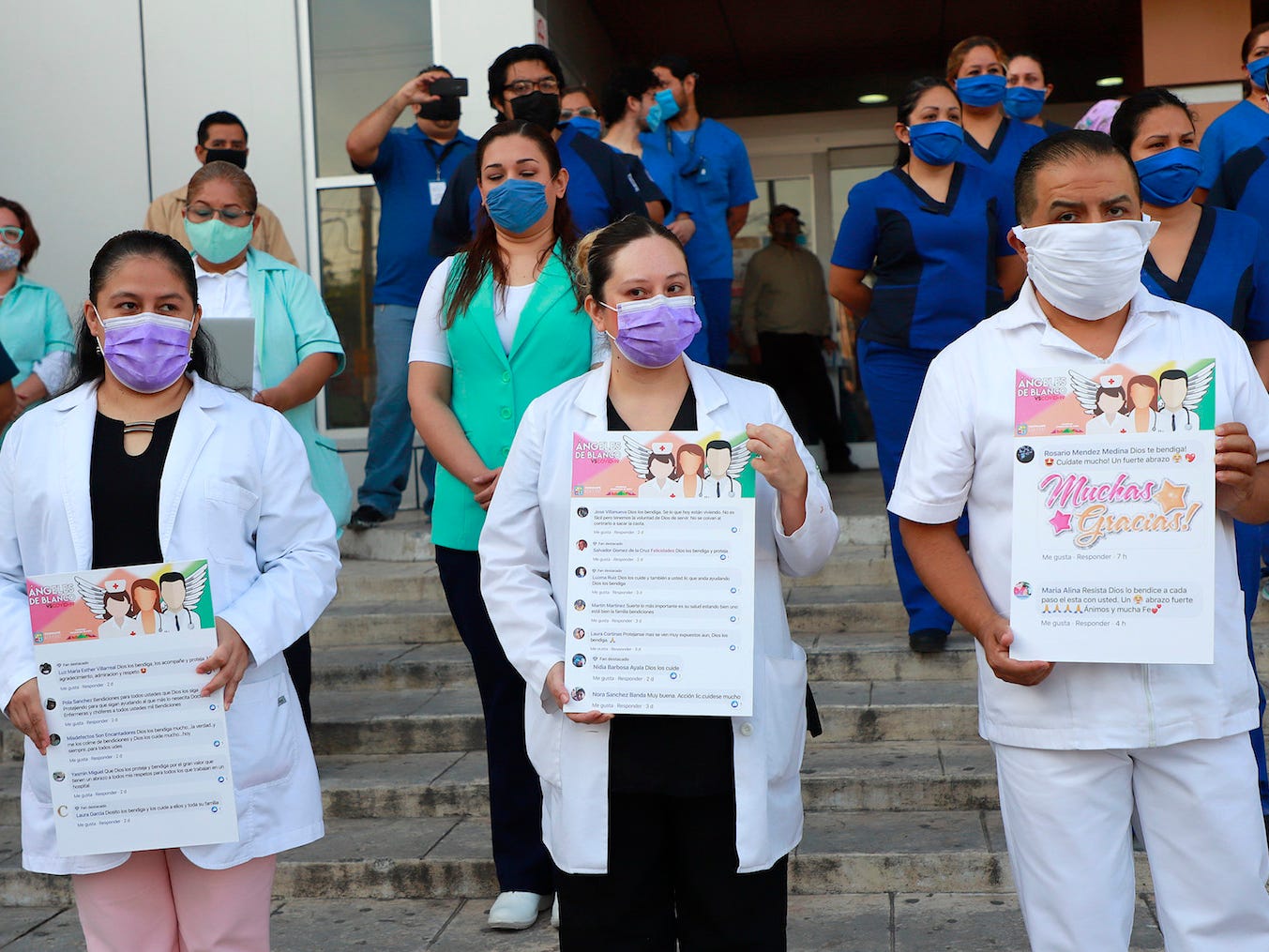 Nurses pose with their recognition for their work at the General Hospital of Zone 4 of the IMSS on April 20, 2020 in Nuevo Leon, Mexico.

Three nurses have been strangled to death in Mexico, as the country sees an increase in assaults targeting health care workers, who are being wrongly accused of spreading the coronavirus.

There is no immediate evidence that the triple murder, which occurred in the northern city of Torreon, is related to their line of work, Mexican officials said.

But the horrific crime comes amid a rise in assaults on health care workers in the country, which includes kicking them off public transport, barring them from their own homes, and pouring bleach on them.

Mexican authorities believe that the attacks are most likely linked to rumors that doctors and nurses are responsible for spreading the virus.

The country has recorded at least 44 attacks against medical personnel between mid-March and mid-April, according to data provided to CNN by Mexico’s National Council to Prevent Discrimination.

Three nurses have been found strangled to death in Mexico amid an alarming increase of assaults on health care workers in the country, who are being wrongly accused of spreading the coronavirus.

The nurses, who were all sisters, were found dead in a house in Torreon, a city in northern Mexican state of Coahuila, state police said on Friday.

One of the sisters was working as a hospital administrator, while the other two were nurses for the Mexican Social Security Institute, according to Associated Press (AP).

There was no immediate evidence that the attack was related to their work, and so far no arrests have been made, but Mexican officials said they were investigating the crime, AP reported.

Javier Guerrero, a top official for the country’s largest public health service, said that the three deaths “happened at a moment when our health workers are the most important element to face the health crisis,” according to a Reuters report.

The triple murder is the latest in a series of attacks on doctors and nurses in the country, which has included assaulting them, kicking them off public transport, and barring them from their own homes.

A health worker wearing protective suit moves a woman suspected of being infected with the coronavirus at Hospital General de Mexico in Mexico City on May 7, 2020.

In one instance, a doctor from the western city of Guadalajara had bleach poured all over her as she walked home from a hospital shift one morning, according to CNN. The attack, which happened in April, left her with conjunctivitis and burns on her skin.

“They picked me out because I was wearing scrubs. I didn’t see anything — I don’t know who it was, but I know they attacked another doctor on the same day,” the doctor told CNN.

Mexican authorities believe that the series of attacks are most likely linked to rumors that doctors and nurses are responsible for spreading the contagious virus throughout the country.

The country has recorded at least 44 attacks against medical personnel between mid-March and mid-April, according to data provided to CNN by Mexico’s National Council to Prevent Discrimination.

Mexican health authorities have since urged medical staff to not wear their uniforms or scrubs in public to avoid being targeted.

The head of nursing for the Mexican Social Security Institue, Fabiana Zepeda, told reporters: “I have worn my nurse’s uniform for 27 years with great pride — as do doctors. But today we are taking off our uniforms because we don’t want to be injured.”

“We beg those people who have attacked doctors and nurses to reconsider. We could end up saving your lives,” she added.

At the time of writing, Mexico has seen more than 33,000 confirmed coronavirus cases and around 3,000 deaths, according to Worldometer.